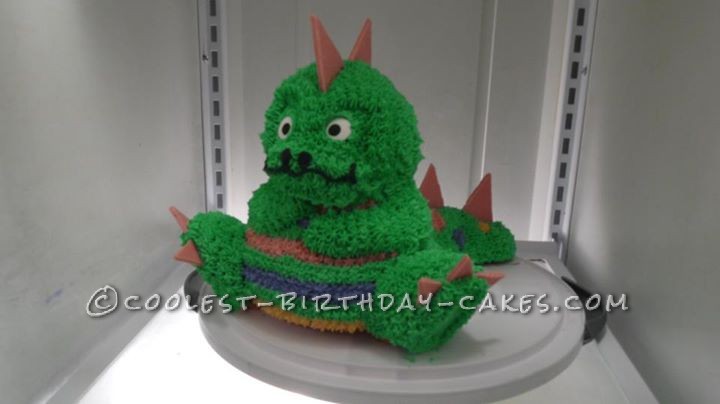 So, how many 3 year old little girls want a dinosaur birthday party? My granddaugher of course. This cake was quite the adventure. It was made using  the Wilton upright 3-D bear pan which I’d never used. I made a sampler bear  the week before the actual party just to make sure it really looked like I knew what I was doing. I’m not a professional baker so this cake was going to be a challenge to say the least.

Two nights before the party, I successfully baked the bear cake again which stood upright to my delight. Hmmmm, now where to store this almost life size infant bear cub cake during the tail end of a California heat wave with no A/C…. why…. the center shelf of my side by side refrigerator of course – out went anything that wasn’t going be eaten or drunk that same day, oh well, that half gallon of milk was probably on it’s last leg anyway. Oh the sacrifices we make.  I also baked a very small oval cake (to have extra for the tail). I used the cake recipe  directions from the Wilton instructions for a denser cake. ….. sooo…. baking the cake and storing it was, by far, the easiest part of this adventure.

I decided to wait until the day before the party to start decorating. Friday, after work, I came home around 3:30pm, and started removing all bear parts that weren’t necessary for a dinosaur… no cute cub ears for this green little gal… and adding parts that a bear would probaly love to have, a tapered long tail of course. I shaped the tail and “glued” it to the back of my dino with frosting.

Now to tint the buttercream frosting. I used Wilton butter cream because, let’s face it, home made butter cream is a lot of work….no time for that. I got me a Dino cake to make. I used Kelly green for the main Dino coat (does a dinosaur have a coat? probably not) and light pink and lavender for the tummy stripes. You never know how much respect you can have for a cake decorator until you’ve piped 1000 stars (okay, maybe not 1000 but it was A LOT) onto a Dino cake.

Now time for the face….okay Veronica, you’ve only got one shot at this, one wrong move and that’s it…you’re piping MORE stars to fix your mistake. Ahhh, as luck would have it, no mistakes with the black nose and mouth…phew… giant candy googly eyes in place and the face looks terrific!

No dinosaur is complete until the ferocious spikes are in place. I know I sound like a Wilton commercial, but I did use the pink Wilton candy melts for the spikes. I poured the melted pink stuff about 1/8 inch thick onto a lined cutting board and let it set in the freezer a few minutes. Once it was hard, I used a sharp knife to cut triangles that were all approximately the same size. Yes, I had more unusable triangles than usable ones, but in the end I had enough to run spikes, literally, from head to tail to toe.

So, remember, I started all this around 3:30pm. By the time I was completely finished and ready to return what was once a cuddly teddy bear cake now turned ferocious feminine smerky reptile back to it’s spot in the fridge where it resides alone on a shelf. It was about 2:00 a.m…..yes, 2:00 a.m. I was sooo tired but so excited at how wonderful this “act of love” turned out!  Would I ever do that again?? You betcha! My granddaughter absolutely loved her dinosaur cake and it was the hit of the party!