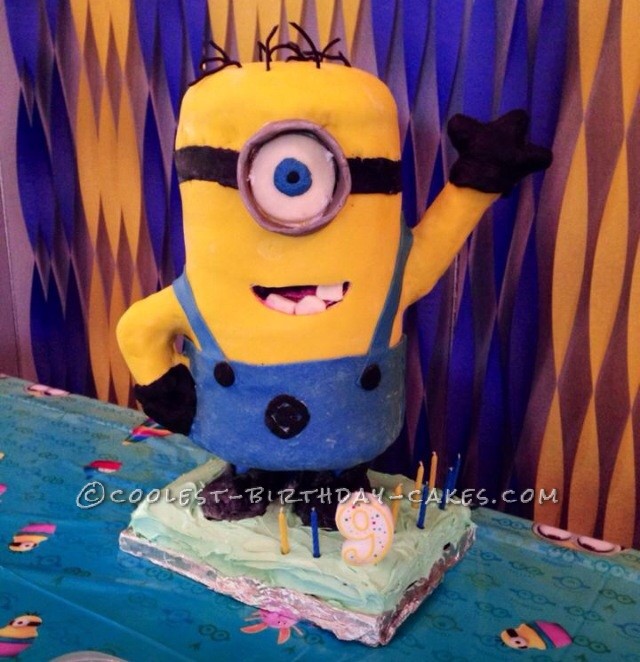 I told my wife I would make the cake for my sons 9th birthday. He wanted a minion themed party so I made a minion cake. My wife was expecting a normal cake cooked on a pan laying flat and cut out in the shape of a minion. I had something a little more elaborate in mind.

I had never done anything like this before, so I had to do some research on how to make modeling chocolate. I am a cabinet maker not a cake baker so there was a bit of a learning curve. I do enjoy doing things I’ve never done before though. I started out by making a plywood base the size of the base cake which is just a rectangular cake. I then screwed to 1x2s to the base for legs. I then cut out two 8″ circles of plywood to be used as supports in the cake. One was attached to the legs to help form the base of the body, the other was used to attach the arms, which were made of copper tubing. I then baked the cakes one rectangle and 6 round cakes. I made some butter cream icing to stick everything together.  I had to research that too.

Once I got the cakes stacked I trimmed the top one to round it off into the shape of the minions head. I then made a couple of batches of Rice Krispie treats to form the bottom of the body the legs and shoes, and also the arms and hands.  Arms and hands were formed around the copper tubes, legs and shoes were formed around the 1x2s. I had previously covered everything with aluminum foil. I then made  5 batches of modeling chocolate. I colored them the various colors needed for the cake. I used a quality white chocolate for most of it, but for the black I used a quality dark chocolate then cored it black. It is much easier to make a black modeling chocolate with a dark chocolate than a white chocolate.  I then cut and shaped the chocolate into the various shapes needed. Applied butter cream icing everywhere and applied the modeling chocolate. The hair is made from licorice rope everything else on the minion is modeling chocolate the green on the base cake is butter cream.

The overall height of the cake is about 20″. In all it took me about 17 hours from beginning to end. I did it all in one day. My wife was very surprised and my son was even more surprised. the most asked question by people at the party was “is that all edible.”  I really enjoyed making it but I don’t know that I would do it again. I guess if I did it all the time it wouldn’t take as long.