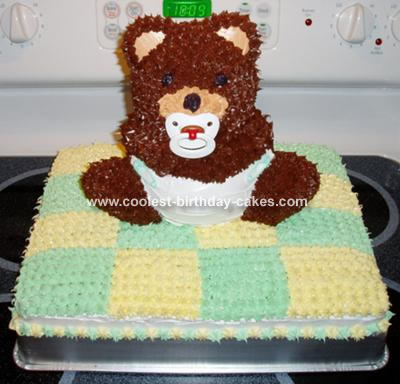 I made this baby bear cake for a co workers surprise baby shower. She didn’t know if she was having a boy or girl so I used green and yellow.

I used boxed cake mix and canned icing. I baked the cakes the day before and loosely covered them. The next day I placed the bear on the middle of the sheet cake and used a dowel in the center since I would be traveling with the cake.

Then I decorated the sheet cake to look like a blanket. I put a diaper on the bear using fluffy white icing but forgot to take the diaper around to the back. No one noticed until I told them!

Then I did the smooth parts of the face. I used a star tip for the bears fur and cut the tip of a binkie off and hot glued a thin dowel to it so I could push it into the cake. I used 2 small plastic diaper pins on the diaper. Have fun!