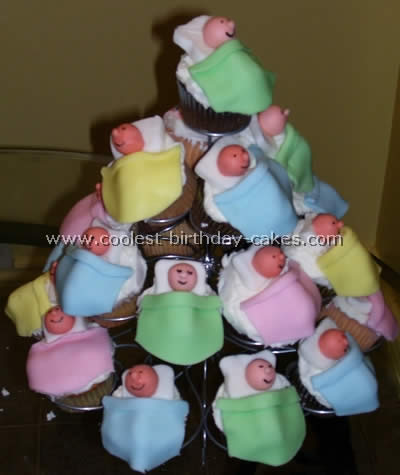 I saw these baby shower cupcakes in the Wilton 2006 yearbook and thought it would be a great cake for an upcoming baby shower. I bought the pre-colored pastel rolled fondant pack to save time for the blankets but still needed a small batch of skin tone for the babies’ heads and bodies. I used the edible ink pens to draw on the faces and hair curls – much easier than trying to draw them on with food coloring and a toothpick!

I made 12 chocolate and 11 white cakes so everyone got their favorite – I just used two colour blankets for each flavor so it was easy enough to tell which flavor was which.

Cupcake by Heidi B., Valdosta, GA

I used a regular sized box of cake mix and made these baby shower cupcakes in the Wilton jumbo size cupcake liners. (They were foil ones so I didn’t need a jumbo sized cupcake pan.) I made the frosting from a recipe for butter cream icing from the Wilton Web site and used the flesh colored food coloring to color it.

Before icing the cupcakes I dug a small hole in the cupcakes for a mouth. Then I iced all the cupcakes taking note of where the hole for the mouth is. I stuck real pacifiers (Nuk newborn…found them on eBay for under $1 each) into the mouth holes. Then I took mini chocolate chips and stuck them in upside down for the eyes.

First I got this idea for baby shower cupcakes from a Wilton cake book. I made white cupcakes and frosted them in buttercream icing. I used fondant to shape the pillows heads noses bodies and blankets. I used a food writer pen to draw on the faces.

These baby shower cupcakes are a hit at baby showers. The pacifiers are candy melts with a gummy lifesaver in them and the eyes, hair and mouth are all Chocolate melts.

The icing is buttercream icing with a little copper and yellow to make skin tone color. The pacifiers and hair are made in advance; the mouth and eyes are piped on after they are iced.