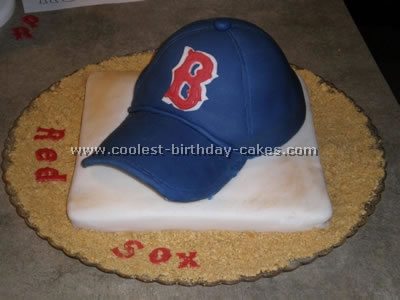 My friend Julie and I made this hat cake for our supervisor who adores the Red Sox. The base is a 10″ square iced and covered in white fondant. The hat is half of a Wilton’s sports ball pan and an 8″ round shaped down to match the half ball shape about 1.5″ cut off around the circle.

We used the Wilton’s butter cake recipe since it was much more dense and easy to sculpt. That was iced and covered in fondant that was tinted dark blue. We used lots of food coloring and white fondant. The bill of the hat is fondant over thin cardboard and shaped to form. Since we had less time to let it dry we stabilized the bill to the hat and placed toothpicks near the edge so the bill wouldn’t fall. The ends were clipped close to the bill’s edge and covered with small patches of fondant. Stitching was done with toothpicks and a knife to simulate the stitches.

The B was cut out of fondant and red chocolate candy wafers were used for the B and Red Sox letters. Graham crackers were crushed for dirt and the base was dusted with cinnamon to give it a dirty appearance