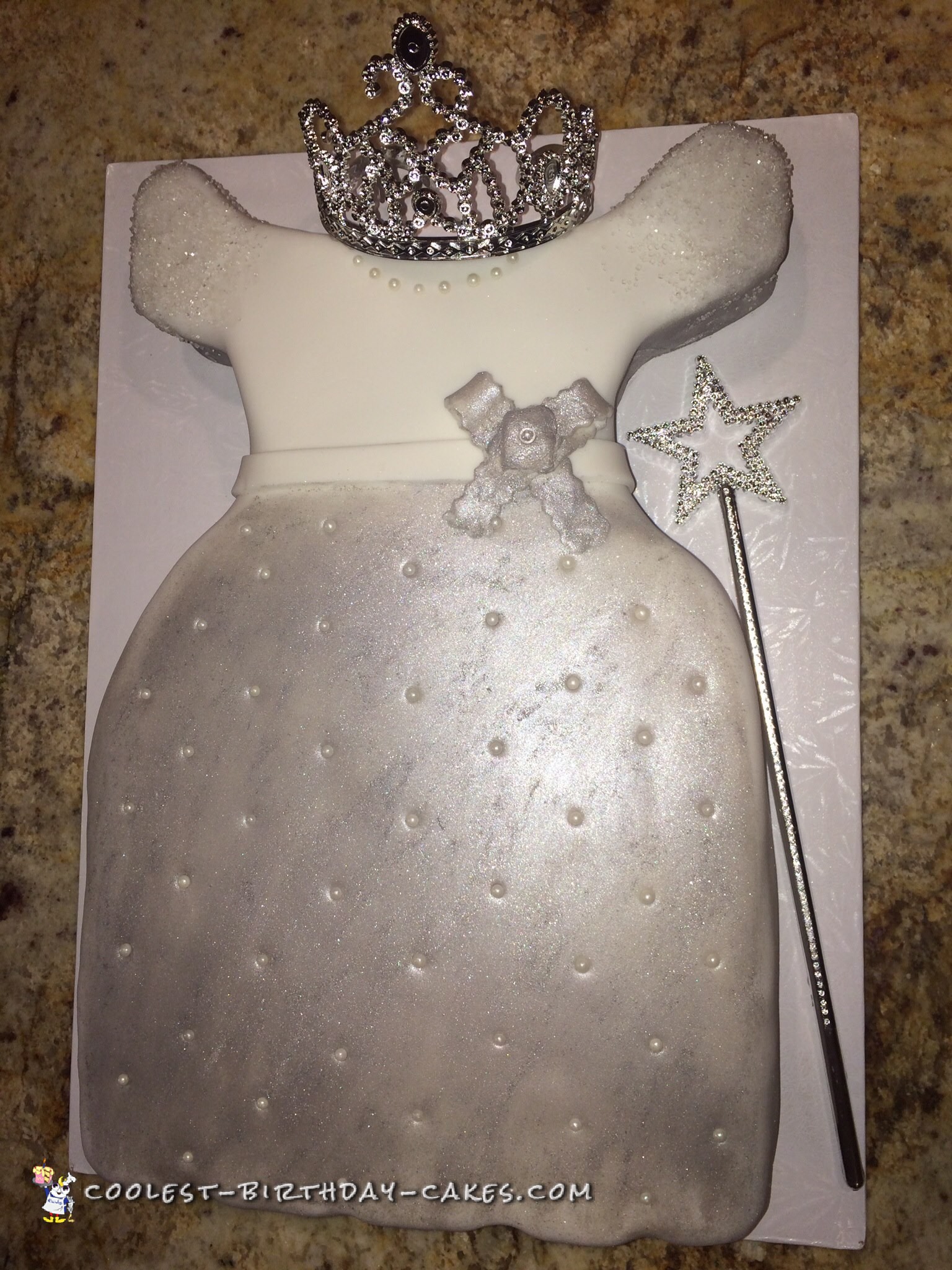 Hi my name is Maria! This Princess Dress Cake was my first fondant cake ever! I have to say I am now addicted to working with fondant! It’s like an artist’s canvas and it opens up the doors to so much creativity!

Well this Princess Dress Cake was for a wedding shower for SIL’s soon to be DIL. Her DIL loves Disney Princesses, so the shower was a Princess Theme. The cake itself was a 1/4 sheet pound cake, double layered with a chocolate buttercream filling.

I sketched a picture of the dress onto wax paper the night before, so I then placed my wax paper stencil over the entire cake and used a large knife to cut the cake along my stencil markings. The stencil helped tremendously! Then once I had my cake trimmed to my satisfaction in the shape of the dress, I crumb coated the entire cake.

Then I rolled out about 2 containers of the Wilton’s White Fondant. This was the part that I was most nervous about, since I had never worked with fondant before. I had studied a YouTube video about it, lol. So I had one little imperfection under the left arm pit of the dress but I was able to carefully perform some patch work.

Thank goodness for Silver Pearl Edible dust, that helped the patch work blend in! Oh the possibilities! I also successfully made my first fondant bow also painted with edible silver pearl dust. I extended the silver pearl dust onto the face of the dress from waist, down…which gave the cake a gorgeous shimmery glow.

I carefully and strategically placed white edible pearls along the face of the dress from waist down, almost giving the dress an embossed appearance. I used white sugar crystals on the sleeves of the dress to give them some dimension and POP. I had to lightly brush the fondant sleeves with some cold water first, so the sugar crystals would stick.

Lastly, I placed a princess tiara along the top of the dress and wand along the side, held with icing to help keep them in place. I used a 14″ x 19″ rectangular white cake drum. The cake got rave reviews at the wedding shower!

I also made a pumpkin carriage fondant cake for the wedding shower, which I am also posting on the site! If I could’ve done anything differently, I would have rolled out 3 instead 2 containers of fondant. Otherwise, I really enjoyed making this cake!