One of the Best Birthday Cakes 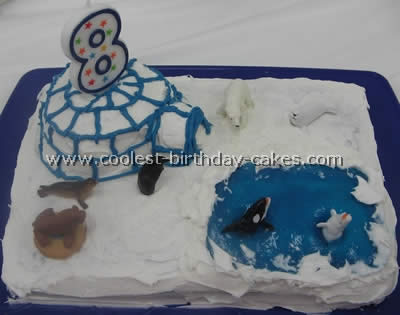 For this cake I used a chocolate box mix. I poured about three inches into a small (approximately 5-inch wide) greased baking bowl and the rest into a greased 9×13 cake pan and baked according to package directions. (I checked on the cake in the bowl earlier and tested with a tooth pick).

Then I made a batch of blue Jell-O Jigglers according to directions and poured some of the mix into a small square plastic container sprayed with cooking spray (I used the remaining Jell-O to actually make snowmen Jigglers). After the cakes cooled I inverted the rectangular cake onto a serving tray, trimmed any “bumps” and iced it with vanilla whipped icing (store bought).

Next I removed the cake from the baking bowl and placed it on the top corner of the iced cake. I placed three vanilla wafers in front of the “mound” and iced the “mound” and the wafers to create an igloo. I then piped blue icing on the igloo to resemble ice blocks. In the opposite corner Then I placed the firm blue Jell-O and used the vanilla whipped icing around it to help hold it in place.

I purchased various arctic animals from the local craft store and placed them around the igloo and in the water. To create a rock for the walrus to sit on I used another vanilla wafer with icing on it. I sprinkled the entire cake with edible white/sparkly glitter.

It was one of the best birthday cakes I have made!