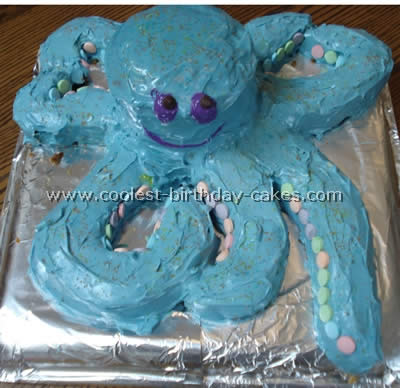 I couldn’t find a round sports pan to use for the head so I bought a 5″ half-sphere pan and baked one half of the head then did that another time for the other half and glued them together with frosting. It didn’t come our perfectly round but worked out alright., I just used an ordinary birthday cake recipe.

For the legs I baked two cakes in two 8×12″ baking pans. I then just cut legs out that would fit on the tray around the head and glued it all together with frosting. The tentacles are sweet tarts. It turned out a lot better than I expected, didn’t take long and definitely could be made to look a little cleaner with some more time.

I used a traditional birthday cake recipe for this layer cake and a batch of cupcakes. I also baked a full custard cup to create the head of the Octopus (it sort of overflowed into a nice rounded top).

“Ocean” – I frosted the cake as usual with white frosting (the best part is that you don’t have to be too neat – it’s just a rough “sea”). Next I used blue food coloring spray; the color was uneven which created a nice ocean look. (Be sure to cover your work surface because it can stain!)

“Octopus” – I frosted the custard cupcake in pink (which had red sugar crystals mixed in for color/texture) and perched it on the layer cake anchoring with a few tooth picks. The eyes are M&Ms and the mouth are sprinkles lined up. The tricky part is the sliced strawberry legs. Add these just before serving or keep cake well-chilled. Otherwise the strawberries will slide off the cake (maybe I needed stiffer frosting too).

“Starfish cupcakes” – I made a starfish stencil (saving the cutout starfish center). Frosted in white I held the stencil over the cupcakes and shook colored sprinkles over it. (This made the starfish.) Next to keep the sprinkles clear I covered them with the starfish cutout and sprayed the blue food coloring. (Without this step the sprinkles also turned bluish and were no longer easy to see.)

I used this birthday cake recipe for my friend’s son’s first birthday. He carries a stuffed orange octopus and she asked me to come up with an idea for an octopus cake. Here it is, and it really was simple to make!

For this Octopus birthday cake recipe, I used the Wilton round 3D sports ball pan. I used white cake mix, but decreased my oil to 1 tablespoon instead of what it calls for on the box because it makes the cake a little more firm. I used butter cream icing to “glue” the halves together, and then frosted over the entire thing with my star tip and orange butter cream icing. Then I took 8 strawberry shortcake rolls (little Debbie) and positioned them around the ball head for the legs. I continued the orange butter cream with the star tip and then added a little pointed ending on each leg with more built-up icing.

For the eyes, I used plain white butter cream, and smoothed it over with my wet pinky finger. I added a dot of black for the pupils.

For the mouth, I smoothed over a bit of the orange and made a red candy tongue from candy melts. I did that by melting the candy and pouring a tongue shape onto tin foil, and peeling it off when it was hardened. My butter cream icing recipe is as follows:

I saw this cake online and loved it and decided to try it myself. It was my first attempt at a fondant cake, and thought it looked fairly easy.

First I baked a round cake with two layers. Then I frosted the cake with a thin layer of buttercream. Next, the fun begins with the fondant. It is very similar to play-do.

I dyed the fondant various colors that I needed. First I covered the entire cake in a layer of white fondant. Then I added the blue fondant around the cake as the “water.” Then I formed little green pieces as the seaweed, and allowed some of it to separate from the cake to give it a 3-D effect. Then I just formed various sea creatures and attached them to the cake with a little bit of water.

My kids love sea life, so this cake was a hit for them!