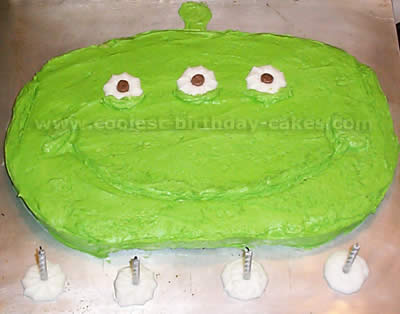 My stepson was a huge Toy Story fan from day one. He has had at least 3 Toy Story birthdays that we have thrown for him.

This cake was a thrown together cake after the one I was making for my stepson’s birthday sort of melted into goo (the night before I had prepared a dome shaped alien planet that we put a Buzz topper on.

When we opened up the oven where it was hiding, and yes the oven was cool before we hid the cake in there, the planet looked like it had exploded and melted all over the cake plate. That wasn’t going to work. I couldn’t give that to him for his birthday cake.

We had less than an hour until birthday time so I quickly took store box mix and made two round cakes. I cut a crescent out of one so that the other cake would fit into it and look like and oval cake. Covered it with green butter cream frosting. Used some store bought white to pipe on the eyes and used tootsie rolls to make the pupils.

I used the handle of a wooden spoon to draw in the mouth and just piped on the corners of the mouth, under the eyes, and the top of the Little Green Man. The kids thought it was cool and the other adults couldn’t believe that I had just thrown this together in less than an hour. I have since learned to always keep a couple of boxes of cake mix in the pantry and plenty of powdered sugar and butter around as well.