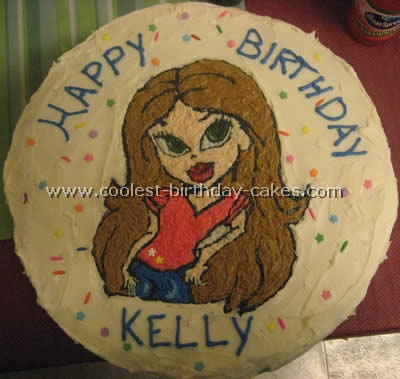 I used two 10″ rounds of just boxed yellow cake. Since my daughter likes the cream cheese icing, that is what I used for this cake. I was able to find a Bratz picture online which is a basic black and white picture. I found a website for Bratz dolls where I used it as a guideline to find the right colors. I made the black icing and used it to outline the girl using a #3 tip.

The eyes and lips are the most important things to make the Bratz look right so I had to try it a few times before I got it. What I ended up doing was blowing up the picture to an 8×10 and cutting out the eyes and lips and using them as a stencil to get the shapes right.

The coloring I used the Wilton standard colors and mixed them to get the colors I wanted especially for the hair (brown) and eyes (willow green) lips/shirt (red red). The skin I used creamy peach and brown (very little) to get the right skin color. I used a little royal blue mixed with the white to get a good color for the jeans and for the highlights on them I used a bamboo stick and a dab of white.

One “trick” I found that helped me because there are very small areas is using a bamboo stick and dipping it into the specified color for the design. It takes longer and you have to let each section set by letting cool in the fridge but it gives the best results.

Then I also used the cake candies for decoration on the shirt and the background. I also used the colored sugar sprinkles on the eyes and shirt and lips to give it a little sparkle effect which turned out really nice because the glitter would have been too much.

I wanted to make a doll cake for my granddaughter’s seventh birthday. She gave me a Bratz picture and asked me to make the cake looking like Bratz. I baked the top part of the skirt in a Pampered Chef batter bowl and the bottom half in a casserole dish. Then I leveled the tops and put them together with buttercream icing. I wrapped the doll in foil to keep from getting cake and frost into her joints.

I used homemade buttercream to frost the cake and made the lace for the front of the dress and the ruffles around the bottom. I sprayed it with Wilton’s food coloring spray in lavender. I used some Wilton’s fondant that I had left over from my youngest daughter’s wedding cake a few weeks earlier to make the overskirt bodice and wrap. I cut out flowers from the scraps and sprayed them also.

It took about three hours to create the cake – not including baking time.

We wanted to have a luau birthday party but my daughter was set on a Bratz cake so I turned a coloring page of a Bratz picture to a Bratz hula dancer. I used 1/3 sheet cake pan so that I could make sure I had plenty of room for the facial details. My color inspiration came from the gift bags we had bought. My daughter was thrilled with the way the cake came out.

I copied this cake from a Bratz picture. I made a chocolate sponge (double mix) and iced with Vienna cream. I piped the Cloe Bratz doll on in Wilton icing gels and sprinkled raspberry jelly crystals over the icing before it set to make it pink. This cake measured approx 8″ x 12 ” and served 30 people.

I used a chocolate cake mix and prepared according to the package directions. After the cake cooled I froze it then frosted it with Betty Crocker white icing and put it back in the freezer. I found a Bratz picture that my friend’s daughter would like. I taped the picture to the bottom of a lucite (clear plastic) clip board and taped plastic wrap over the top of the clip board. I outlined the entire picture with Wilton black tube icing.

After the outlining was finished I put it in the freezer for about 15 minutes for it to get hard. I then filled in the details such as the lips eyes etc. Put back in the freezer for another 15 minutes to harden. I then filled in all of the hair, clothing and skin colors. I used Wilton colored tube icing blue for pants, pink for the flower, lips and vest, orange (mixed with white) for the skin, black for the boots, Betty Crocker chocolate frosting for the hair and eyes and Betty Crocker white frosting for the shirt, head band and whites of eyes.

I then placed the clip board back in the freezer for about 30 minutes. Finally I covered the entire Bratz decoration with white frosting extending about 1 inch over the outlines making the icing all about the same depth and put in freezer for an hour. I took the cake and decoration out of the freezer, took the plastic wrap (which will be heavy) off of the clip board and “flipped” the Bratz girl onto the cake, peeling the plastic wrap away from the decoration.

This cake was the image of the Bratz picture that I copied and was admired by all!

Cake by Danielle B., Vancouver, BC

This cake was a trial cake I made in preparation for my niece’s birthday. I wanted to see how it might turn out. I made a regular boxed chocolate cake and then iced it with Wilton’s chocolate butter cream icing. I then found a Bratz picture on the internet which I enlarged and then traced onto wax paper with piping gel. I transferred the outline to the frosted cake and used Wilton buttercream icing tinted in the appropriate colures for the character. I used the rose petal tip to get the texture for the hair.

This is my very first cake after taking Wilton Decorating Class – Course 1. This particular cake used three boxes of cake mix. After using buttercream frosting (homemade with Wilton recipe) I traced a Bratz picture onto wax paper. I used a toothpick to draw this picture.

I star tipped the whole Bratz using differed tinted colors. But I used red Wilton gel for her lips and stars. Finally finished it off with a border tip and I added the name last. I have learned that if you go simple…you can’t go wrong!

I have never made a cake before. My daughter really wanted a Bratz cake for her sixth birthday this year and we had a heck of a time finding a premade one at the store. That’s when she suggested that I do it for her…how hard can it be right? (Apparently I had no idea!)

Anyway I used two boxes of Betty Crocker strawberry cake mix and made two rectangular cakes. Then I trimmed them down to the same size so I could stack them. The center of the cakes is a strawberry glaze.

We went to the party store and picked up a bunch of decorations a Bratz picture and cake tips and away we went. The Bratz on the sides of the cake are actually the cards off the party horns and I just pinned them up using frosting behind them. It’s not perfect and this defiantly was a learning experience for me. I just wanted to post our pictures to give some people who have never made a cake before some inspiration!

A Bratz gal is not easy to draw so I cut the outline from a Bratz picture on paper and traced it. For any other areas that were difficult to get the proportions correct I just cut the original outline of paper out more and traced it again. I filled it in with royal icing. A very simple cake but a bit time consuming.

This was a cake for a friend’s daughter. I’ve done a cake for every one of her birthdays. This year was Bratz which I copied from a Bratz picture.

I did a double layer marble cake with a purse on it. There were Bratz dolls displayed next to it but they weren’t pictured. The purse was a 6 inch round cake with the bottom cut off. I used lolly pop sticks to anchor the purse to the cake. I frosted the purse then used cornstarch on my finger to smooth it out in places.

I made a handle out of laffy taffy bit it was too soft and kept falling. I bought some ready made colored fondant but it was too dried out to use it. (I was very disappointed with this). But the little girl didn’t even notice she loved her cake; and that is all that matters in the end.

A large basin was used to create the chair which I copied from a Bratz picture.

I chopped down the back and cut out a chair shape. Cover in cream icing and jam. Cover over with roll icing.

Let it set for an hour then use butter icing spread very thinly over the fondant.

Add craft sugar to coconut and sprinkle over the fondant. This gives a fluffy effect, great for little girls…or football pitches.

This website helped me create this awesome Bratz Cake for my daughter’s 5th birthday. I was convinced that it would turn out to be a disaster but by following the Gel Transfer method (using black gel trace a picture onto wax paper and then place the traced bratz picture on your cake press gently and, voila, it makes a “stamp” of the image) and then filling in the image with ‘Cake Mate’ pre-tubed frosting using a star tip – it turned out fabulous and was the hit of the party!

I surprised myself and most of my entire doubting husband! My daughter loved it and thought it was the coolest cake ever!