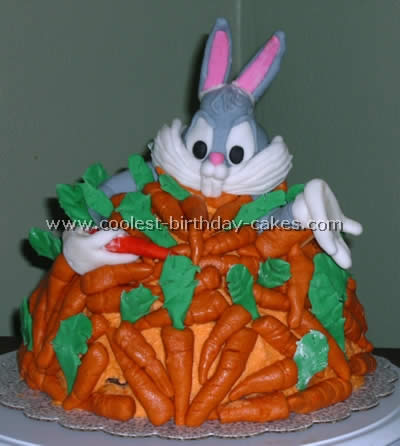 I made this Bugs Bunny cake for a co-worker on her last day. The carrot mound was one cake mix made in the Barbie princess pan. The carrots I made out of the buckeye recipe which is 3 lbs. of 10X sugar, 2 lbs. of peanut butter and 1 lb. of softened butter. I used a little more than a third of this recipe to make the carrots. To make the carrots roll into little logs and taper the one end. To get the lines on the carrots I rolled them over toothpicks. You can place them on the cake as you go or at the end.

I made the leaves out of fondant by making little logs and flattening into teardrop shapes and used a toothpick to cut random slots in them. To make Bugs I used fondant tinted gray. For the head make a ball and pinch from the center upward to make a flat like cone shape with the top quite high. Push down at the nose area to make a dip and pinch down a little at the chin. Take white fondant and make little logs to go on both sides of the face. I did one layer of four logs on each side and then took one larger piece shaped as a teardrop and flattened it and placed it on top of each side of logs. Blend it in a little. Take a knife and draw lines on to make it look more like fur.

For the ears take gray fondant and shape into logs that are tapered at both ends. Press in the center with your finger to make an indent. Take pink tinted fondant and do the same but a little small and place on the ears. Place them on the head using a little frosting as glue. You may want to use half a toothpick for extra support. To make the body take gray fondant and make into a log tapered at both ends smooth and position how you want the arms. Pinch upwards slightly in the middle of the log to make the neck. Take a little white fondant and make a flattened teardrop and place in the middle of the log over the pinched area for his white neck/body fur. Take a small round ball of white fondant and flatten and place over the ends of the arms for the white on his cuff.

For the hands make a teardrop out of white fondant and flatten it slightly. Use a knife and cut a slot for two fingers and the thumb shape the fingers and then using your thumb make a indent in the palm. Secure the hands onto the cuff with frosting and I also used a toothpick. I took a modeling stick and put in the bottom of the head through the middle of the body and onto the cake. I then randomly placed the leaves. I then just made a small sign and placed in his one hand saying “That’s all folks”. Also if you want Bugs to hold a carrot place one in his hand and wrap his fingers around it. This Bugs Bunny cake might sound complicated to make but it was quite easy and worth the try!