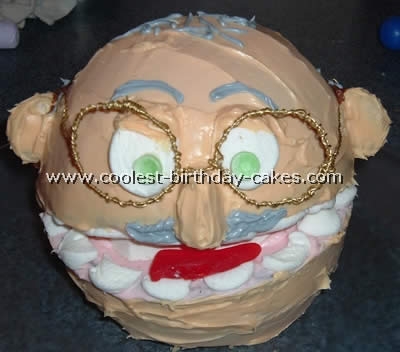 This cake actually looks like GranFreddie my friend’s father. He was definitely surprised to see himself in a cake. I was asked to make him a cake so was looking for different cake decoration ideas, when I came up with this idea. I used a Wilton Ball pan to make the head. I froze it to have a more workable cake. The cake was Pillsbury, not my favorite but was his.

The icing was also Pillsbury, colored with Wilton coloring. I used a wedge from a pack of taco shells to keep his mouth open. The teeth are made of big marshmallows cut in half (length and width). The eyes were also marshmallows cut widthwise in thirds so to not be too thick.

I iced over the top of the eyes to give depth and look like eyelids. His nose and ears were shaped using orange slice candies that I covered with icing. The green of his eyes was done with big sweet tarts. The nose, eyes and ears were anchored into the cake using toothpicks. His glasses were made by a friend from some copper wire.

Lastly his tongue was actually a red gummy fish. I didn’t smooth the icing cause what old person doesn’t have wrinkles? The hair was done with a size two tip, just squiggled on respectively.

This cake was a gag cake I made. I used the sports ball pan. I made a chocolate cake and cut it into 4 layers and filled it with whip cream. I then frosted it with whip cream as well. I had a hard time trying to get it smooth that is why you see lines on it.

For the eyebrows and beard I used whip cream and then with a toothpick I just pulled the icing to make it look like hair. The person I made it for just loved it. He didn’t want to cut it and he wanted to bring it to work the next day to show off.