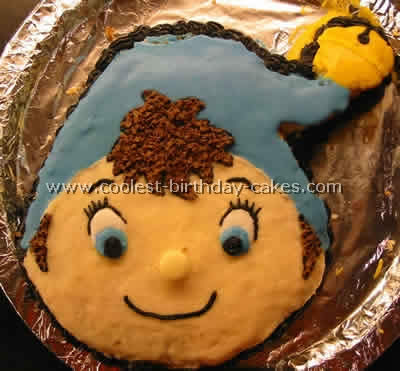 We had a rectangular sponge cake which I made from one of my cake mix recipes and cut out the shape of Noddy’s face and hat. I iced it with butter icing. Used milk chocolate buttons for the nose, chocolate bits for the hair and piped the rest of the detail on with icing sugar.

I made this Noddy cake for my son’s second birthday. I used a Noddy figurine lamp as the figure and placed it in a cake car. The car shape was made of bits of a square cake which I made from one of my many cake mix recipes. I made the wheels a day or two before the party. They were made using a stack of biscuits which were stuck together using icing then covered in plastic icing.

The headlamps are chocolate balls. The radiator cap is a cool drink lid covered in foil and the radiator is toothpick covered in foil. I made a windscreen out of wire and covered it with foil. Unfortunately I ran out of shop bought plastic icing (we live on a farm and far from shops) so couldn’t do the yellow part of the car so that is done in butter icing.

I don’t know how long the cake took me to make but as I was heavily pregnant at the time the next day I was lame. It was worth it though as I carried the cake out and my son skipped beside me shouting “wow!”

I made Nods for my son’s second birthday. I baked an 8″ Victoria sponge from one of my cake mix recipes and covered it with pink sugar paste. With blue sugar paste I made the hat by gently laying it over the top of his face and letting it fold at an angle. I made his bell with white icing and painted it with gold colored luster. His hair, face, scarf and ears were all made with colored sugar paste and just stuck into position with a little water. It was very easy to make and got a lot of praise!

Cake by Julie M., Indianapolis, IN

My neighbor helped me with this cake which I made from cake mix recipes on the box of the ready made cakes. I found a coloring page on the PBS kids website and was able to cut it out place it on top of the cake and trace around it with at toothpick. After this I filled it the parts of his hat face and bow tie with a star tip.

I made the eyes out of icing as well but put it on with a knife. The nose is just a lump of icing rounded up and the hair is made from a leaf tip over all the star tip icing on the hat and face. It really didn’t take long at all and it turned out great I think! Molly loved it!

Both of my daughters are lactose intolerant and I have had to learn how to make cake mix recipes that would suit them.

Here’s the tale…. My youngest daughter requested a Noddy cake. I was unable to find any ideas from anywhere (even the internet let me down) so this design is unique and to say the least I am extremely proud of it. It took approx. 4 hours to decorate.

It is a basic 2-layered sponge with fondant icing. I prepared the coloured icing first and drew a rough design on paper, then I just rolled out the icing and added the face remembering to make the lump for the nose first. I then added the shape of the face, then the hair, then the hat, then the eyes (which are very hard to do freehand), then the lips and so on.

I finished with Jennifer’s name edged the board and hey presto.

I believe it was worth the effort. Happy decorating.