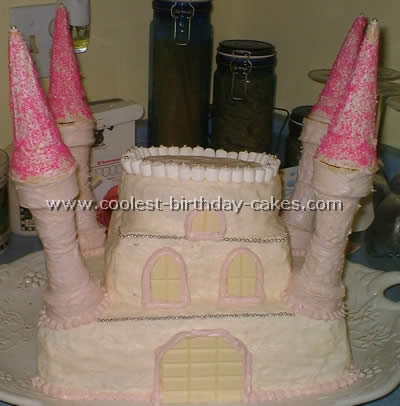 I made this castle birthday cake for my seven year old’s princess party. I used one of the castle cake recipes that I found on this site and made four cakes of varying sizes. I frosted the bottom layer then added the middle tier which I had already frosted on a round cardboard piece. I then frosted the top tier and placed that on the middle tier. I did the writing and then added the edging. I then added frosting to some princess candy pieces and placed them on the cake.

I added frosting fairy dust to the wand and added clouds to the bottom of the castles (for extra sticking power). All of the girls were oohing and ahhing at the cake.

I made this castle birthday cake from a 10″ round Madeira then an 8″ round Madeira on top. I used baked bean tins for the towers and marshmallow filled cones for the spires. I tinted white chocolate pink and covered the cones with that. It’s iced with masses of pink buttercream and lots of sweets! The windows are rings pushed through heart shaped sweets and the trees are sweet cable in marshmallows!

My princess loved it. She was over the moon with it!

This castle birthday cake was quite easy to make. The base is a Winston Flower Cake pan with a small square cake on top. The turrets are inverted sugar cones with skinny candles on top as the flag poles. The middle raised turret is a wafer cone (filled with frosting to make stable) with an inverted sugar cone on top. I found the sugar sea creatures at the supermarket and the Ariel figure in the half shell on eBay. The water was enhanced with sparkly edible glitter and the seaweed was easy to pipe with a leaf attachment.

My daughter loved this cake for her fourth birthday. Hope you enjoy it too!

The castle birthday cake I made was done using two rectangular cakes iced together for the base and two round 8inch cakes for the tower. The rest is easy, just copy.

I also used three tubs of Betty Crocker vanilla icing, colored pink., And a few cupcakes and ice cream cones for the turrets., Jelly beans and pretzel sticks and colored shredded coconut for the moat and gate.

It took roughly an hour to decorate.

I was inspired by the enchanted castle birthday cake out of the Betty Crocker Cookbook for Boys and Girls. My mom made it for me and I was determined to create something similar for Luke’s seventh birthday.

The cake is two 9×9 layers stacked plus one additional 9×9 cut into thirds for the sides all held together by pennants attached to long bamboo skewers. The towers are sugar cones painted with melted chocolate (Luke’s big sister and little brother helped with this part of the project). The moat is blue frosting with Butterfinger Bites as rocks. A white chocolate drawbridge and mini marshmallow ramparts finished it off.

It took about three hours from start to finish and the look on his face when he saw the finished product was worth it!

I made two 9″ round cakes and topped them with two 8″ round cakes with icing in between all layers for this castle birthday cake. I coated them in purple icing. I covered paper towel rolls in fondant icing and spray painted them purple with spray food color for the marble effect.

I did the same with smaller rolls for the top. I placed the smaller rolls by pushing them into the cake slightly then cut out corners for the taller corner rolls to sit in and “glued” them in with icing. I topped the columns with sugar cones and put icing on for the shingle effect. Then I cut doors out of Graham crackers and lined them with icing. Lastly I piped on vines and flowers up the sides of the castle.

I saw several cakes online and decided to try this castle birthday cake for a friend’s birthday party. I basically borrowed ideas from several others. I found some stickers with the princesses on them for the windows and just stuck them on the cake with some icing and bordered them with the windows. I added a tiara on top that I think topped it nicely.

I have been looking all over the net for the perfect castle birthday cake. I found one on this same website and just made some minor adjustments. So thank you for all the ideas. Here are the ingredients: three cake mixes, four tubs of frosting, two bags of pink melting chocolate, and two packages of ice cream cones – one sugar and one regular, package of princesses from Disney store, chocolate squares, edible glitter, pink sugar crystals and wooden skewers.

I made two 9×13 cakes (one strawberry and one Funafuti) a week in advance and put them in the freezer. I also made two 9″ round cakes (Funafuti) and froze them. The day before I melted the chocolate and dipped the ice cream cone. I inverted the sugar cone on top of the regular cone for the tower effect. Once dry I gave it a second coat. I then took the cakes out of the freezer and frosted them. I layered the two 9×13’s on top of each other and then I put one round cake on top of that. I cut wooden skewers and inserted them in to make sure nothing toppled over. In between the layers was vanilla frosting and the outside was vanilla.

I cut out the corners to fit the towers. I had four towers along the bottom, four on the second layer and one on top of the castle cake. I made miniature flags out of plain white paper with markers. I put the letter K on some for Kayla! The top one said “Happy Birthday Princess Kayla”. I attached those signs onto cut skewers and stuck them in the ice cream cones. I used chocolate squares for windows and the front door. I sprinkled the whole castle with pink sugar crystals. Everyone loved it and couldn’t believe I made it. It took about three hours to make this castle birthday cake.

My daughter wanted a Belle party for her fifth birthday. I decided to use the new Wiltons castle cake set for this castle birthday cake. It took days and hours to finish but after it was done it was worth it. My daughter really loved her cake.

The bottom is a 10″ round and the top is a 6″ round and was iced with butter cream icing. I made fondant daisy flowers and all the trimming was made with buttercream icing. I needed more cake so I also made another 6″ round cake and used what I had left over. This was one cake I didn’t want to cut.

For my daughter’s second birthday she wanted a Disney Princess party. So I decided to take it upon myself to make her the ultimate princess castle birthday cake. I used two 8 x 8 square cake pans for the bottom layer of the castle. Then I used half of a round ball cake pan for the dome on top of the castle. I used cupcakes for the towers.

I used wooden skewers to secure the cupcakes in place so they would not topple over. For the tower tops I used waffle cone ice cream cones covered in icing and then topped with colorful sprinkles. I searched online for just the right size pictures of the princesses and carefully cut out two of each so that I could place a toothpick between the layers so that the princesses would stand on the cake. I wanted to make sure Ariel had her own “ocean” area of the cake being that she was in her mermaid form so I added pieces of cake and added the blue waves of the ocean and used brown sugar for the sand.

The castle birthday cake and the party turned out to be a huge success!

My daughter wanted a castle birthday cake for her third birthday with all the princesses! We used a Wilton’s cake pan, 11×14 and used three boxes of regular vanilla (not white) cake mix, baked according to pan instructions.

The frosting was Wilton’s buttercream which I’ve found is the closest to that yummy bakery frosting. I made about eight cups to cover cake. I used Wilton gel (rose) coloring for light pink frosting and (leaf green) for green. Towers are rice krispy treats made according to box instruction held together with toothpicks and frosting in between.

The princesses in the towers are princess “rings” party favors that I bought online and can be found at most party stores. Princess figurines were also bought online and are at most party stores. The castle birthday cake was a huge hit! The towers also have little ice cream cone shaped cotton candy cookies to look like the tops of the towers. I bought these at the drug store.

This castle birthday cake was created using a 12″ x 3″, a 10″x3″ and 8″x3″ round Wilton’s cake pans. Each was a single layer filled and iced covered in white fondant. Sculpted tops of each cake were created using fondant strips and a square cuter to make the points. The turrets were created using a mix of fondant and gum tex rolled and wrapped around a toilet paper roll that was covered in seran wrap. The turrets were left to harden for 24 hours and then removed from tube and left to dry standing up.

The roofs to the turrets were ice cream cones brushed with water and covered in a fondant and gum tex mixture and airbrushed and left to dry for 24 hours. they were later dusted with pearl dust. Small round sections were cut from each layer of the cake and the turrets were pushed in and attached with Royal icing. The roof to each turret was also attached with Royal icing. Detailed dots were piped onto the castle birthday cake with royal icing using the small ball tip. Large flower was purchased at Wal-Mart and pushed down through the back of the cakes.

Tink and the other fairy were also purchased at Wal-Mart in the toy department. Tink was attached to the flower with fishing line to appear as she was floating. The cake actually looks for labor intensive and difficult than it really is. Thanks for looking.