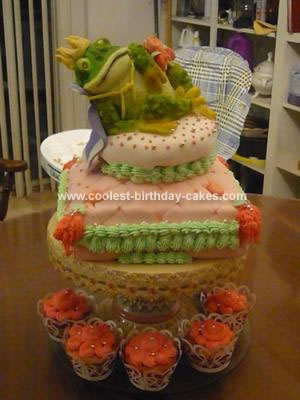 This Frog Prince Cake was done for my grand daughters 1st birthday. The first thing I did was go out on the internet and look for pictures of frogs. I found a picture of a frog figurine I liked and made the frog out of rice crispy treats (store bought). I just molded it into … Read more 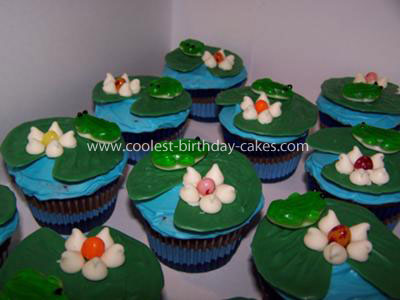 My daughter’s First Grade class was learning about frogs the last half of the year. I thought what a cute way to end the year with Lilly Pad and Frog Cupcakes. These are very simple as you can see! Prepare the cupcake using the directions on the box. I colored the frosting blue to look … Read more

I got the idea for this frog cake on this website. My daughter is crazy over frogs. She has two pet tree frogs, so we thought a frog cake would be good. In the past, I’ve made a cake like a pond with lily pads and frog candles, but I’d never tried to make a … Read more 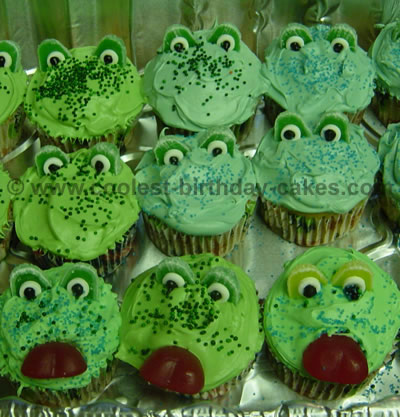 These are Frog cupcakes I made. I frosted them green and added green round sprinkles (“non-pareils”). For the “eyes”, I took a green gum drop, cut it in half. The white parts of the “eyes” are mini-life savers. For the center, I used black frosting in a can. For the mouth on some of the … Read more 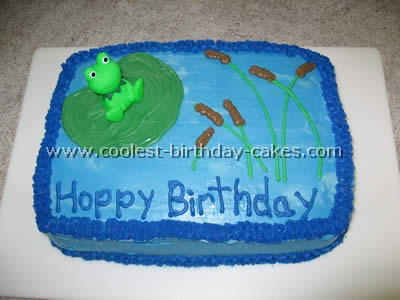 I made this frog cake from a basic 9 x 13 cake frosted in blue. I used a zig zag design on the edge. It was my first time and I think I decided that I prefer scallops. The lily pad is made from vanilla chocolate that I melted and colored green. I just spread … Read more 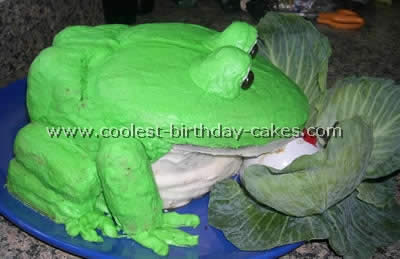 My grandson was having a birthday party at a wildlife center and his invitations and decorations had frogs on them. Ive been making cakes since my boys were little but never found a place to showcase them! I believe I found the inspiration for this cake from this site for frog birthday cakes so I … Read more 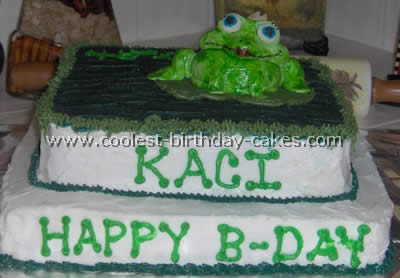 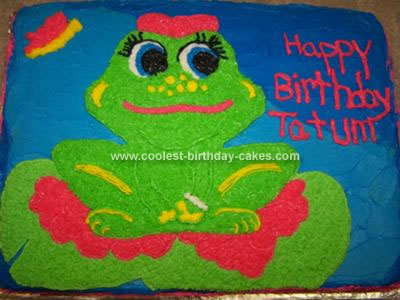 Well it’s official…I have become a Cake Lady for my little town I live in. Happy to have people refer me to make cakes for them. I got a call asking me to make a cake with a girl frog. A lady’s daughter wanted her birthday theme to be pink and girl frogs. I didn’t … Read more 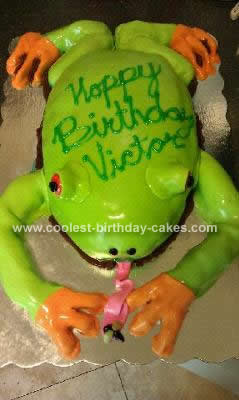 This Tree Frog Fondant Cake was created as a fun joke for a friend that cannot stand frogs…heh heh. So it has a two layer red velvet body, with a chocolate buttercream filling and frosting, and covered in Duff’s Buttercream Fondant, tinted green with gel. The legs are made from gluten free cake, baked in … Read more 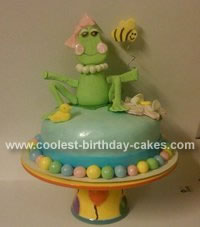 I looked everywhere for a homemade “girly” frog birthday cake and couldn’t find any examples of what I wanted, so I decided to make one. It turned out almost as I had pictured it. It was for a little girls 4th birthday and she loved it! This is a two layer cake filled with buttercream … Read more 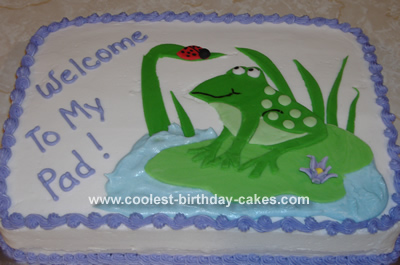 I was asked to make a house warming cake by a co-worker. After giving it some thought, I came up with the frog cake idea. I baked a 9×13 chocolate cake and iced it with homemade buttercream icing. I found a frog picture online and used it as a pattern. I rolled out fondant that … Read more 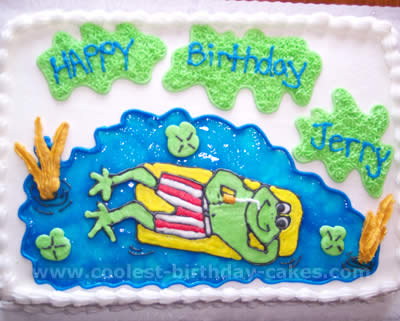 This frog cake was for a man who loves his garden pond! I found a frog picture on the internet and transformed it onto the cake by tracing it onto wax paper using piping gel, then turning it over onto the cake and tracing that with buttercream icing. I made the pond by using piping … Read more