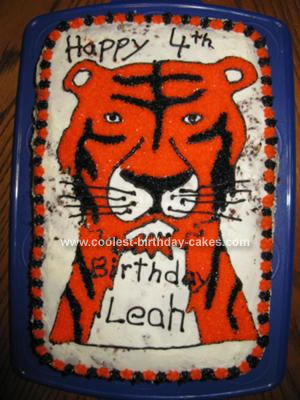 My daughter wanted a tiger birthday cake for her 4th birthday. So what I did was find a picture that I liked and that was easy enough for me to decorate. I found two coloring pictures and combined them together to get the tiger that I liked. Made a butter cream icing recipe and colored … Read more 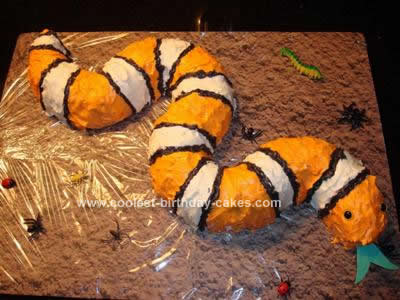 For my son’s 7th birthday, I tried a snake cake. I bought scrapbooking paper that looked like dirt, put it on a piece of cardboard, and covered it with plastic wrap. I baked two cakes in bundt pans, cut each in half and laid the four pieces in the shape of the snake. I made … Read more 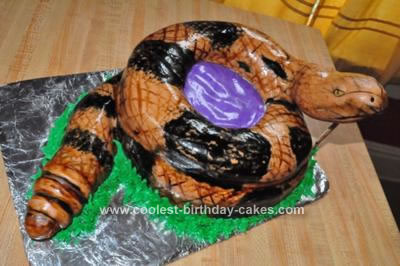 I made this Coiled Timber Rattlesnake birthday cake for my son’s 15th birthday. This is my very first fondant-covered cake. I am typically a cupcake baker – so I took this as a challenge to experiment and be creative! I started with two thick 10″ round layers of red velvet cake. I made the cake … Read more

This jungle cake was for my daughter’s second birthday The cakes are chocolate with chocolate butter cream. Then I used marshmallow fondant to cover each cake. The bottom layer is white. I used a pizza cutter to cut triangles out of black fondant. The top layer is yellow/brown fondant with dark brown spots. The animals … Read more 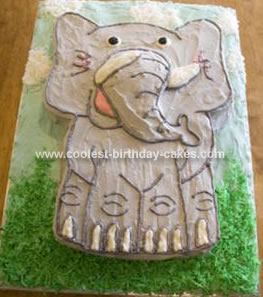 My husband and I made this elephant birthday cake for our daughter’s “Zoo Theme” 2nd birthday. The base was a piece of plywood that was covered with aluminum foil and then covered with a thin layer of rice krispie treats (as well as coconut clouds and coconut grass!) The elephant was made from three 9 … Read more 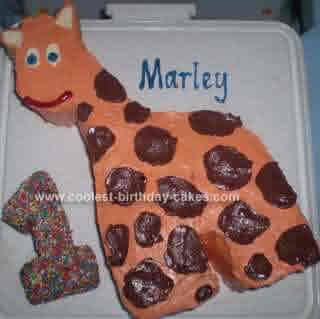 This Giraffe Birthday Cake was my first attempt at cake decorating, being for a special occasion, my first child’s, first birthday. He has a jungle themed nursery so I had to go with a giraffe cake. I got some great ideas from this website but ended up drawing my own design and cake template based … Read more 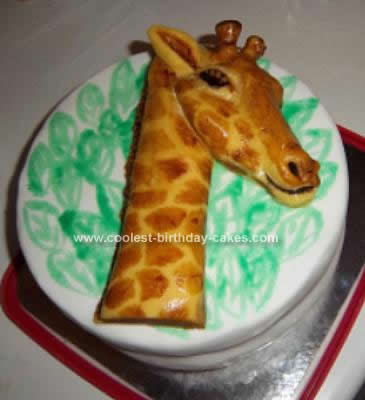 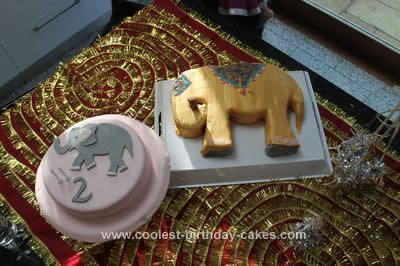 These two cakes were made for my daughter’s 2nd birthday which was Bollywood themed. The pink elephant cake was a solid chocolate biscuit cake and we dyed the icing and hand cut the elephant shape. The golden elephant cake was a strong Madeira sponge (to take the weight of the icing). It was iced with … Read more 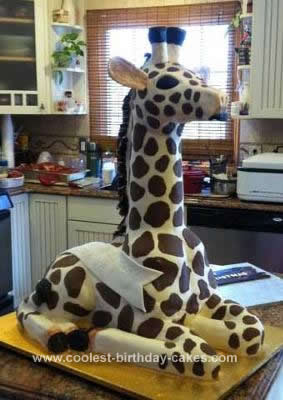 I made this Homemade Giraffe Birthday Cake for my sister-in-law’s 50th birthday party. The skeleton of the cake was a PVC pipe that I used to support the neck and head. The body is made of vanilla sponge cake with a Bavarian creme filling, with a vanilla buttercreme crumb coat and covered in an ivory … Read more 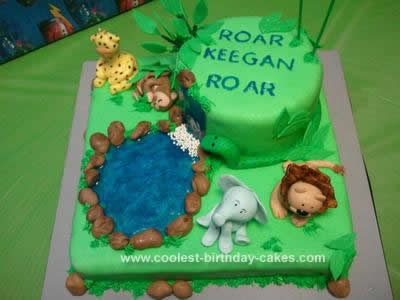 As my little boy’s 2nd birthday started approaching, my mind was spinning with a million and one ideas for his theme, and more importantly, his cake! He wasn’t a big fan of any one thing, but did have a love for animals. As my husband and I were on a budget, we figured this baby … Read more 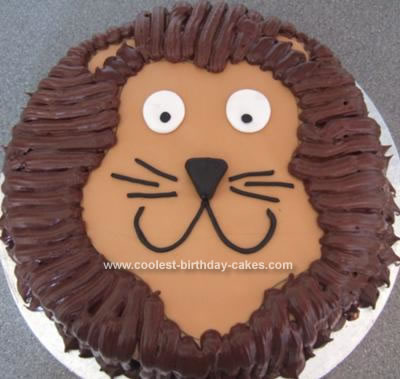 I made this Lion cake for my 10yr old, it’s very gooey and but really very easy to make, I used a 10inch sponge cake, filled and lightly covered with ready made fudge filling, also 2 tubs of ready made chocolate cream icing for the mane and 1 pack of regal ice in teddy bear … Read more 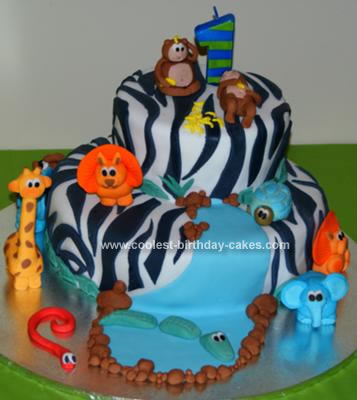 This Jungle Zebra Birthday Cake I made for my son’s 1st birthday. The top layer is chocolate and the bottom layer is vanilla. All the animals are made by hand from fondant. I covered the cakes in butter icing (for flavour and to help make the rolled fondant stick). I then covered them one at … Read more 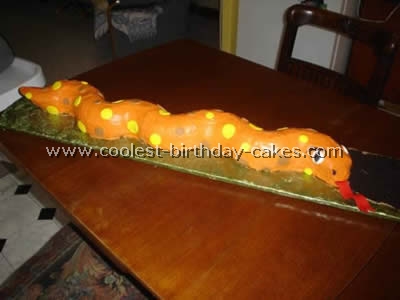 This birthday cake decorating idea was made by quartering bunt cakes and laying them in alternating patterns. The cake was covered with buttercream icing, and smoothed by using Viva’ paper towels, just lay the paper towel over the icing and rub softly in small circles. The warmth of your hand will mold the icing, and … Read more 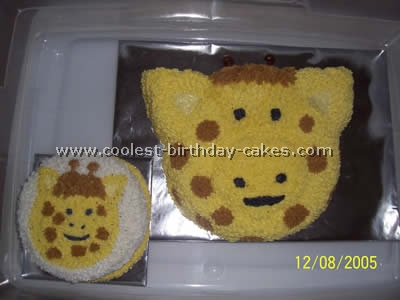 Once it was built up I starred over it just like the rest of the cake. I also changed the mouth a little from the mold. I used tootsie rolls for the “horns.” I rolled them with my hands and shaped them to look as they do. I jammed them into the top of the … Read more 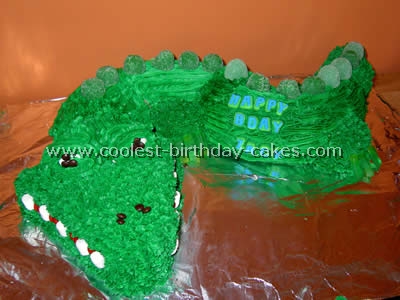 I started with a bundt pan. From scratch I made white cake. Then I made cupcakes also from the white cake mix. I made a 13×9 chocolate cake also. After all cakes and cupcakes cooled, I cut the bundt cake into three sections. I shaped the sections opposite directions like a snake.I used homemade buttercream … Read more 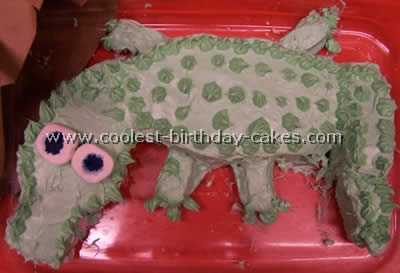 I baked the alligator cake in a 13 x 9 inch pan using a traditional white cake box mix, drew a sketch of the Crocodile and cut the cake into the pieces based off the sketch. I added green food coloring to cream cheese frosting and used marshmallows for the eyes and teeth. 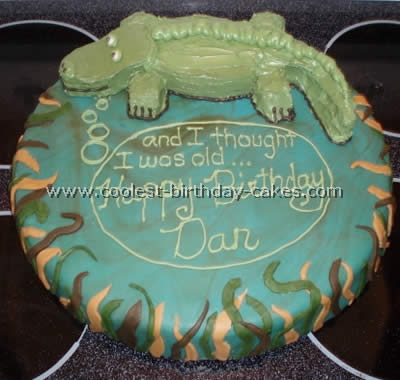 I looked all over for a crocodile cake pan and when I couldnt find one I broke down and carved it out of cake. The alligator was carved from a 9″ round yellow cake. I colored the cream cheese frosting, made his eyes out of fondant and piped on the rest. The swamp is a … Read more 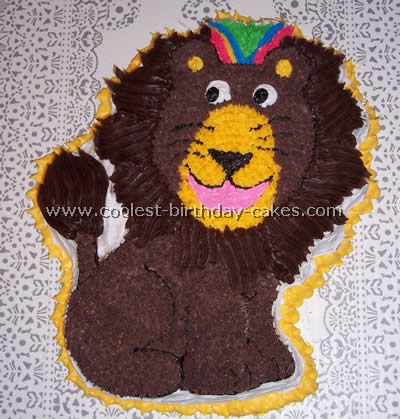 For my son Masons first birthday I wanted a Baby Einstein theme but I couldn’t find a cake I wanted. Of course there are no actual Baby Einstein character cake pans out there so I decided to get creative with the new Friendly Lion cake pan by Wilton. A trick I use for a very … Read more 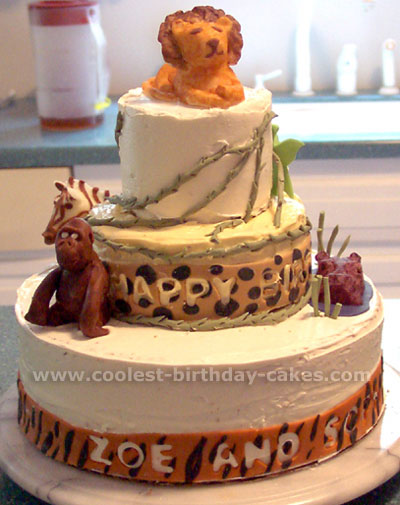 The animals of this jungle cake are made out of “Candy Clay”. Its just white chocolate and corn syrup. The borders are made out of fondant. I cut the letter out with letter cookie cutters. The top 2 tiers are chocolate cake and the bottom is a white cake. The frosting is butter cream. It … Read more