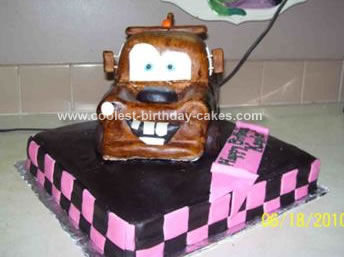 A friend wanted Tow Mater for her little girl, so I went with black and pink checkerboard for the bottom square. The homemade Tow Mater birthday cake was made using two cakes baked in bread pans. To keep it from looking so square I use marshmallow treats to sculpt curved edges, before I iced with … Read more 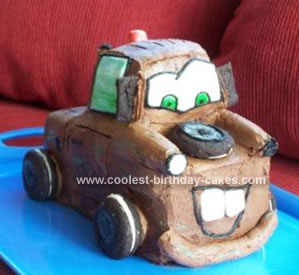 For my son’s second birthday, I decided to make a chocolate mocha Tow Mater cake. This cake not only looks great, but is SUPER tasty and it was easy to decorate! The icing is a chocolate mocha butter cream icing that is super easy to spread and very quick to make. 1/2 cup of shortening, … Read more 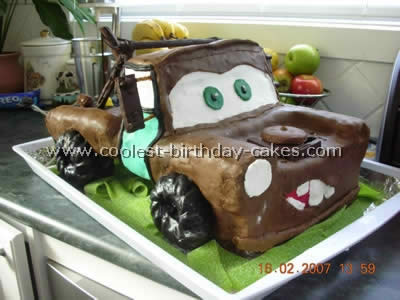 My 3 year old requested a Mater cake for his birthday. After doing some research through the pages here of what others have done, I managed to pull it off. My first cake flopped which worked in my favor as it created just the right dip for the bonnet and tray. The I made another … Read more 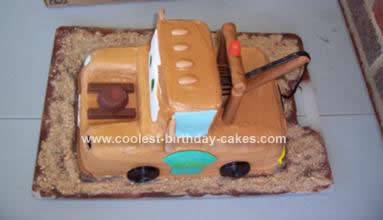 This Homemade Towmater Birthday Cake was my first attempt at a 3D cake. My youngest wanted a Tow Mater cake for his 2nd b-day. It took me a few days to finish. I used many ideas from photos to make this cake. A 9×13 cake pan was used and the body was white cream frosting … Read more 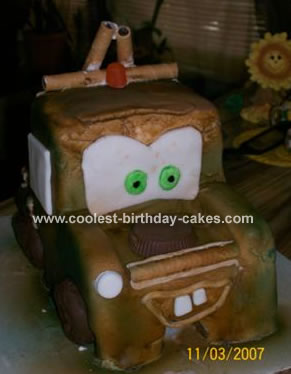 This Tow Mater cake was for my niece’s 4th birthday. She loved the movie Cars and told me that’s what she wanted. I made a chocolate cream cheese pound cake. I carved the cake and covered it in fondant, which was the first time I’d ever used fondant. It took a while to do cover … Read more 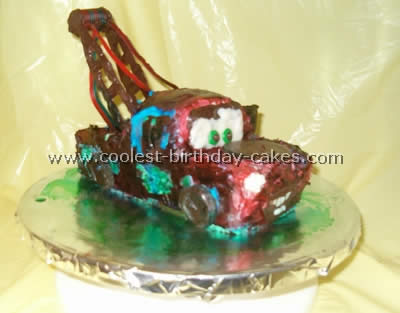 This Tow Mater (From the movie Cars) cake was a trial run for my friends son’s birthday in March and is made in a smaller scale than I will make it in March. The body of Tow Mater is made of a sponge cake which I sculptured into the shape based on a picture of … Read more 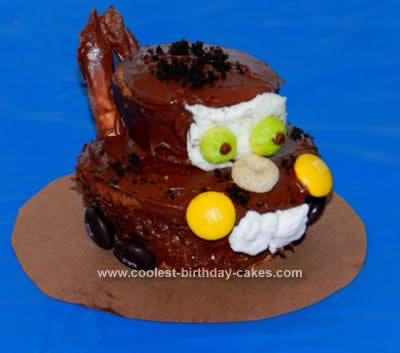 My son wanted a Cars and Mater tall tales party! I got the ideas for the Homemade Mater Birthday Cupcakes from this website and my own. I made two 8″ round cake, 1 chocolate 1 vanilla and strawberry filling then iced them with buttercream (from Wilton recipe) to decorate. I used white frosty around the … Read more 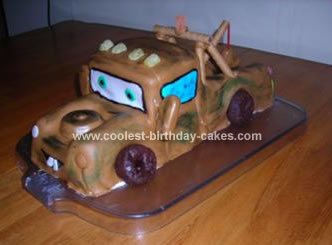 This Mater Birthday Cake was by request from my son who was turning 3. He wanted Mater and there’s no pan for that. I researched the web and found several ideas, including some from this great site. I used 2 loaf pans with 2 boxes of carrot cake (his favorite). One loaf was left whole … Read more 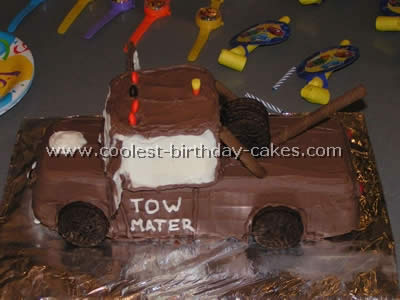 My son is a huge fan of the movie “Cars” so I made him a Cars cake. I made two pound cakes. I put one whole one down for the body and the other one I cut in half for the cab and the hood area. I just used chocolate frosting and a variety of … Read more 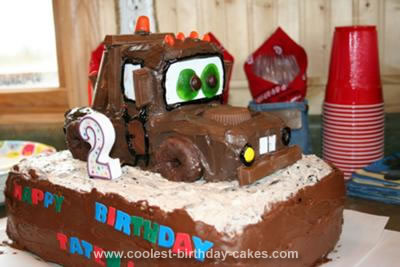 My grandson was turning 2 and my daughter asked me to make the cake so immediately I thought of Mater because he LOVES the movie Cars and Mater is his favorite character. I started by making two 9×13 cakes for the base, filled them with Oreo cream filling and also frosted the top with the … Read more 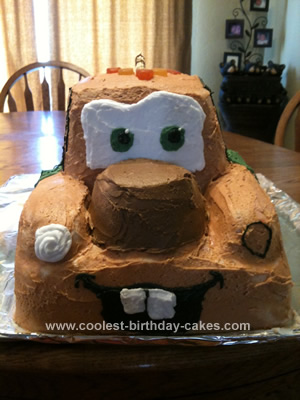 I started this Homemade Towmater Birthday Cake with a loaf pan and two 8×11 cakes. Also used a jelly roll pan so I could add height where I wanted and made 5 cupcakes for the wheels and one for the engine piece in the middle. Then built the basic shape looking at a 3D bath … Read more 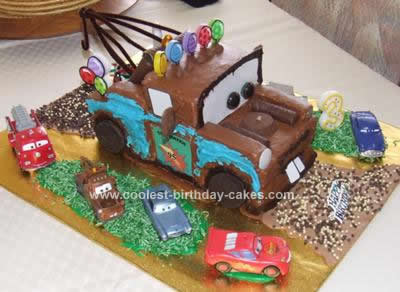 My son just had his 3rd birthday and is a huge “Cars” fan so I decided to make him a “Mater” cake. I started off with two sponge cakes 12”x8”. I used one for the base then the other I cut for the front bonnet and then for the back tray. I used royal icing, … Read more 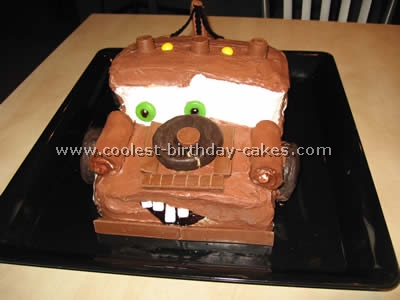 I used two cake mixes for this Cars cake, baked in regular 9×13 pan and a loaf pan (for cab). I cut rectangles out for the base and the bed of the truck. I added the loaf rectangle for cab (held together with bamboo skewers). Ice the whole cake except windows, with chocolate frosting. Ice … Read more 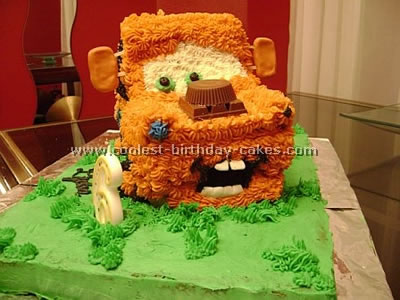 This was my first attempt to carve a Tow Mater cake from scratch without molds. I used some of the ideas from others on this page. I used a 12×18 sheet cake for the bottom (decorate and frost last). I used four 9×13 rectangle cakes stacked up and carved a tow truck shape from it. … Read more 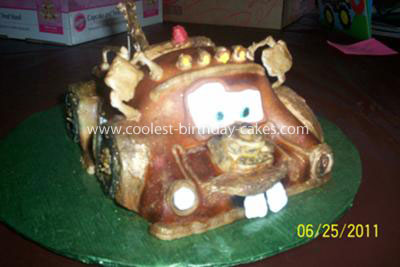 This 3D Tow Mater Cake was made from “scrap” pieces of cake, leftover from a wedding cake I recently made. I used fondant to cover cake (also leftover from the wedding cake), and royal icing for accessories. Air brushed the colors needed and brushed on accents w/dusting powders. The sheet cake was the 2nd cake … Read more 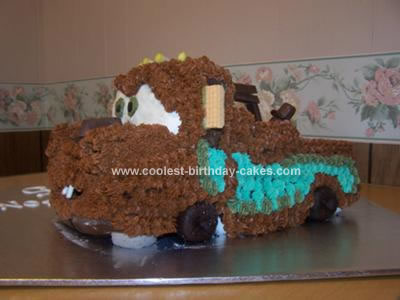 I got this idea for a Mater cake from another submission on your page but I put my own twist on it. I did not do any carving. I used 3 cake mixes which was made in 2 8×11 pans and 3 loaf pans. I positioned the cakes to form the tow-truck and used 1 … Read more 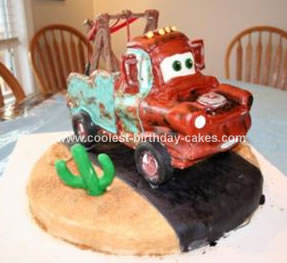 Well, three years in a row my son has requested a Cars cake. Mater was bound to make the list eventually. This was the year. I think I put more effort into this Tow Mater cake than any to date. It was the most challenging structurally I’ve done so far. The truck body was carved … Read more 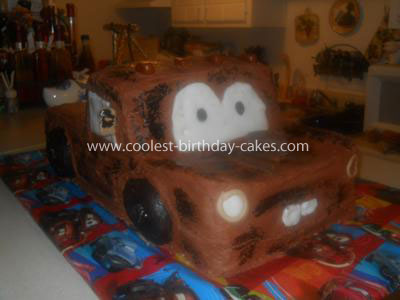 This Tow Mater Cake is frosted with butter cream because fondant and I do not get along! I used 2 half sheet cakes and cut off about 2 inches, lengthwise from each cake to make the cab. I did use homemade fondant for the windows, eyes and teeth. I used full size chocolate donuts for … Read more 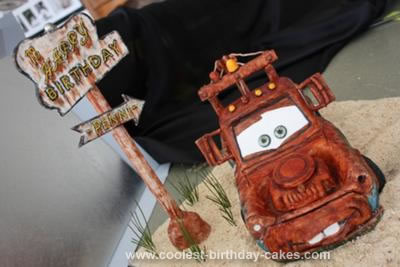 A friend’s Mum asked if I could please make her daughter a Mater birthday cake for her 18th birthday. This would be a huge undertaking on my part, as I like things to be done as authentic as possible, and his Rigging concerned me greatly! All I could say, was I would “try” to do … Read more 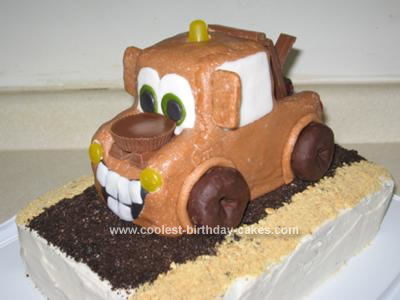 I made a Mater cake for our son Cameron’s fourth birthday. The base of the cake was two 9″ x 13″ cakes, layered with filling in between and frosted with buttercream. The sand was actually crushed graham crackers and the road was crushed Oreo cookies. Mater was carved from two frozen Sarah Lee pound cakes. … Read more 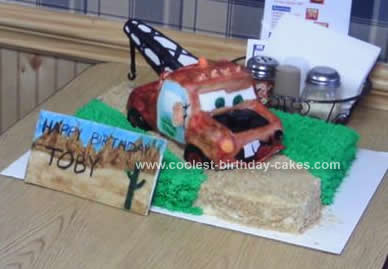 This Homemade Tow Mater Cake was for my boss’s nephew. This was my first attempt at carving. The cake was 4 box mixes. The first two were for the 11″x15″sheet pan, the other two were used for the two loaf cakes. I covered the sheet cake with a crumbcoat of buttercream, used crushed graham crackers … Read more 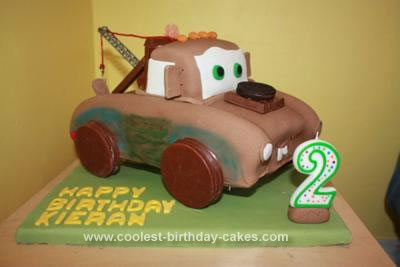 My two year old son loves Tow Mater from Disney Cars and he had requested a Tow Mater Birthday Cake. First, I thought this is the hardest cake ever to make! But to my surprise it was the enjoyable and full of surprises. So the flavor of the cake is chocolate with all the things … Read more 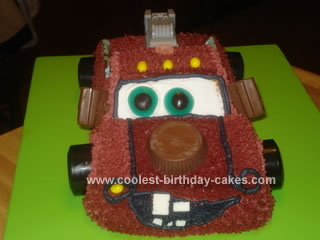 I started the Tow Mater birthday cake with a Wilton 3-D Cruiser cake pan and a 4×8 loaf pan. I used a pound cake recipe as the texture makes it easier to cut and trim. I cut the Cruiser cake just behind the front window and attached the loaf cake with a dowel rod from … Read more 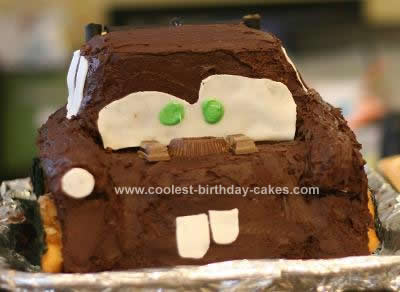 When I asked my son what he wanted for his cake for his third birthday, I was expecting him to say “chocolate”. Boy was I surprised when he asked for Lightning McQueen and Tow Mater from the movie Cars. So I try to clarify: ” you mean a cake with toy cars on top, right?”. … Read more