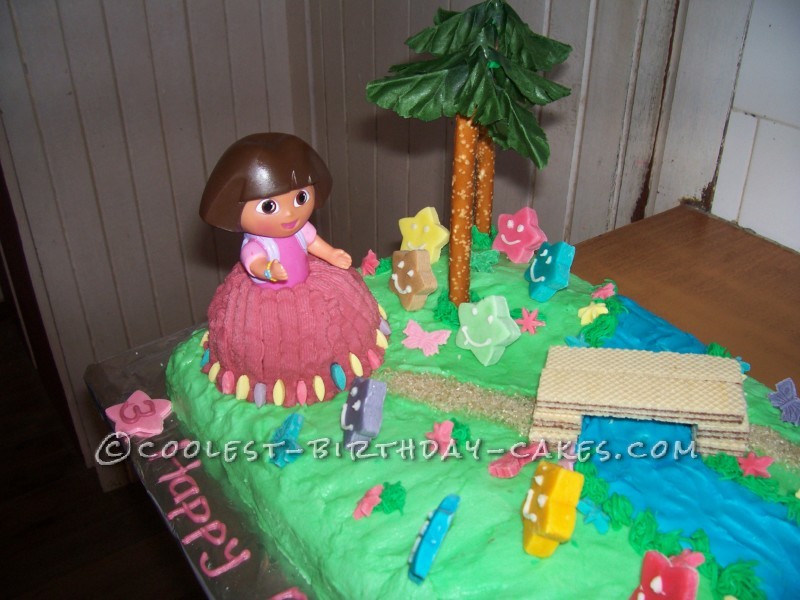 I had never made a scene cake before and the idea was intriguing. After looking at many photos of scene cakes, I decided that I wanted Dora to have an adventure. I baked 2 sheet cakes and 2 very small round cakes (all chocolate). As luck would have it, the larger of the two rounds … Read more 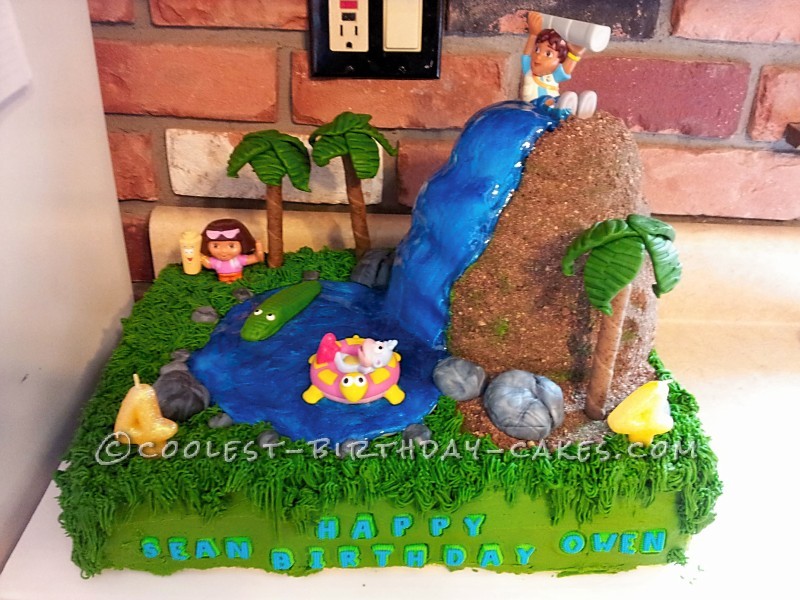 This Dora and Diego cake for my twin sons’ 4th birthday was a huge project.  I knew that making Dora and Diego would be extremely time consuming so I decided to use little toy figures for them.  Since they weren’t going to be edible, I wanted the rest of the cake to be really special.  … Read more 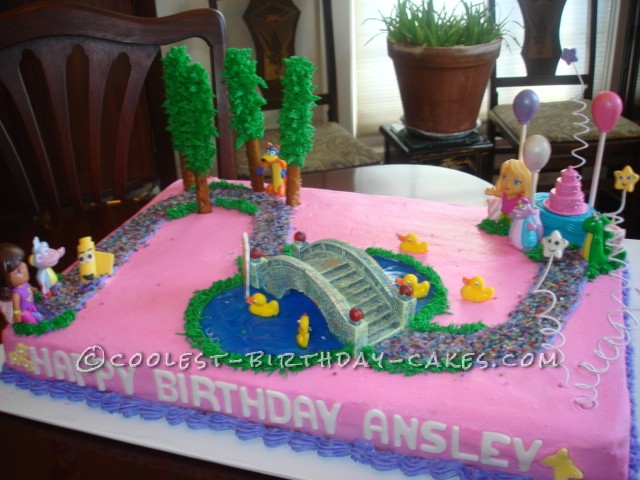 The Map tells Dora and Boots to follow the path, thru the forest (Swiper hiding), over the bridge (past the grumpy ole troll), and finally arrive at Ansley’s birthday party. This is a large cake – 1/2 a sheet cake.  WASC cake with butter cream icing.  The tree’s were pretzel rods and used a # … Read more 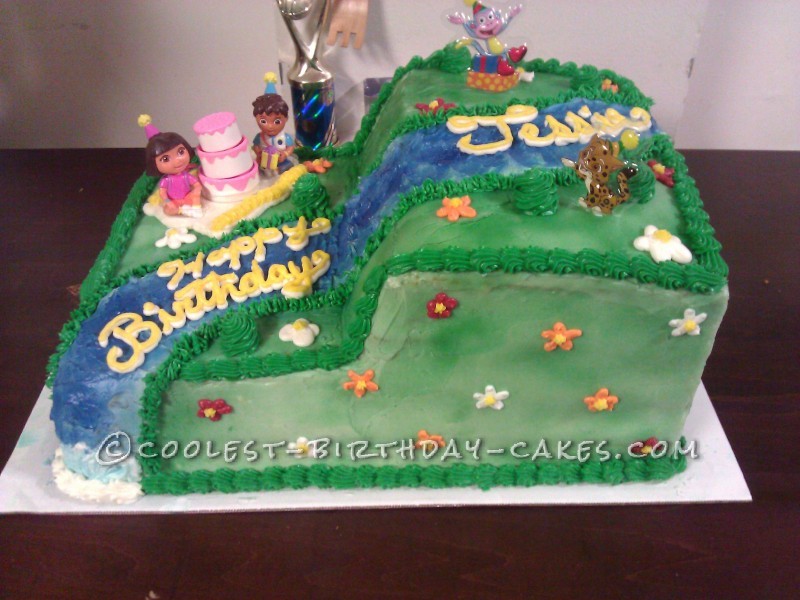 well the cake took me 4 hours to make i made the buttercream and the filling.the filling was cookies and cream buttercream.one side was 2 layers and the other was 4 layers.i sprayed it green with my spray gun.the water was blue icing i cut in to the middel of the cake the part where … Read more 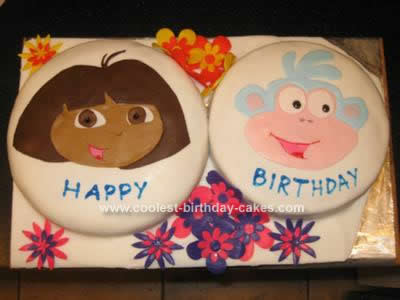 This Dora and Boots Double Cake was for the birthday part of my 3 year old daughter. We had a lot of guests and I decided one cake won’t be enough – hence the double Dora and Boots showing. The cake was regular yellow cake covered with fondant. In between layers and below the fondant … Read more 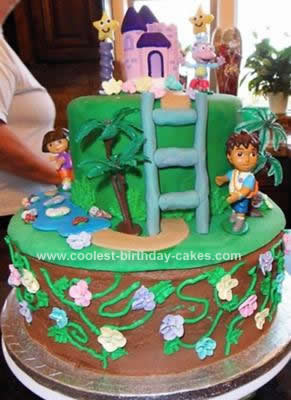 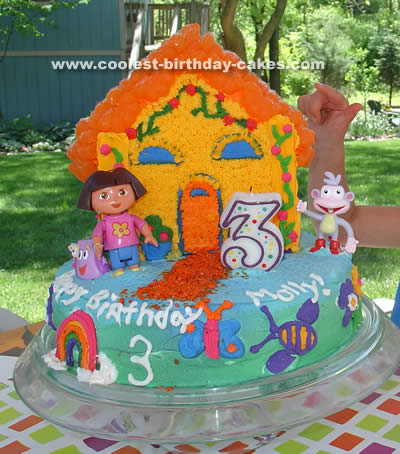 My three year old daughter wanted a cake that was “where Dora the Explorer lived” I was slightly stumped, how to create such a Dora birthday cake? I decided to use the Wilton house cake pan and tweak it slightly. It turned out to be very easy to do. I baked a 10inch round for … Read more 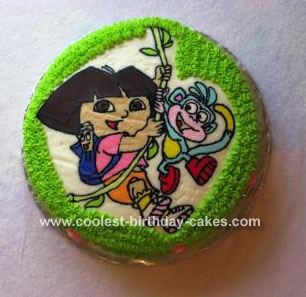 I made this Dora and Boots cake for my youngest daughter’s second birthday. She loves Dora the Explorer and was very excited to be having a “Dora Party”. I’m relatively new to cake decorating (have only decorated 4 cakes prior to this one). I turned to the internet for some ideas on how to get … Read more 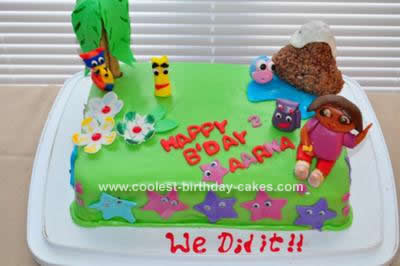 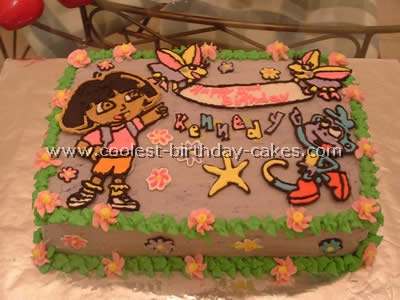 For this Dora birthday cake, I started with a 13×9 pan. I made 1 chocolate for the bottom and a white cake for the top. I iced the cake with purple buttercream. I used green buttercream and made green leaves as the top and bottom border of the cake. I placed pink drop flowers along … Read more 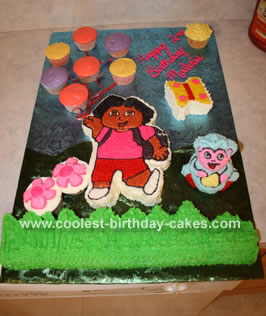 I made this Dora and 3D Boots cake by baking an 11×15 half sheet cake, and then cutting out the Dora and grass shapes. The Dora shape was retrieved from the internet, cut out, and used as a guide when cutting the cake. The cake doesn’t have to be cut into the exact shape of … Read more 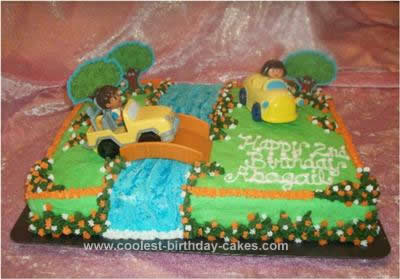 My 2 year old granddaughter saw a cake similar to this Dora Birthday Cake Idea at Walmart and fell in love. I searched the internet to find the toppers and it came up 16-$18.00 everywhere online so I went back to Walmart and asked if they could sell me the toppers. Not thinking that they … Read more 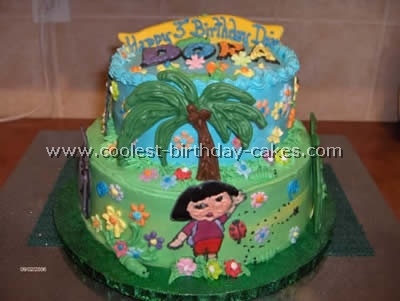 I used two tiers of cake for this Dora birthday cake; an 8-inch base with a 6-inch top. The figures are chocolate transfer figures. The palm trees, flowers, ladybugs etc. are cut out fondant. 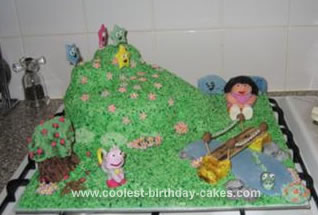 My daughter is Dora mad. I saw all the pictures of the Dora the Explorer cakes here and decided I would do something a bit different. I started by making two 8″ round cakes, cut them and stuck them to look a bit like a mountain. I covered the cake and cake board with green … Read more 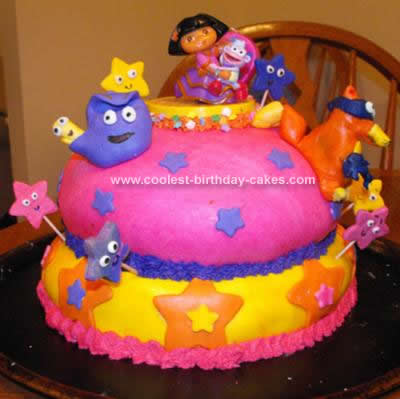 This Dora the Explorer Birthday Cake I made for my daughter’s second birthday. As many little girls, she is taken with Dora and since we bought her a Dora toddler bed for her big birthday, I made this cake as well. Since our older son has his birthday 7 days prior, I also made him … Read more 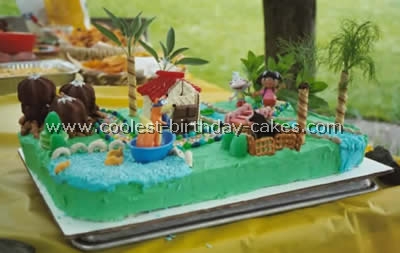 The cake base was baked in a deep 1/2 sheet pan used to make coffee cakes and available at restaurant supply stores. 2 layers of 1/2-sheet pans would also work to give you a large cake for the Dora birthday cake scene. The figures were from a Dora set. The candy path Dora and Boots … Read more 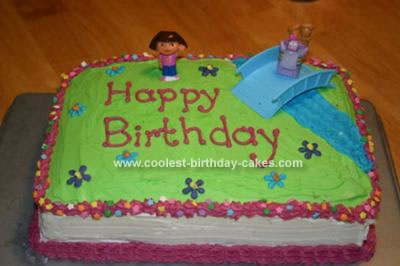 I made this Dora the Explorer cake for my daughter’s 2nd birthday. She requested a Dora cake. I decided to go with a scene and just add Dora figurines because I was unable to get any food coluring to make black in my small town. I baked two 9×13 chocolate cakes and made my own … Read more 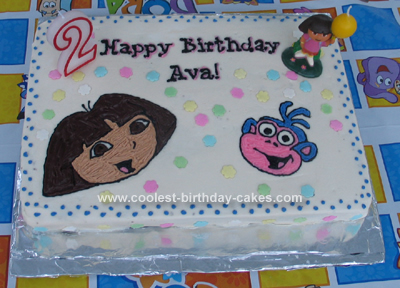 Here’s the Dora & Boots Birthday Cake I made for my daughter’s 2nd birthday. I can throw a bash for 40 -50 people, no problem, but I’m not a very experienced baker and this was only the 2nd decorated birthday cake I’ve ever made! I was so stressed about finding a good cake recipe that … Read more 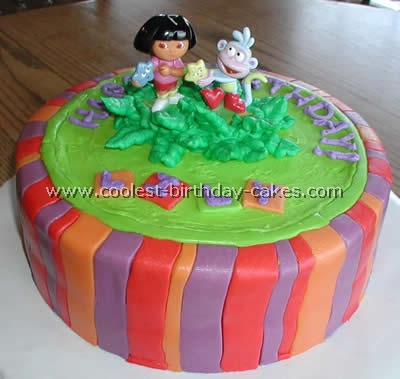 I made this Dora birthday cake for my niece Lilys 3rd birthday. The idea came from the invitations and the plates. I used two 14″ circle cakes and frosted them LIGHTLY with butter cream frosting (light green on top). Next I used a leaf tip to make large leaf for the top on a wax … Read more 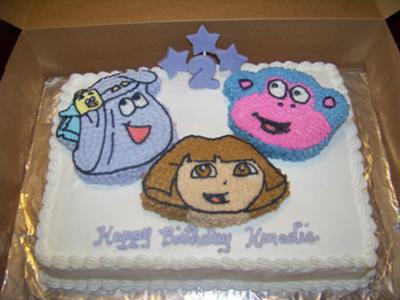 I cut out the characters from a separate cake. I printed pics from the internet and used wax paper to transfer the lines to my cake. I used the star tips for all of them. 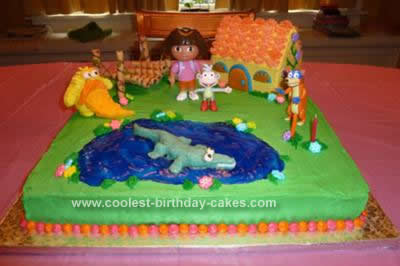 My two year old loves Dora so that seemed like a great idea for a party. I searched this site for just the perfect cake and found several I loved. I decided to do a Dora scene birthday cake. I took ideas from several cakes I saw here and created this. The base is a … Read more 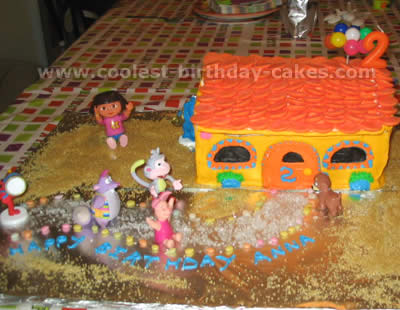 I wanted this to be a party at the house of Dora the Explorer (a house with all my daughters favorite characters there). The Dora the explorer house is a two layer rectangular cake with the roof being another cake cut and pieced together to make the triangle. The roof tiles are orange candy melts … Read more 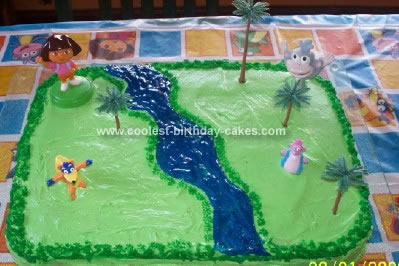 The Dora cake that I had made was the first birthday cake I had ever made. My daughter who was having her third birthday, had asked me to please make her cake. I did buy the box cake mix and also the already made icing. I started by baking the cake and cup cakes the … Read more 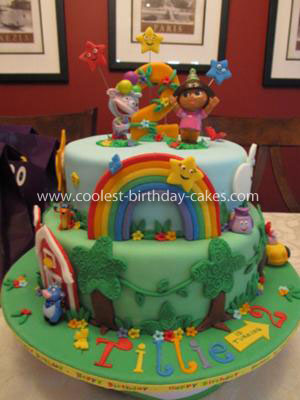 I made this Dora 2nd Birthday Cake for my granddaughter’s 2nd birthday. Dora the Explorer is her favorite show so of course that is what I had to do for her birthday. The top tier is a 8″ butter cake with raspberry filling and butter cream icing and the bottom tier is a 10″ chocolate … Read more