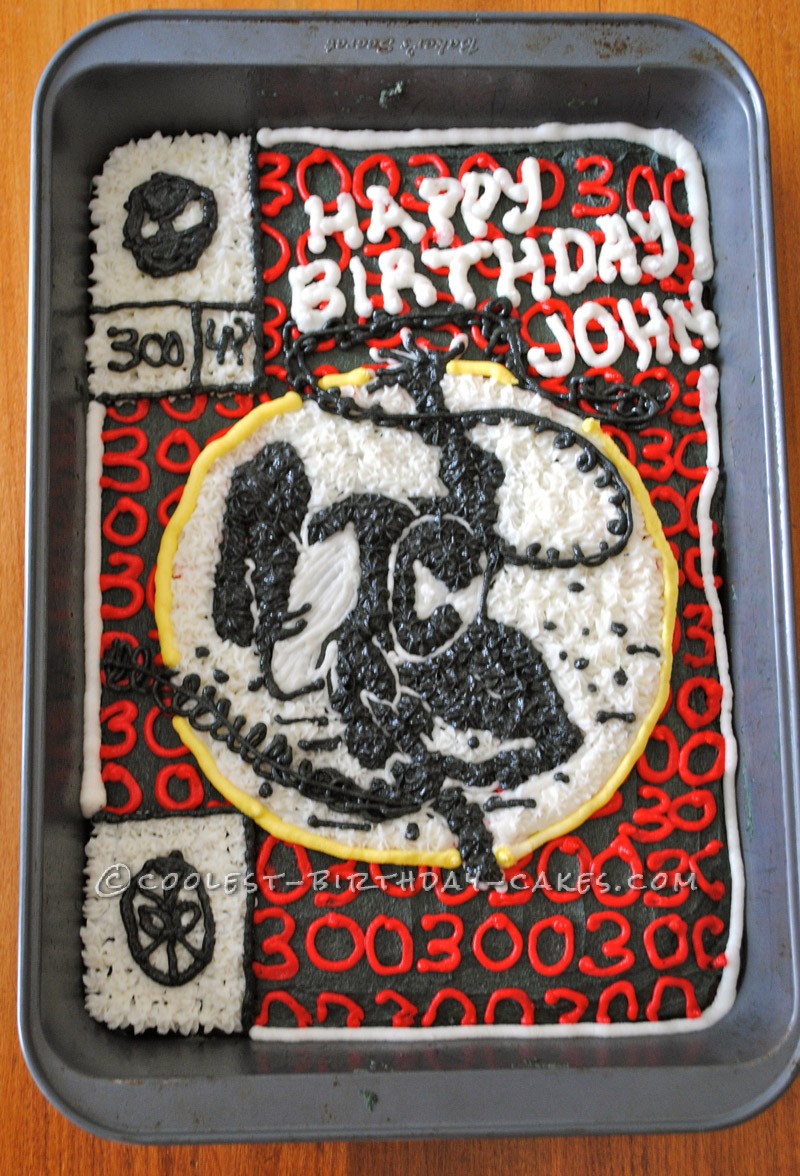 I love my husband very much and so I made him this cake replica of the cover of The Amazing Spider-man 300, which was the 25th anniversary cover, for his 25th birthday. It came out pretty close to the original cover, which definitely made it all worth it! 300 is one of his favority issues … Read more 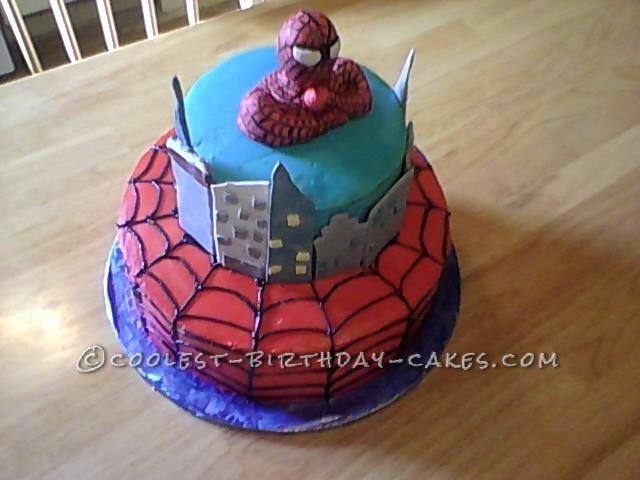 I made the Spiderman and buildings from fondant. Spidy is watching and rubbing his chin as he takes in the view of New York city. This Spiderman birthday cake was made for a friend’s son and was canceled the night before after 11pm because they had gone to Chuckie Cheese the week before and forgot they had ordered the cake. … Read more 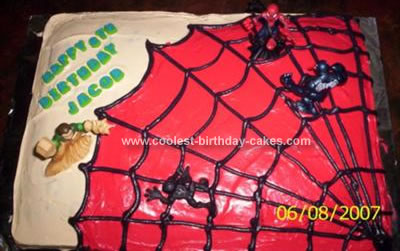 My son wanted a Spidey Cake for his 8th Birthday. I just baked a 9 x 13 chocolate and a 9 x 13 vanilla cake and laid them side by side on a cake board covered with foil. I covered the whole thing with generic white frosting from a can. Then I colored my own … Read more 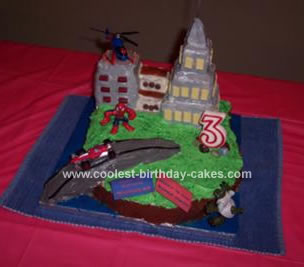 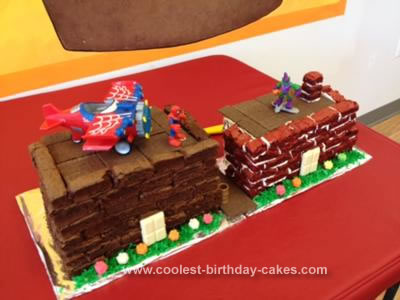 For my son’s 5th birthday, I made him a “cake” of brownie towers with Spiderman and Green Goblin about to square off on the rooftops. So, technically, this isn’t cake, but it could be done with layer cakes made in square or rectangular pans. I used foil-covered Styrofoam blocks at the centers and built the … Read more 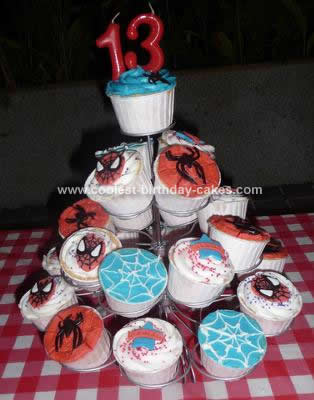 I made these Spiderman cupcakes for my son’s birthday a few months back but did not have time to submit the pictures until now. My son is 13 and he was specific that he did not want a childish design. I decided on cupcakes with symbolic designs instead of a large cake. I decided on … Read more 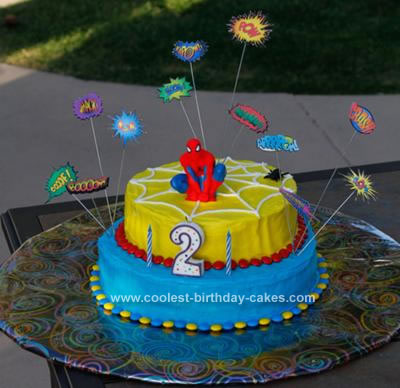 This Spiderman birthday cake was a simple cake to make. I used 2 boxed cake mixes. From each box I made one 10 inch and one 8 inch layer so I ended up with two 10’s and 2 8’s. I used M&M’s for edges and piped the web on the top. I had a Spiderman … Read more 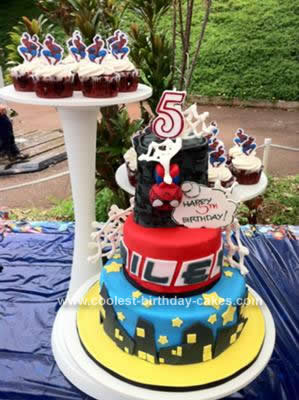 All three layers of the Homemade Spiderman Cake are dark-chocolate flavored. When you Google dark chocolate cake, it’s the first cake recipe that comes up so you know you can’t go wrong. The cake is dense enough to stand up to the heavy layers of this cake. I used the Wilton recipe for buttercream icing … Read more

My son Patrick and nephew Anthony LOVE Spider Man! For his fourth birthday party he asked for a Spider Man party and Spider Man cake. Although I like the Spider Man cake pan I didnt really feel like buying it, plus I wanted something different that they would really be excited about. To make this … Read more 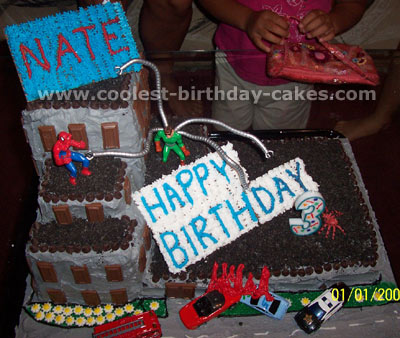 For this Spiderman cake, I used 9X13 cake pans and 2 bread pans. Using fishing line, I cut the cakes the sizes and shapes that I wanted. As far as the buildings I just stacked and restacked until they looked good. Using Hy-vee Whipped Icing dyed gray I covered the cakes, layers and all. I … Read more 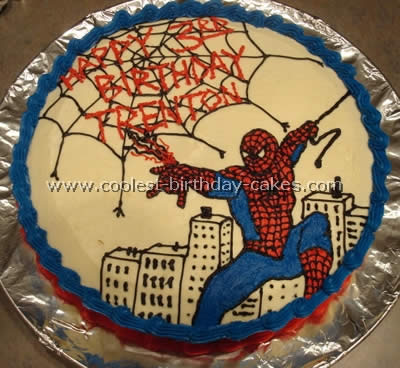 This is a Spiderman cake I made especially for my nephews third birthday. I used the Wilton 12″ round pan and one and a half boxes of cake mix for that specific pan. After baking I leveled it off and used homemade icing (Wilton recipe) in red blue and white. I used black store bought … Read more 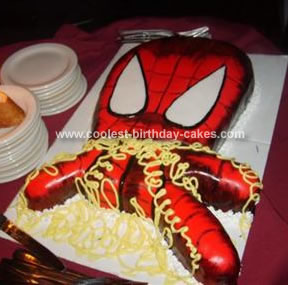 This Spidey cake was actually very simple to do. I baked a rectangle cake and carved it to the shape I wanted. Then covered it with red fondant icing. I took a foam paint brush, about the size used to paint trim, and dipped it in water and went over the fondant to make it … Read more