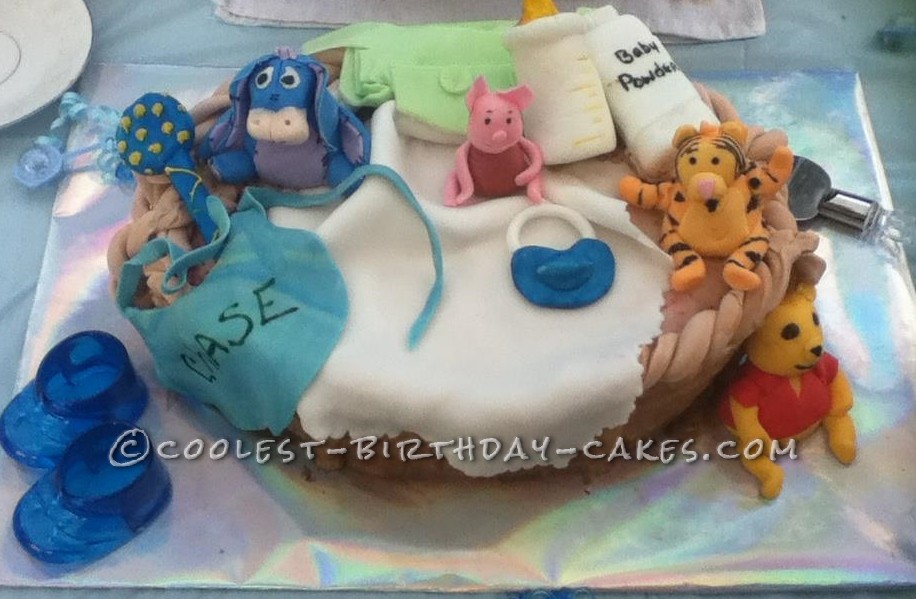 I started making cakes around five years ago. When my niece found out she was having a boy and wanted a Winnie the Pooh on the cake, I couldn’t help myself. The idea came to add both the basket cake idea with the characters for his room. At the last minute I added in the bib … Read more 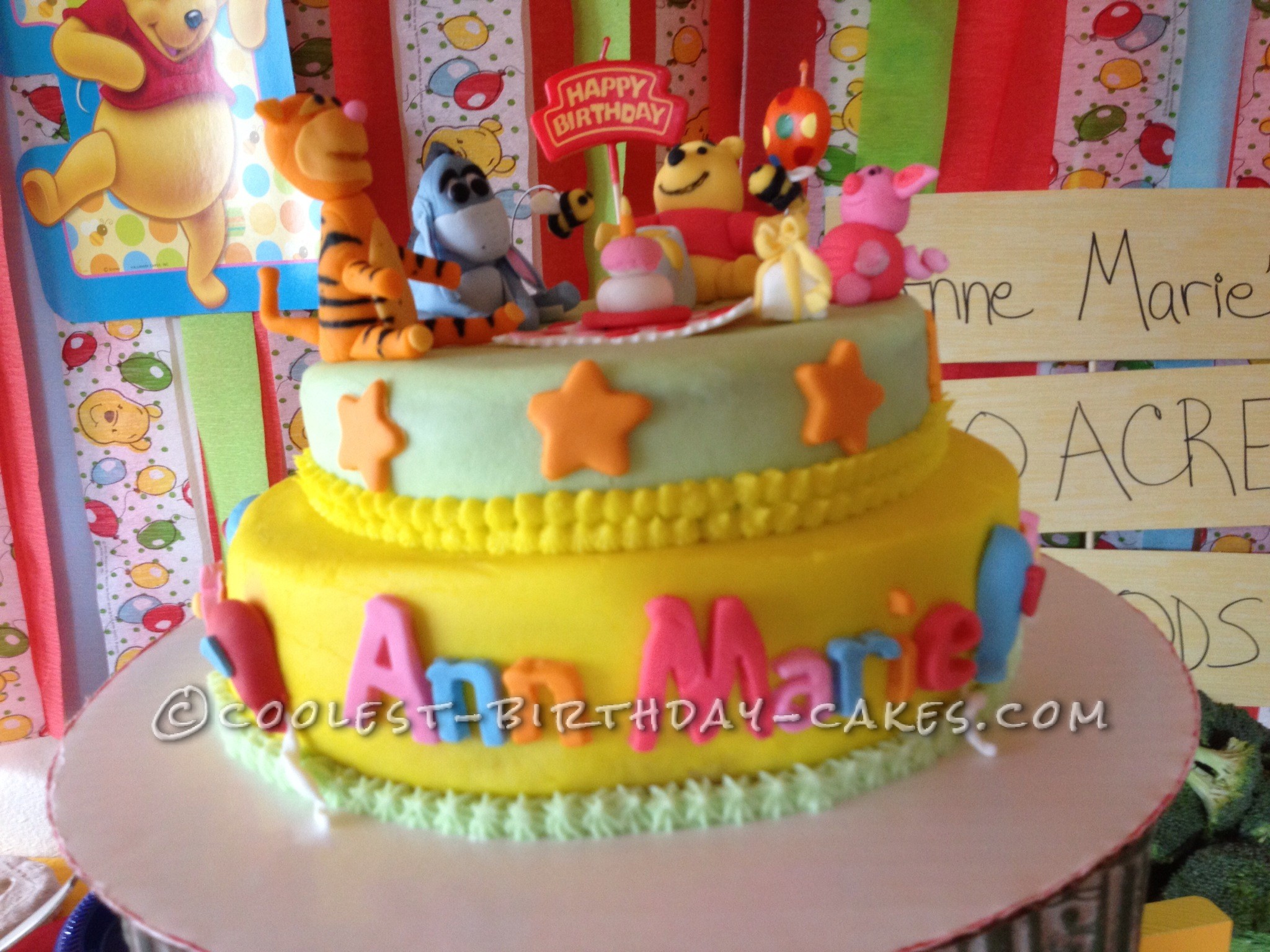 This is a cake for my friend’s daughter’s 1st birthday. She sent me a lot of photos of cakes she liked. Then I came up with what I thought I could do best. First I’d did the toppers, Winnie the Pooh was my first. My husband did not like the one I did first, so … Read more 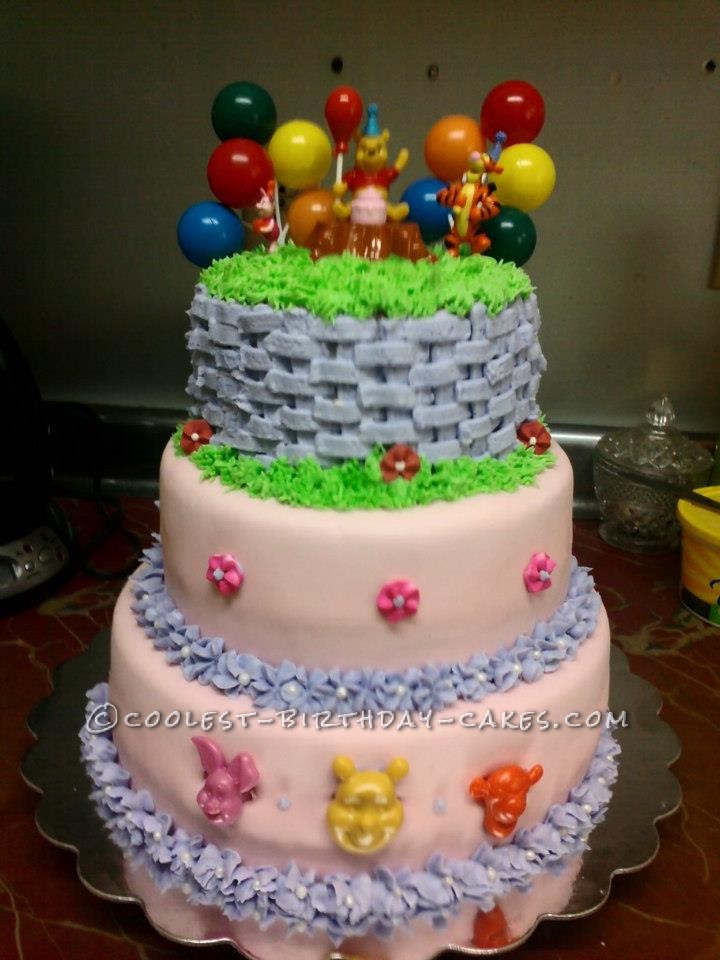 Wow, I have so much to say about my Winnie the Pooh cake. This is probably the biggest cake I have made yet. This cake is 3 tiers, and each tier is 2 layers. Each tier is a different type of cake. Bottom tier 1 is vanilla cake with vanilla butter cream filling, tier 2 is Ghiradelli … Read more 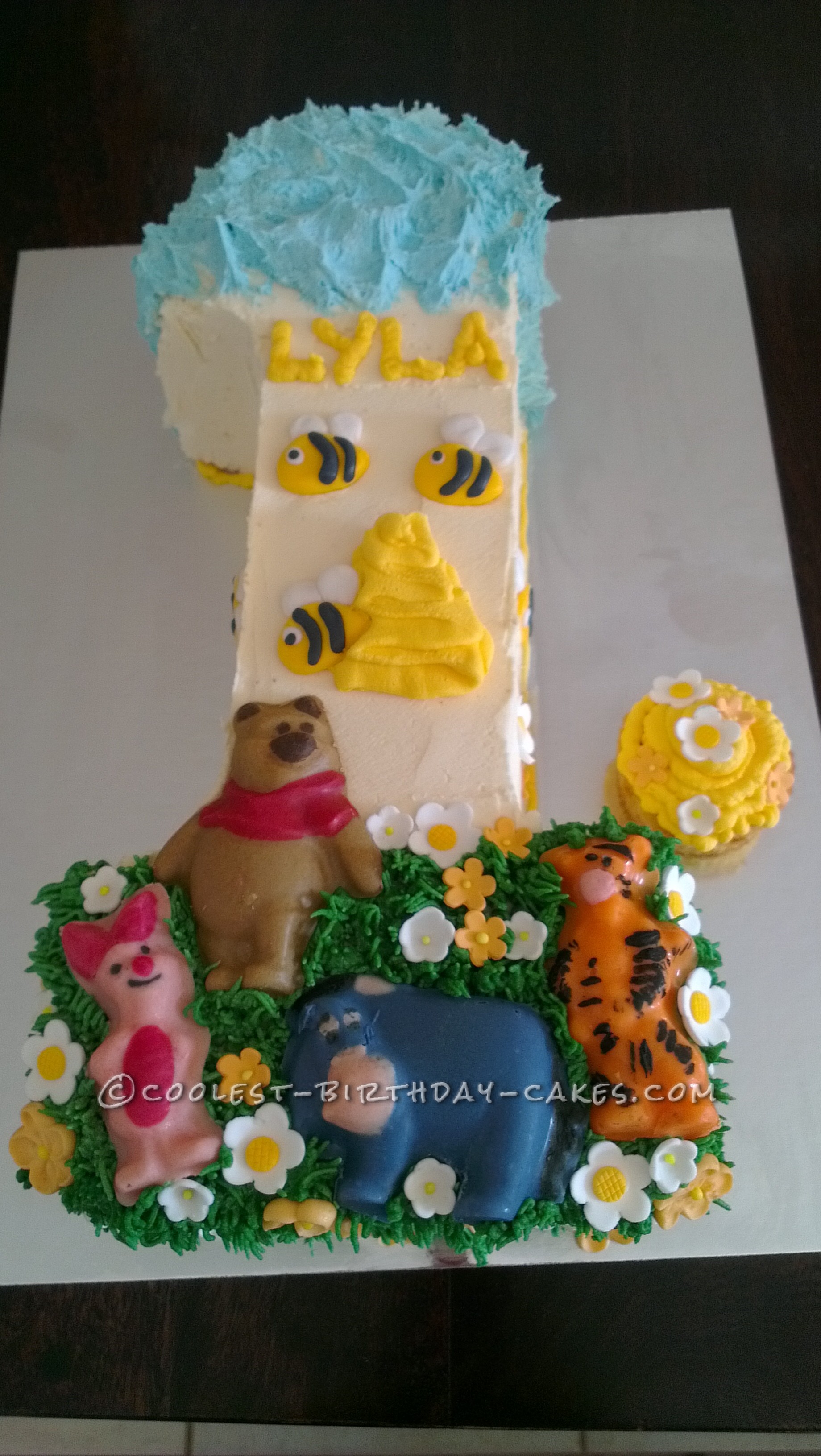 I made this Winnie the Pooh cake upon request from a friend of a friend, it was for her little girl Lyla who was turning 1. I wanted to challenge myself so I went and got the #1 shaped tin and thought, omg, how am I going to incorporate Pooh Bear into such a small space. I went … Read more 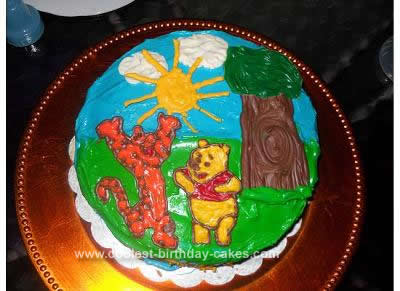 This Pooh & Tigger Cake is the first cake I have made. My son broke his leg and wanted to cheer him up with a family gathering. I used a store bought lemon cake mix and buttercream frosting. I colored some of the frosting in sky blue for the sky and green for the grass. … Read more 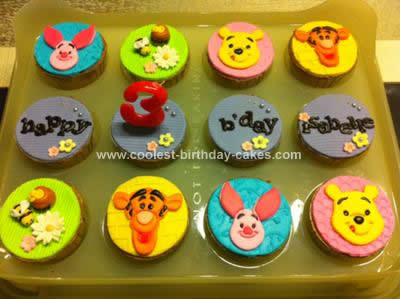 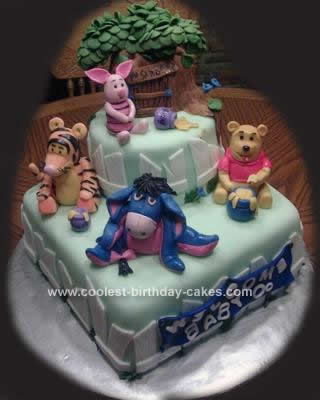 This Winnie the Pooh and Friends Cake was a very special cake for me to make. It was my dad’s oncologist’s wife’s baby shower cake. It was the first time I have made any character cakes. It was fun. It was a white chocolate cake with vanilla icing. The tree trunk was rice krispie treats … Read more 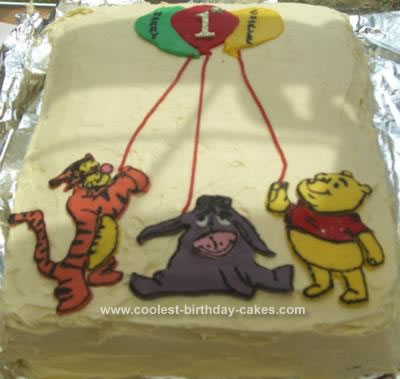 I used a straight roasting tin and made two sponge cakes. I placed them on top of each other to cut them straight so they are exactly the same size. I then stuck them together by filling it with raspberry jam and frosting. I cut the top of the cake flat and covered it in … Read more 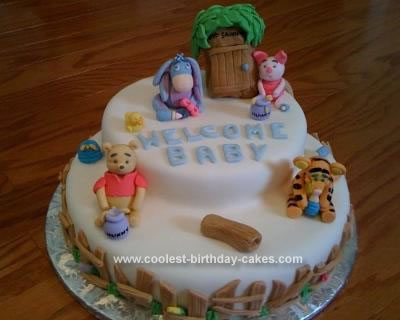 This Pooh Baby Shower Cake is a 12inch round cake with a nine inch round on top. Iced and rolled fondant, covered as one cake. All figures are handmade with gumpaste. Thanks for looking. 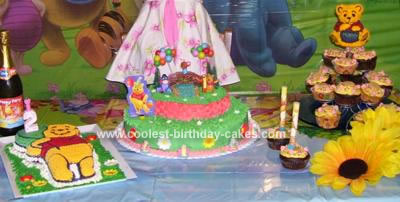 I wanted to make a Winnie Pooh birthday cake for my daughter’s 2 year birthday. I looked up and found some GREAT ideas from this website. This Winnie Pooh Birthday Cake is what I came up with. It took me an entire day to make them. The first cake (in the middle of the picture) … Read more 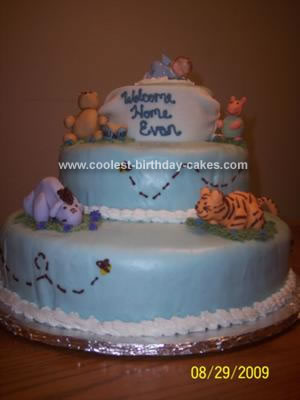 I made this Pooh Baby Shower Cake for my cousin’s new baby. He was a twin and his brother passed away at birth, this is why there is an angel on the top laying on a cloud. Evan spent 72 days in the NICU, that is why the cake says Welcome Home. I started by … Read more 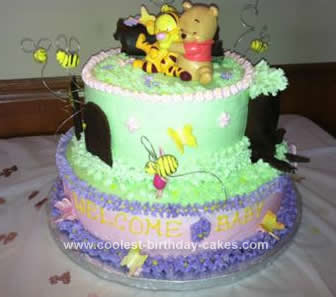 I made this Baby Winnie The Pooh Shower Cake for my cousin’s shower. She is someone that I used to babysit when she was a baby so I wanted her first baby shower cake to be special. She has always been a fan of Winnie the Pooh so that is what her sister asked that … Read more 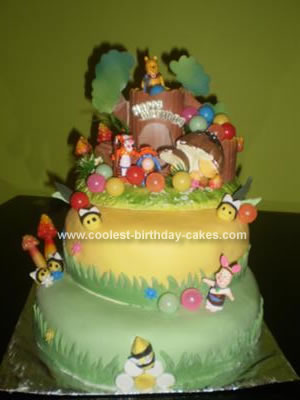 I made this Winnie The Pooh Birthday Cake for my little one when he turned 2. I made 2 chocolate sponge cakes, so they looks higher. The biggest one I put on the bottom, then placed second layer which was smaller. I also made some bees from icing a month before. The cakes were covered … Read more 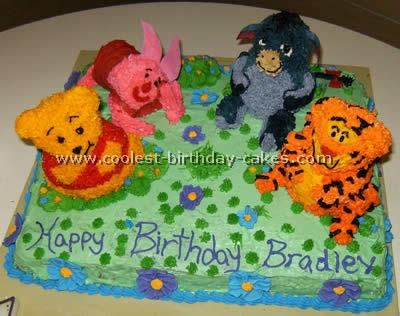 I used two rectangle pans for the base. I used regular cake mix but it started to sag due to the weight of the characters. I would recommend using a mixture of pound and regular cake mix. For Winnie the Pooh and friends I used the 3D Cuddly Teddy Bear pan and buttercream icing. I … Read more 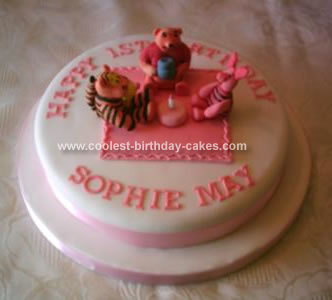 I made this Winnie the Pooh cake for my friend’s daughter’s 1st birthday as she is mad on Winnie the Pooh. The cake is a plain sponge which is filled with jam and buttercream then covered with fondant. The figures are made from flower paste and as they are quite heavy I inserted a cocktail … Read more 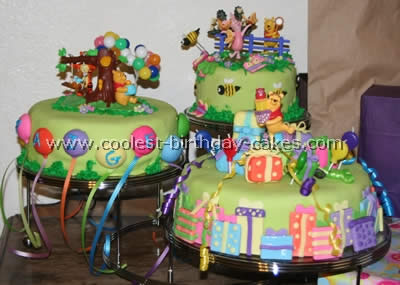 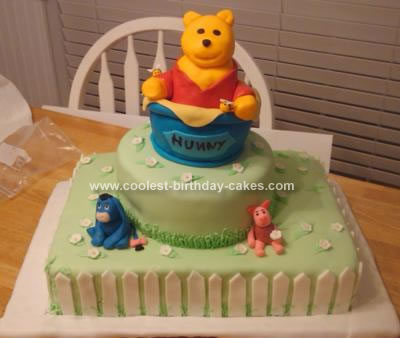 We decided on a Winnie the Pooh theme for my son’s first birthday party. I looked for cake ideas on Coolest Birthday Cakes and other sites and really liked the idea of a Pooh Hunny Pot Birthday Cake. The bottom cake is a raspberry poke cake. (White cake mix with raspberry jello mix poured into … Read more 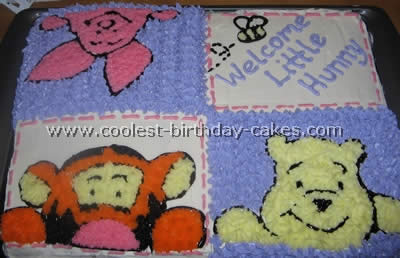 This cake is made from two 9×13 cakes; one side is chocolate and the other side yellow. After baking the cakes I timed off any uneven spots, placed both cakes side by side on a cookie sheet and put in the freezer. I found pictures of Winnie the Pooh and friends (Pooh Piglet and Tigger … Read more 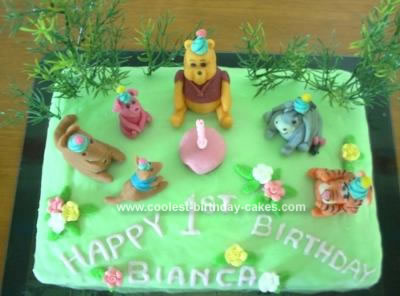 I made this Pooh and Friends Birthday Picnic Cake for my daughter’s 1st birthday. I used the butter cake recipe from the Huggies website. I doubled the mixture and used a roasting pan to bake the cake. It took a bit more time to cook than stated in the recipe due to the size of … Read more 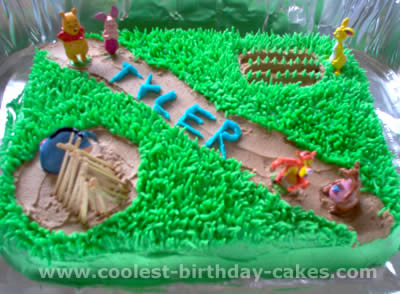 I made this Winnie the Pooh and friends cake for a friend’s baby shower for her little boy. Just baked a rectangular cake and took chocolate frosting and put it on where I wanted Rabbit’s garden, the path and Eyore’s home. Toothpicks were used to make Eyore’s house. In Rabbits garden I raised rows, took … Read more 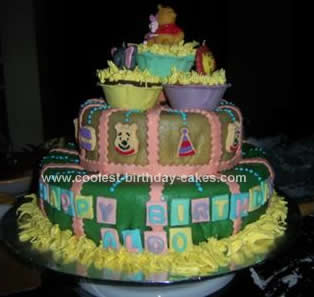 I made this Homemade Winnie the Pooh and Friends Birthday Cake for my 3 year old son, Jerome Aldo, as he was very eager of any Pooh things. So I decided to create my own idea of Pooh world and friends into a cake. This is a 3 stages cake. For the top level, I … Read more 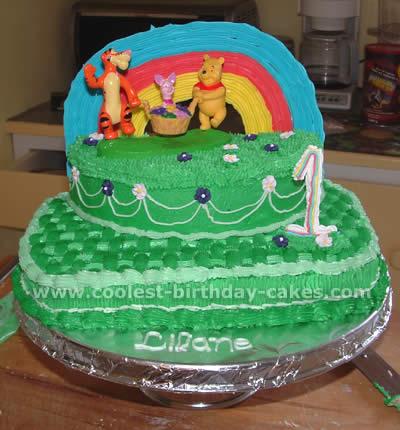 I made this Winnie the Pooh and friends cake for my daughter’s first birthday. It was also the first cake I ever made. I took my inspiration from many cakes I saw on the internet. I wanted a cake with a lot of dimension. I made the rainbow and the 1-inch royal icing tree days … Read more 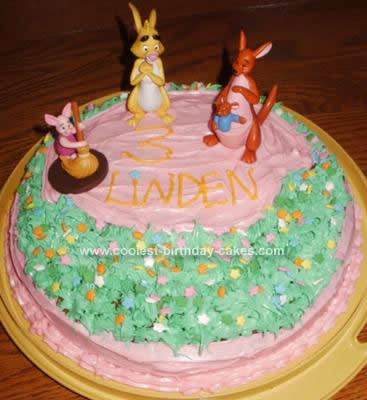 I had purchased a Winnie the Pooh and Friends Figurine set from Disney store for my daughter’s 3rd Birthday (as a gift). As I was searching for cake ideas, I thought, why not use them as cake decorations? So I got inspiration for this Pooh’s Friend Birthday Cake from other “Coolest” cakes and here’s what … Read more 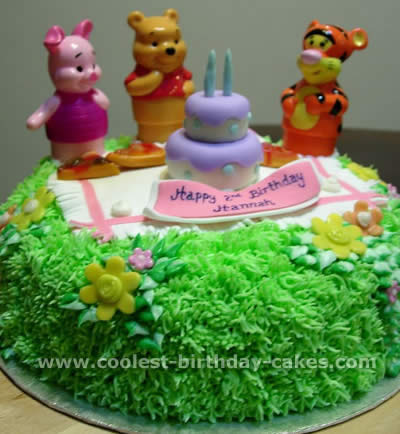