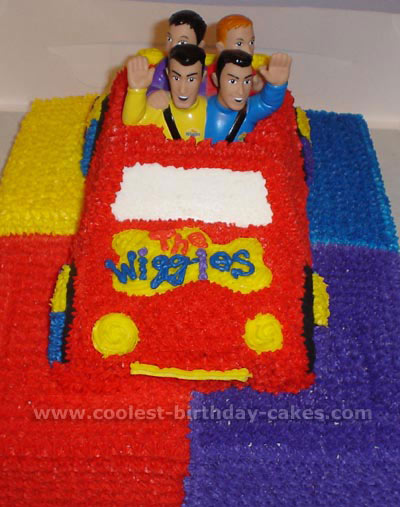 For this cake I started with a half sheet cake for the base under the Wiggles car. I put a thin layer of white icing over the whole Wiggles cake and then marked it into 4 corners. I decorated that cake first using a #18 star tip. It took a really long time to do … Read more 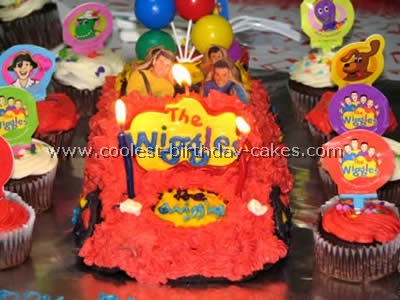 This is my first attempt making a character birthday cake from scratch for my son, who turned 2 years old on June 27th. These birthday cake ideas for children were rather challenging for me, it took me 5 hours solid, including making and icing the cupcakes!!! Alexander is a huge fan of the Wiggles so … Read more 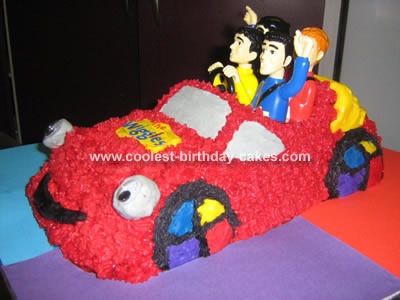 I got the design for my Wiggles Big Red Car cake from the other wonderful cakes on this site. I used the standard star tip technique, which is no-where near as hard as it looks. I bought a Wiggles car toy and pulled it apart to get the figurines and steering wheel to sit in … Read more 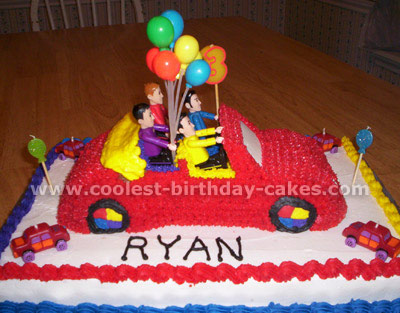 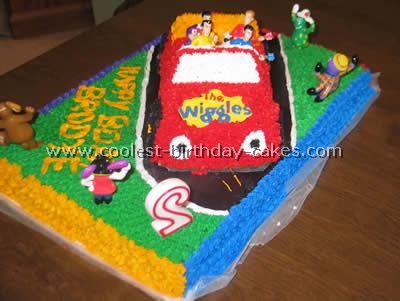 My son LOVES the Wiggles. For his 2nd Birthday, I decided to make him a Wiggles Cake. This was the second cake that I had ever attempted (other than your standard round cake with store icing). I got the idea from scanning birthday cake ideas for children from this website and one person that had … Read more 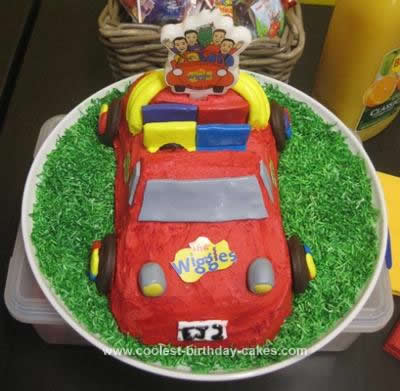 My two year old son LOVES The Wiggles ‘Toot Toot Chugga Chugga’ so for his 2nd birthday I decided to attempt the Wiggles Big Red Car birthday cake. After seeking guidance from this website and some others I sought to hire the Wilton 3D Car tin and set about planning my creation. The Cake: I … Read more 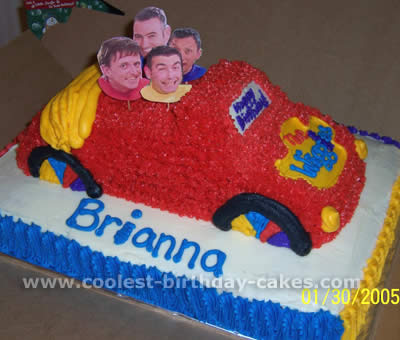 I used the car pan from Wilton to create the convertible car from the Wiggles. I looked at the Wiggles logo online and drew it on the car. Instead of using icing for the guys heads, I printed their pictures from the internet and taped them on toothpicks. A stacked cake presentation created a color … Read more 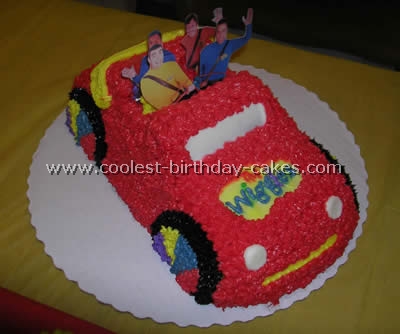 I was inspired by all the other birthday cake ideas for children of the Wiggles Car on this site. I used cutouts of the Wiggles in the Big Red Car for the Wiggles. The second cake, I cut out in the shape of the Wiggles Logo and used star tips to write “The Wiggles”. Thanks … Read more 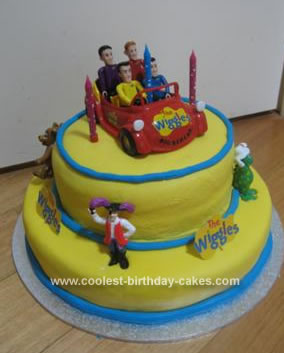 This Wiggles birthday cake was made for my son’s 3rd Birthday. I made two large round cakes (golden buttercake), in two different sized tins. I halved each cake, filling them with buttercream frosting before covering each cake with ready-to-roll coloured icing. I needed two large packets to cover this cake. I coloured the icing with … Read more 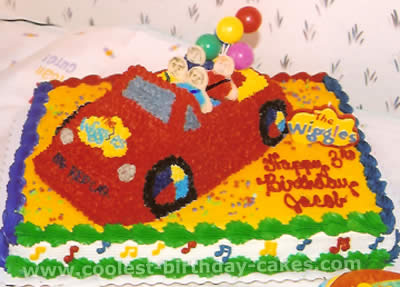 My 3 year old loves The Wiggles. I was browsing the web and found this neat website. I got one idea from Lena G. Wiggles cake. I got another idea from pictures and just combined them all together. The base of the cake is a 1/2-sheet cake. To find a big enough sturdy board, go … Read more 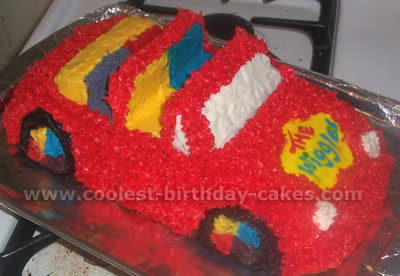 My daughter loves The Wiggles. I decided to try to be creative. This is my first attempt at a cake like this. I bought the 3D car pan from our local Hobby Lobby. It took 1-and-a-half boxes of cake mix. I started icing from the middle of the car out. The Wiggles in yellow on … Read more 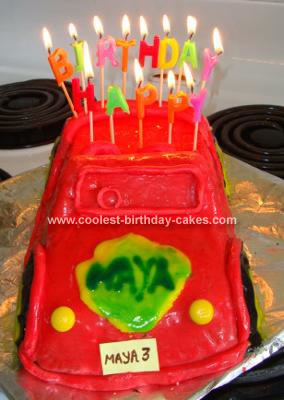 I made this Wiggles Birthday Cake for my daughter’s 3rd birthday. I did read the other submissions on this website to get ideas on how to bake this cake. My daughter absolutely loved the cake, so thank you all the mums who helped me bring a smile to Maya’s face. I used the Wilton car … Read more 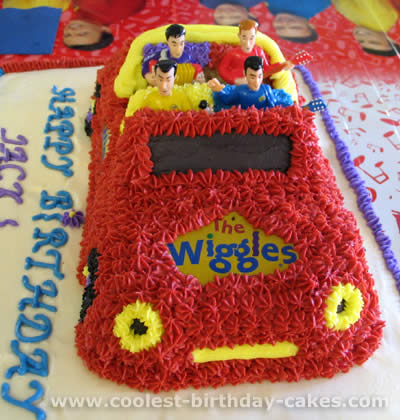 I got my idea from the other Wiggles cakes here. I made it easier, I hope! I made the Wiggles car, using the Wilton car pan, with Rice Crispies instead of cake! I followed the Rice Crispies directions and let it cool. I used the star tip to decorate like you would a cake. I … Read more 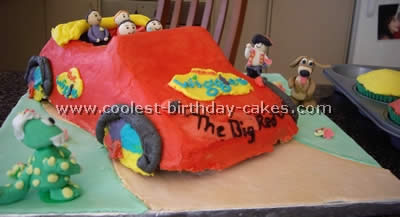 My nephew loves the Wiggles so my sister asked me (the resident cake maker) to make a Big Red Car for his second birthday. My inspiration was The Big Red Car DVD where they sing “Say Hello” and wave to all their friends (Henry, Wags, Dorothy and Captain Feathersword). I found ideas from other Wiggles … Read more 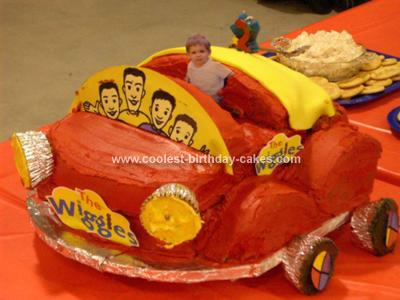 This Wiggles Birthday Cake was the first time I’d ever tried anything like this and my two-year-old grandson was thrilled with it! The cake inside was confetti which made for a cute CUT cake as well. He loved HIS own picture inside and kept saying “Garrison ride big red car!” I used cupcakes for the … Read more 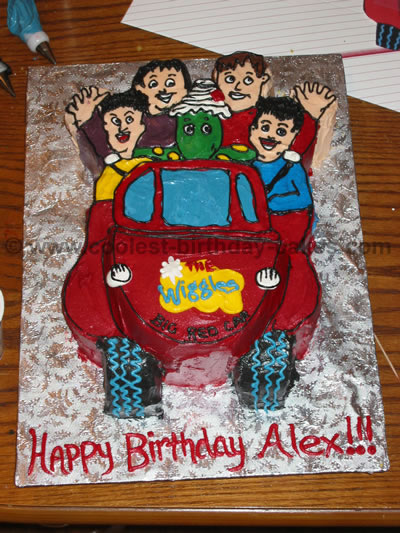 For this Wiggles cake, I started with a rectangular cake. I printed the image off on the computer, and placed it on to the cake. I carved around the paper to shape the cake. Then, I iced the Wiggles characters freehand using butter cream icing. 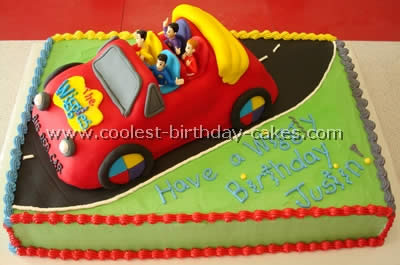 I am the designated cake baker for my best friends family so I was delighted when she requested a Wiggles Big Red Car Cake for her son’s second Birthday. I got the idea from many other wonderful Wiggles cakes from this website. The cake recipe is the 1-2-3-4 cake from the Joy of Cooking. I … Read more 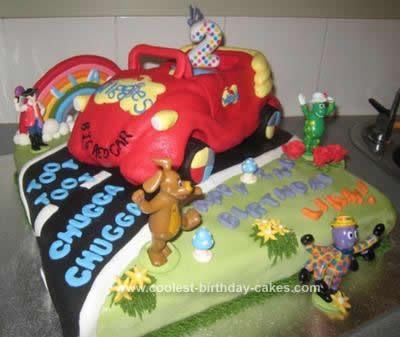 This Wiggles Big Red Car Birthday Cake was made for my son’s second birthday and was my very first attempt at a 3D cake and my very first experience with fondant. My 2 yr old is a huge Wiggles fan and we had decided to go for a Wiggles theme for his party. I was … Read more 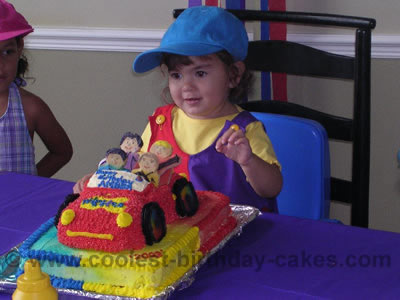 This cake was created for my daughters (Amber) 2nd birthday. She is a big Wiggles fan so we decided to make her the “Big Red Car” and of course the four Wiggles. The base of the cake is just a large rectangle cake pan. The car was a cake pan in the shape of a … Read more 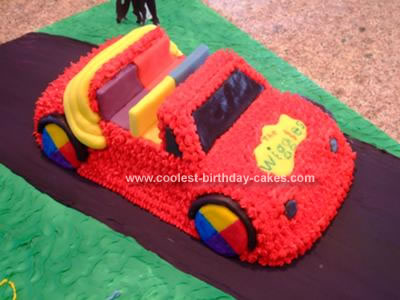 I made this Wiggles Big Red Car Cake for my daughter’s second birthday because she LOVED the Wiggles. I baked a yellow cake in the Wilton car cake pan according to the pan directions and then cut-out the top of the car to make it a convertible. I made a batch of marshmallow fondant using … Read more 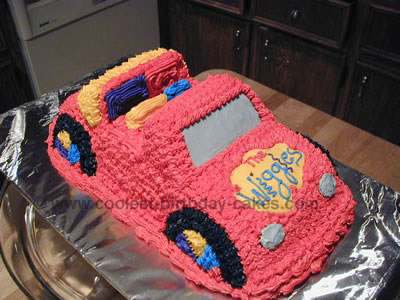 My son is a Wiggles Junkie and he loves their Big Red Car. I was on a Wiggles craft site one day and saw a picture of a cake that a mom had made her son of the Big Red Car, so I emailed her to find out where she got the cake mold… Wilton … Read more 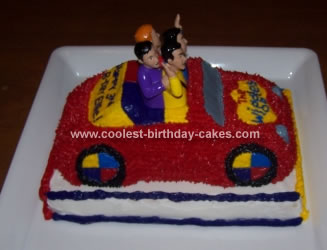 My daughter loved the Wiggles, so we made her a Wiggles Big Red Car Cake for her 3rd birthday. We used a Wilton 3-D Cruiser Pan to make the car. After the cake cooled, we cut off part of the top to make it a convertible like the Wiggles drive. We placed the entire car … Read more 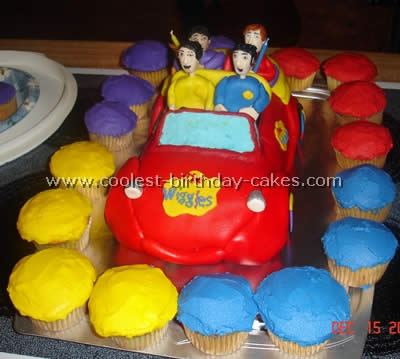 I used the Wilton cruiser pan and cut the top to make it a convertible. Next I covered the cake with buttercream and then fondant. I used a book wrapped in foil to lift the cake up then attached fondant wheels. I used buttercream to decorate the Wiggles logo. I made the Wiggles and the … Read more 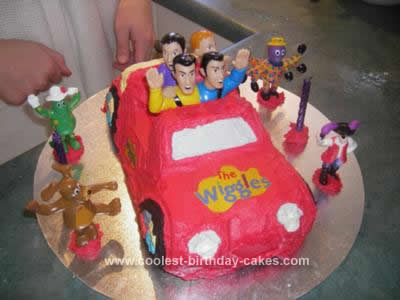 I made this Wiggle Car Birthday Cake Idea for my son’s 2nd birthday, he was absolutely obsessed with The Wiggles at that time so I knew it would be a hit. I hired the Wilton’s car cake tin and used 1 ½ packets of Betty Crocker’s Devil’s Food Cake mix to make my cake. I … Read more