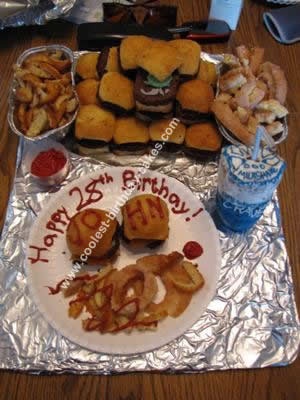 Be prepared! This Homemade Sliders Burger Cake Design is time-consuming! Still here? Good luck! Sliders are cake mix and brownies. “Fries”- I will explain later what these are. “Onion rings” are glazed sour-dough doughnuts from Jewel. The cake was basic store bought white cake (yellow is best for the way it turns golden brown on … Read more 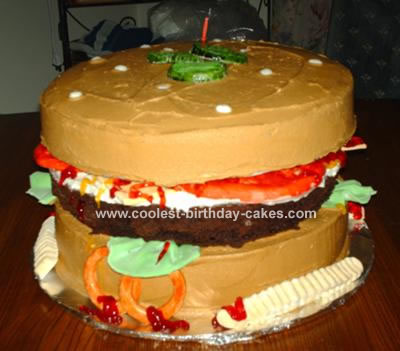 My cousin, being twelve, asked for a hamburger cake for her birthday after seeing a picture of one in an old decorating book. So we obliged her, making this monstrous cake (had to feed enough for twenty 12 year old girls)! The ‘bun’ is two french vanilla 12′ rounds, the ‘burger’ is a chocolate cake … Read more 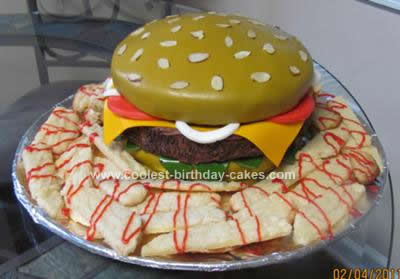 I made this Hamburger Birthday Cake for my son’s 11th birthday. For the bun I baked 2 yellow cakes and for the hamburger I used 1 devil’s food cake. All were baked using an 8″ round cake pan. I iced the hamburger using chocolate frosting and then used chocolate sprinkles to give it a beefy … Read more 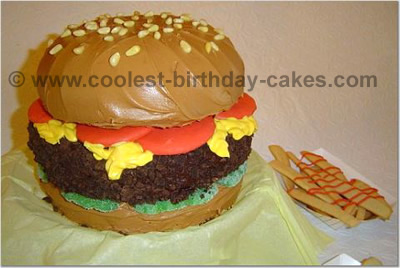 I found the recipe for this cake design by doing a search on Google for “hamburger cake”. My nieces birthday theme was a backyard Bar-B-Que and this was perfect. The hamburger gets its realism from crushed cookies pressed into the chocolate icing. The cakes are pound cakes so that they will hold a more solid … Read more 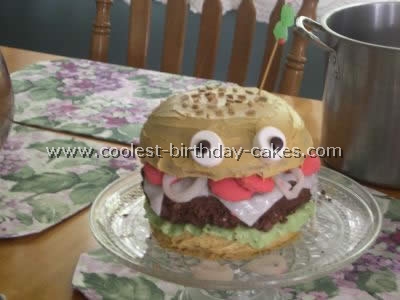 I made this hamburger cake using a 9″ cake pan making 3 cakes. One for the top and the bottom, which were frosted with light brown tinted frosting, and one for the hamburger, which was covered in chocolate frosting and then covered with crushed cookies. The eyes were marshmallows, with M&M’s; the lettuce and cheese … Read more 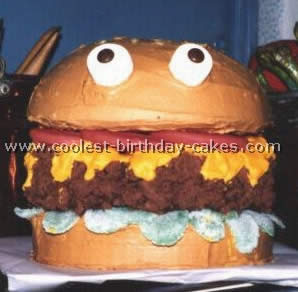 I used three cake mixes for this hamburger cake, baking the top bun in a Pyrex bowl and the other two were baked in 9-inch round cake pans. The hamburger meat was achieved by first icing one cake layer and then covering with crumbled chocolate cookies. The bottom of the bun was made with the … Read more 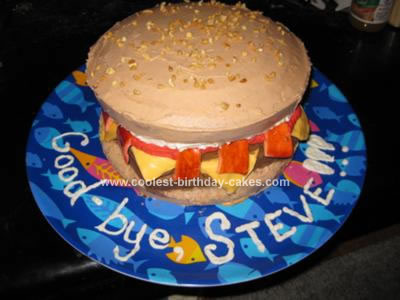 I got asked by a former boss if I would be able to make a cake in the shape of the Baconator sandwich from Wendy’s. I thought it would be a hard job but I DID IT! For most of this Baconator Cake I just used homemade buttercream icing. I used pieces of fondant and … Read more 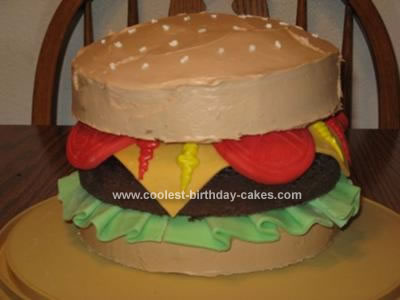 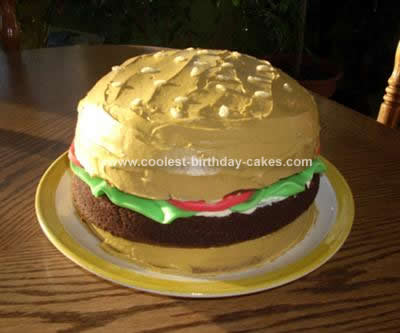 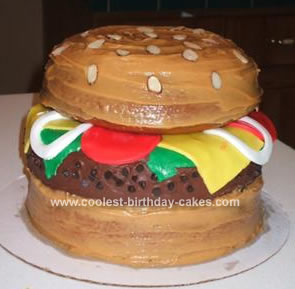 I made this Hamburger cake for Fathers Day. I used two yellow cake mixes and one chocolate cake mix for the patty. I used peanut butter frosting for the bun, top and bottom so it would be the proper color. I found the recipe for this frosting on all recipes.com For the cheese, lettuce tomatoes … Read more 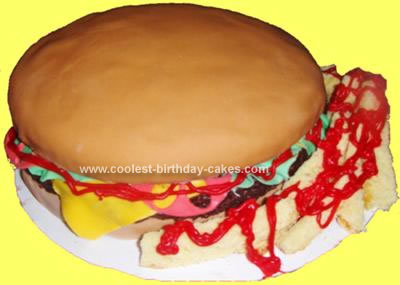 I had an extra cake on hand, this is from an 8×3 round pan. The top had a perfect bump to resemble the top of a bun. First I sliced the cake twice to give me 3 layers of cake to make this Cheeseburger cake. I worked on the top layer first. Covered it with … Read more 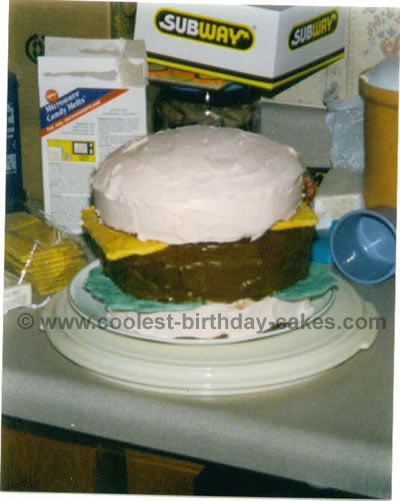 This cheeseburger cake was done with 2 mixes in 3 layers.  Tinting the frosting the right color for the bun and the cheese was the hardest part. Frost the bottom layer in bun-colored’ frosting and add lettuce and tomato slices.  Lettuce is made with tinted candy melts poured to the desired shape on waxed paper. … Read more 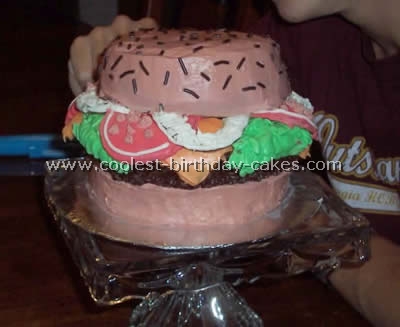 This is my hamburger cake (actually a cheeseburger) and I! I am 17 years old and I made this for my friend’s birthday. THE BUNS: For the bottom bun I used an 8″ round cake pan, and for the top I used an 8″ semi-circle pan. After baking the top bun, I shaved off part … Read more 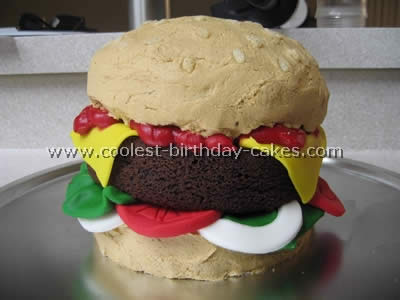 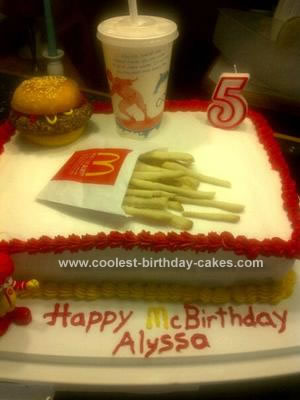 My daughter’s 5th birthday party was at McDonald’s, so I decided to make her a happy meal cake for an extra special McBirthday. This McBirthday Cake was a simple 9×13 double-layered cake (chocolate and vanilla) with butter cream icing that I made in red and yellow McDonald’s colors. The only non-editable items on top of … Read more 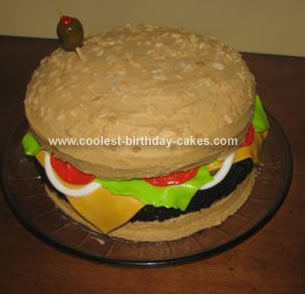 My hubby’s favorite food is burgers so I decided to make him a Cheeseburger Birthday Cake for his 30th birthday. Got most of my ideas right from this site. Used 2 white cakes for the “buns” – frosted with buttercream icing tinted with Wilton brown and Winnie the Pooh gold. “Meat” was a 9″ dark … Read more 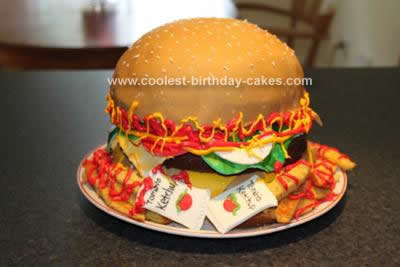 I made this Hamburger and fries cake for my kids. I have been practicing making cakes with fondant. This was my second fondant cake. I made homemade marshmallow fondant. I baked four cakes, I used 8″ pans, and one brownie in an 8in pan. I used two cakes for the top and bottom buns. I … Read more 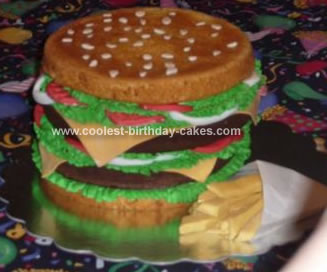 I made 1 yellow box cake for the buns and 1 chocolate box cake for the meat of the hamburger cake. I used fondant for the cheese, tomatoes, onions, sesame seeds and french fries. And for the lettuce I used canned icing (I thickened it with powdered sugar because it was too thin once I … Read more 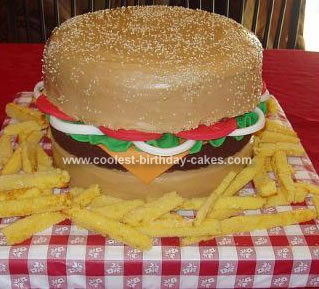 I have wanted to make a hamburger cake since I was a little girl and saw one at a birthday party. I have made a lot of cakes, a lot of great cakes. This cheeseburger cake was so simple and received, by far, the most compliments of any I have ever done! The men at … Read more 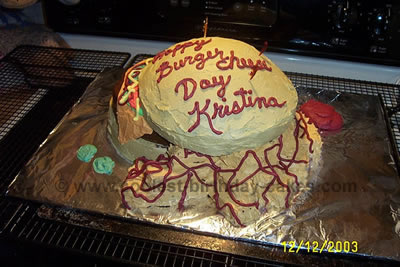 When my daughter was little she called cheeseburgers burgercheeses so for her 14th birthday I made this burgercheese cake with french fries. This cake design was made with 3 round cake pans and one square pan. I cut out the fries and stacked the burger iced with Wilton colors 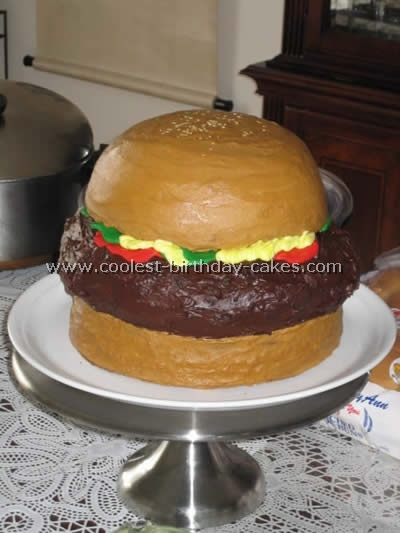 I got my inspiration from all the hamburger cakes listed on this website as well as googling “hamburger” on the web. I also made the sugar cookie fries as well, using an actual crinkle fry cutter that you can buy for under $3. I used the pound cake idea as well since it formed a … Read more 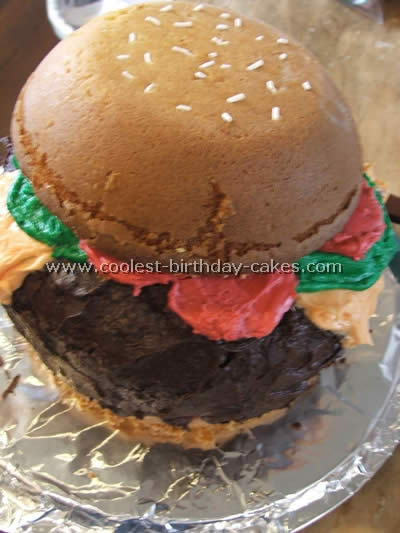 For the top and bottom bun of the hamburger cake we used one box of yellow cake mix. The bottom bun was made in a circular 9 inch pan and the rest of the batter was put in a duralex bowl which had the shape of a top bun and had a diameter similar to … Read more

There are several July birthdays in my family, so I decided to make a cake for my family members. I decided on a Hamburger Cake and got many ideas from contributors from this site. You all had such wonderful contributions. It was hard to pick one, so I used ideas from several entries. I had … Read more 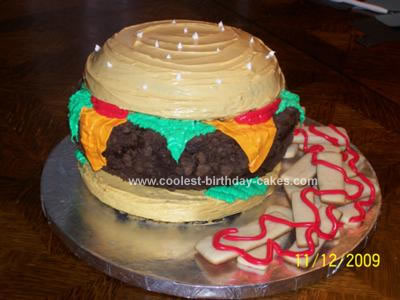 I made this Burger Cake for a 30th birthday. I used one cake mix divided into a 9 inch round and a rounded glass baking bowl for the bun. I used another cake mix in a pampered chef spring round pan for the hamburger. I used food coloring, yellow and a little brown to make … Read more