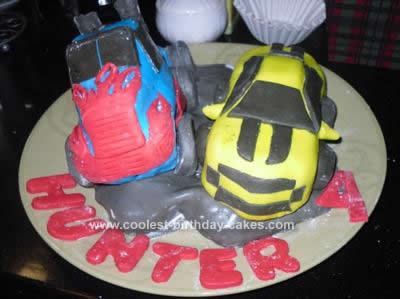 My son wanted Optimus Prime and Bumblebee on his 4th birthday cake. I found a wonderful marshmallow fondant recipe – very easy and very easy to work with. Used gel coloring for the fondant. I made Bumblebee out of 2 9in rounds; Optimus out of a 13×9 pan. I used butter cream icing under the … Read more 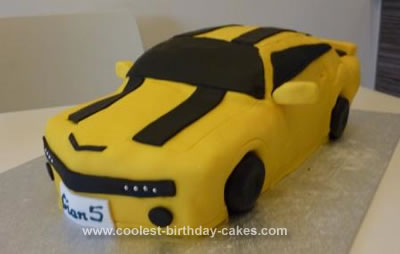 This Transformer birthday cake was for my 5 year old son who is mad about Transformers. I made sponge 18×18 cm, 4 of them about 4-5 cm depth each. I later realized that this was actually loads of cake and yet I didn’t have enough height for the scale model. I printed off profile pictures … Read more 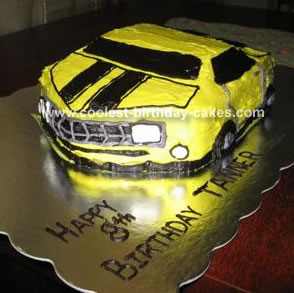 I have recently become interested in making my kids cakes. This year my son wanted a Transformers cake for his 8th birthday. We did a lot of looking online before he picked what he wanted. We settled ona Transformers Bumblebee Camero cake. I used 2 9X12 sheet cakes. I placed one on top of the … Read more 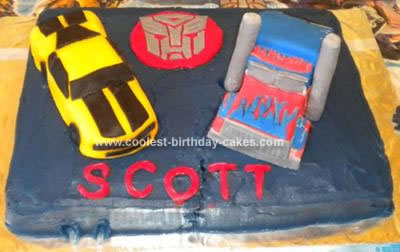 I made this Transformers Cake for my son’s 4th birthday party. He loves Transformers. He likes to watch the 80’s cartoons we have on DVD, but also likes all the new toys that are out from the newer movies. First, I make a sheet cake (half chocolate, half funfetti), and covered it with a steel … Read more 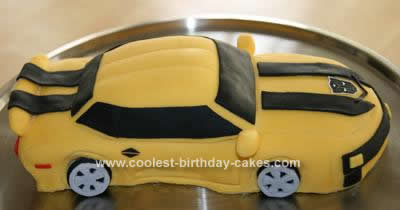 My son was really into transformers, so for his 4th birthday, I knew I wanted some kind of a Homemade Transformer Bumblebee Car Cake. I took a look at this site, and saw some Optimus Prime cakes that I thought were manageable, but of course his favorite was Bumblebee. I had never done a 3D … Read more 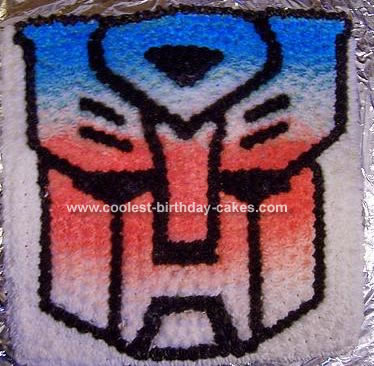 I made this Autobot cake for my nephew’s third birthday. I got the idea from a picture I saw of the Autobot insignia. I thought it would be relatively easy. I used a large square Wilton pan – 12X12 I think. The cake itself is half chocolate and half white. I used two whole cake … Read more 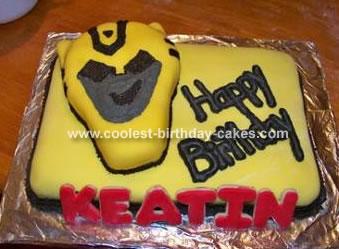 I created this transformer bumblebee cake (which is from the animated transformers cartoon) for a friend’s son. He wanted a bumblebee cake instead of the Optimus Prime cake that everyone else has to offer for a transformer cake/party. So I baked a standard rectangle cake pan, and a round cake. I used the round cake … Read more 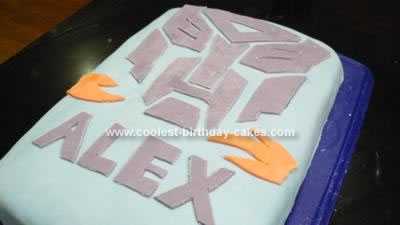 I was getting inspired by some of the beautiful fondant cakes and decided to give it a hand. My son loves Transformers. I got online and found a marshmallow fondant recipe and an Autobot logo. I printed out the logo and cut out the shapes. I make two batches of fondant. Then I used a … Read more 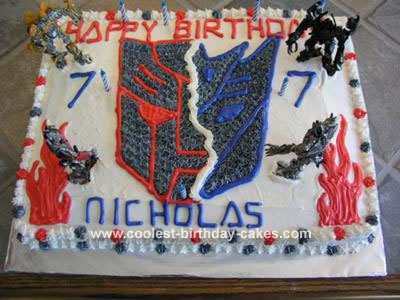 When my son said he really wanted a Transformers cake, and we looked at the grocery store, we were both disappointed at the “store bought” one. I love to make cakes, but after some stressful years, I told myself I’d always go store bought to ease the stress! I changed my mind with this one … Read more 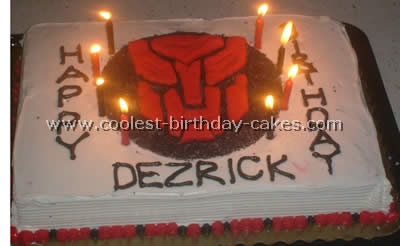 Our son asked for a Transformers party for his eighth birthday. After looking on the internet for hours and not finding a design I liked and thought I could do, I came up with this design. This was a 9×13″ white cake iced with white buttercream icing. Several people I had talked to said that … Read more

I baked two huge sheet cakes, one vanilla and one chocolate for this Optimus Prime cake. Then on a large piece of butcher block paper I drew out the body, making sure to use block or robotic type forms. I used fresh whipping cream and crushed Oreos as the filler for the layers. Then I … Read more 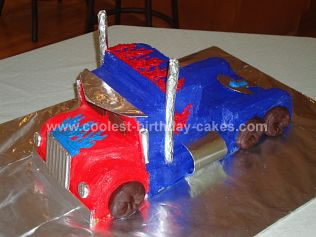 My Mom and I made this homemade Optimus Prime birthday cake for my son for his 4th birthday. We backed three cakes, two of them 9X13 and one loaf pan. We took my son’s small Optimus truck as a template. We stacked all the cakes together to see how large we wanted it. Next we … Read more