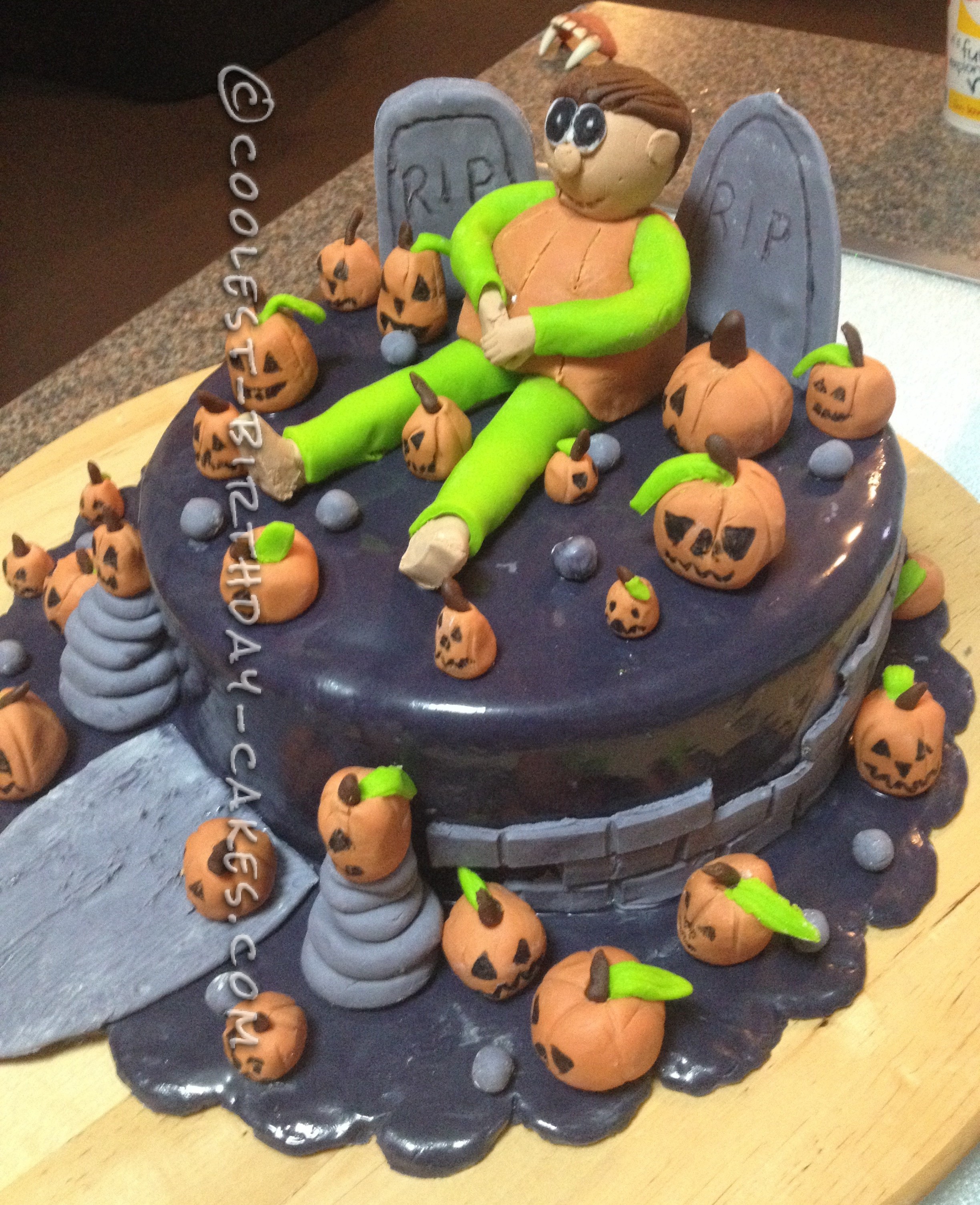 Over a few cups of coffee I made 31 different size pumpkins out of fondant for this last minute Halloween cake. While the chocolate mud cake baked away, I sculpted the coolest pumpkin man I  have seen with fondant also. When the cake was cooled I covered it in buttercream frosting and then I covered … Read more 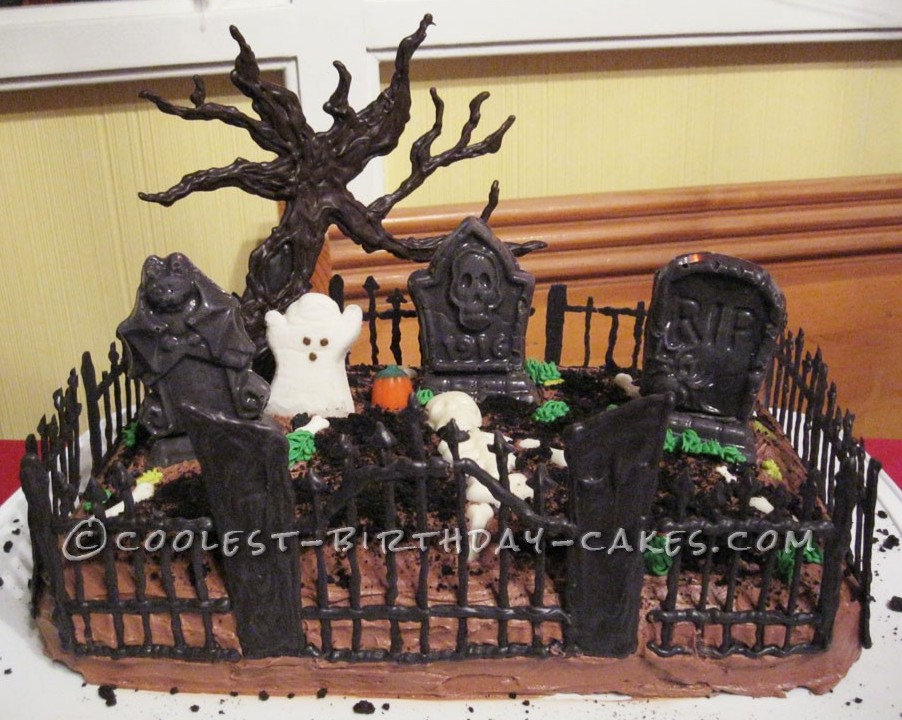 I’ve made graveyard cakes in the past but they never came out how I wanted them to look. So, I tried again with my Spooky Graveyard Cake and was very happy with it this time. Prepping the Cake and Accessories First, I gathered up a bunch of candies and treats for decorating the ground of … Read more

For my husband’s 40th birthday party I decided to go with an Over the Hill theme. I searched and searched for ideas for cakes and this is what I came up with. This cake is 2 layers of 9 by 13 cakes. After the second layer was placed, I cut out a small rectangular piece … Read more 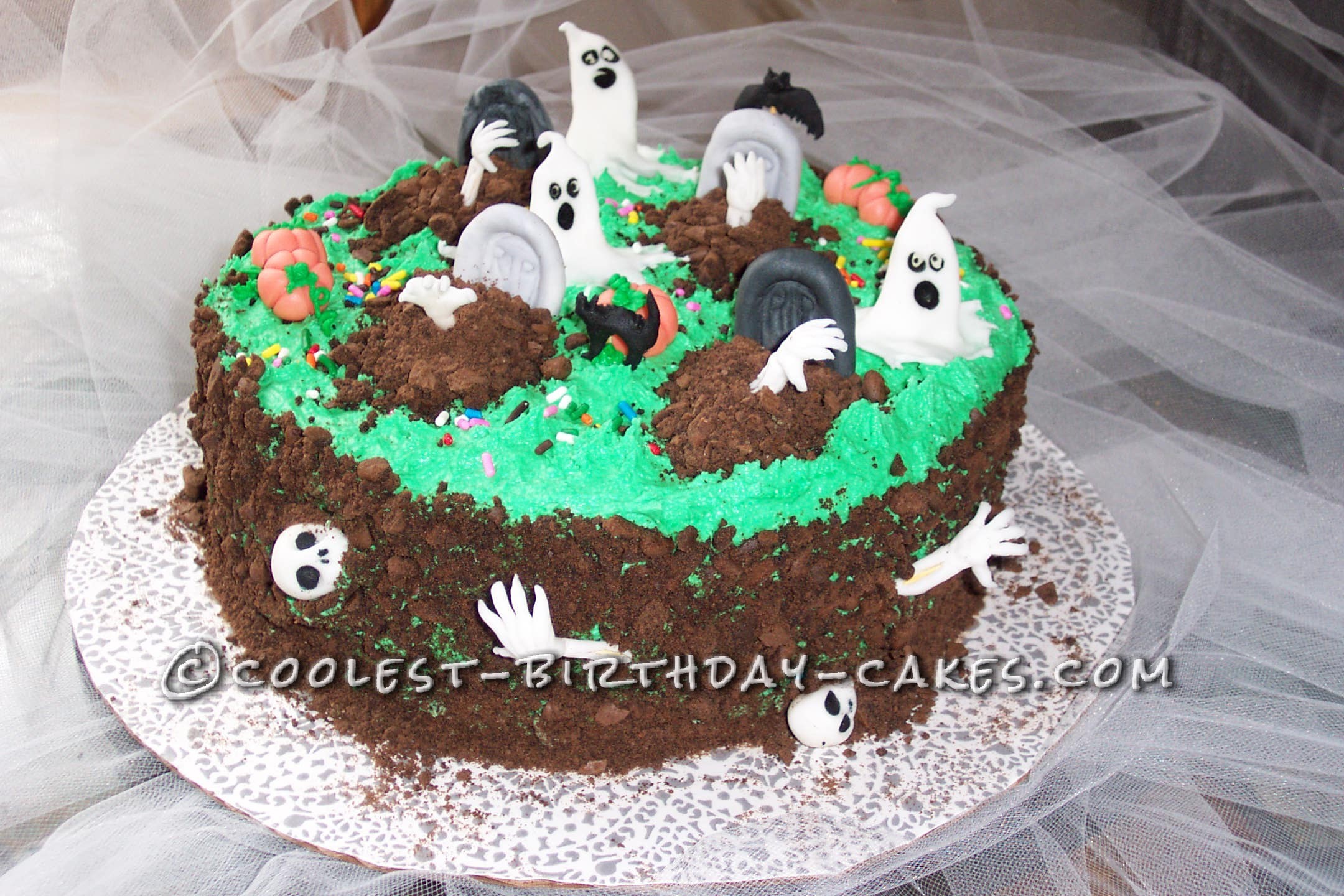 Using fondant mold and color the tombstones, ghosts, skulls and arms on a toothpick (make at least 8 of each). I then crush/pulverize dark cookies to look like dirt (I like to use Oreo’s). I frosted the cake with green frosting and on the top, after frosting, touched with the side of a knife and pulled up to … Read more 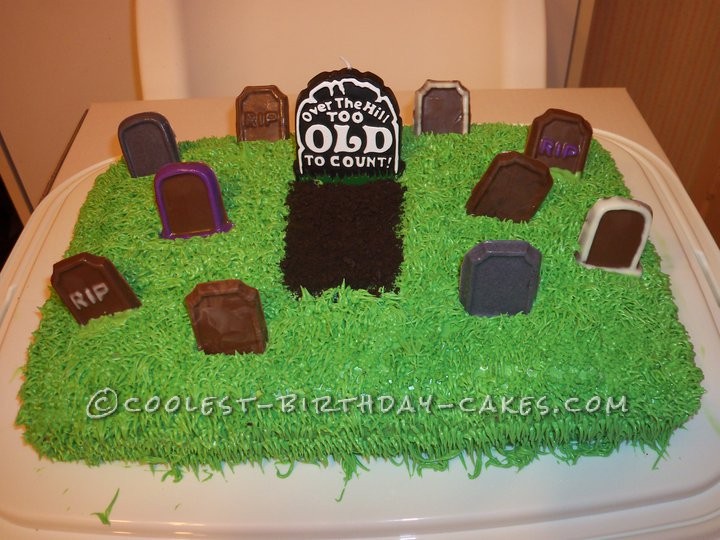 My mother turned 50 2 years ago. At 40 she had her 1st birthday cake ever (because her birthday is on Thanksgiving). She cried so hard over a plain cake I knew I had to do something good for her 50th. Well I also make chocolates  and have lots of molds for Halloween.  So I  broke out the … Read more 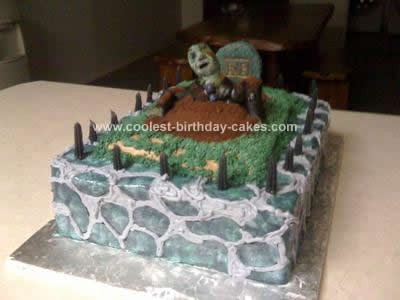 I made this Halloween Graveyard Cake for a Halloween party at work. It is entirely edible. The zombie/tombstone is made from modeling chocolate, painted with icing colors/alcohol. The top is cookie crumbs for dirt and buttercream grass. The sides are modeling chocolate sponge painted with blue/green/white with gray buttercream for mortar. The spikes are pretzel … Read more 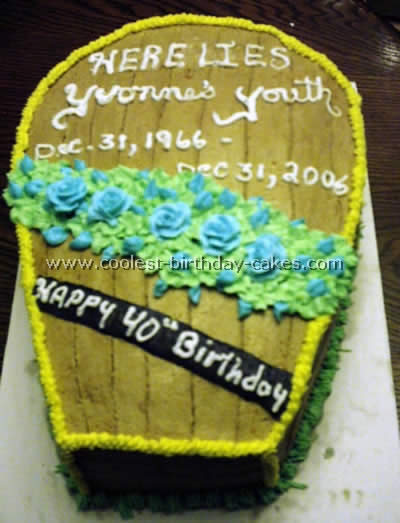 This graveyard cake is a half sheet cake cut in half, stacked then frozen. I then carved it in to a coffin shape, frosted and decorated it to look like a coffin. Roses were made with buttercream frosting. 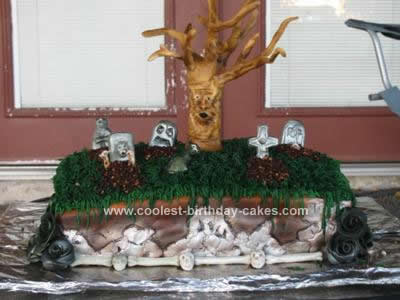 This Homemade Graveyard Birthday Cake Design was for my niece’s sweet 16 birthday. She wanted a grave yard cake. I made homemade marshmallow fondant to cover the cake. I made butter cream icing to decorate. I used gum paste and fondant combination to mold each piece by hand. The pieces were painted with an air … Read more 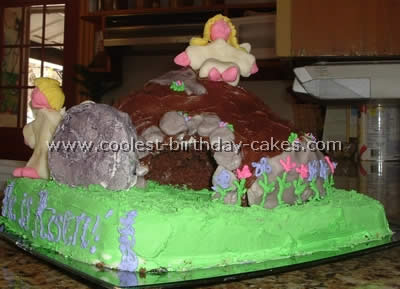 I wanted a cake that said Easter without a bunny so my daughter and I chose the empty tomb. It was surprisingly easy. I baked two cakes one in a 9×13 pan and one in a stoneware mixing bowl. I iced the bowl cake on top of the square one and carved out the opening … Read more 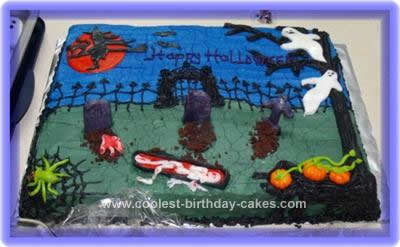 I baked this Homemade Halloween Graveyard Cake with a Graveyard theme for a Halloween Party. For the icing, I used homemade buttercream icing tinted dark blue for the sky part, then dark green (achieved by adding some black and green Wilton icing color for the actual grass part). I used my homemade marshmallow fondant and … Read more 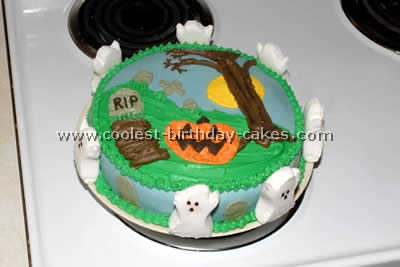 I made this graveyard cake from a box mix then used a marshmallow fondant for the blue background. I used home made buttercream & food colorings for the tree, grave, moon, pumpkin and grass. I used ghost “peeps” for the ghosts around the edges. 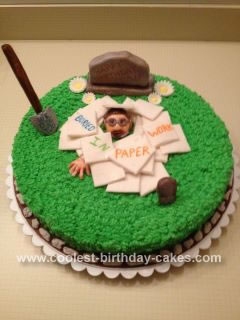 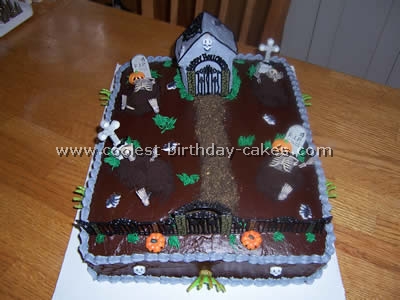 This graveyard cake is a 1/4 sheet cake for a friends Halloween birthday. I frosted it with store bought icing because it is creamier and easy to work with. I spooned a small amount out for each grave to make it look like a fresh grave and then covered that with crushed chocolate cookies. For … Read more 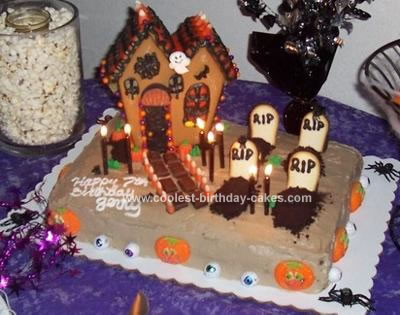 I made this graveyard cake for my nephew’s birthday which is in October. He was having a party with some friends and wanted a “cool & scary ” cake. I baked a chocolate cake and frosted it with homemade chocolate whipped icing. I then topped it off with a haunted house that I put together(from … Read more 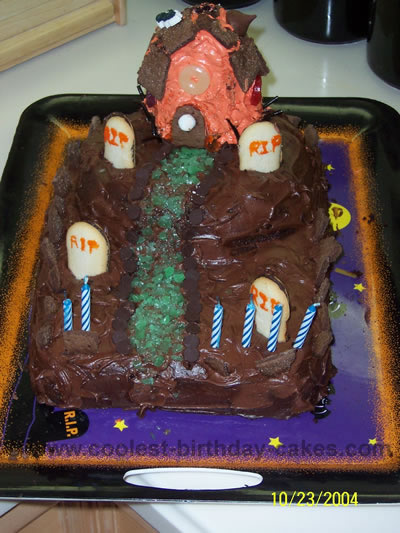 For this Graveyard cake I used 2 box mixes and store-bought frosting. It worked fine. I did follow the directions for decorating. You have to bake the cakes in a 13-by-9-by-2-inch pan, an 8-inch ovenproof bowl and a 6-inch loaf pan. Decorating the Graveyard cake: I used orange frosting, green gumdrops, chocolate graham crackers, chocolate … Read more 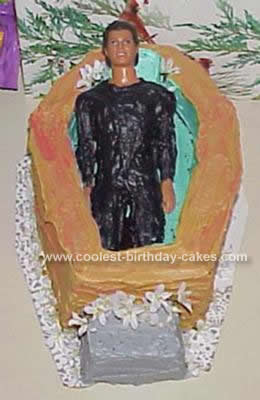 This Birthday Casket Cake I made for my uncle who was turning 45. Previously I had done an over the hill themed cake, so I wanted to do a one foot in the grave cake. That idea did not work out so well when I tried to find a way to get Ken to stand … Read more 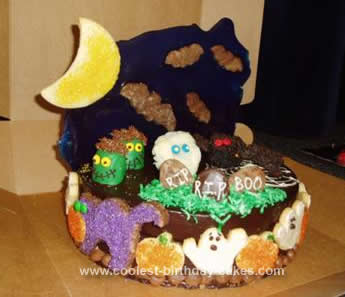 This Halloween Graveyard Cake is a chocolate cake with ganache frosting. The Frankenstein is made from marshmallows. The spider’s legs are pretzels and his body is a cake ball with chocolate sprinkles to resemble fur. The tombstones, cats, pumpkins, ghosts are all sugar cookie dough. The mummy is a mini cupcake. The moon and bats … Read more 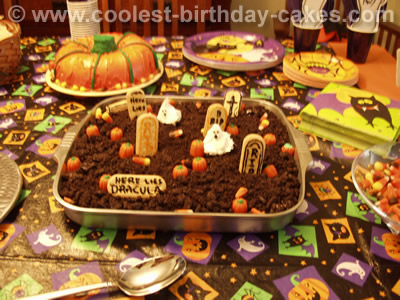 Here are two cake ideas I came up with for my daughters annual Halloween party – a pumpkin cake and a graveyard cake. The pumpkin cake is simply a yellow cake made in a bunt pan. I used white icing with yellow and red food coloring to make the orange. The stem is created with … Read more 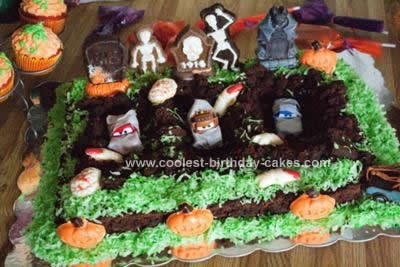 This Cars graveyard cake was a birthday cake for a 9 year old boy. He loves Cars and his birthday was on Halloween. So I combined them. The “grave yard” was made from brownie mix that was hallowed out. The Cars characters were pre-purchased and wrapped in paper tape and everything else was edible…colored coconut … Read more 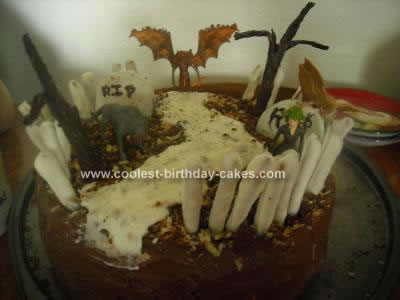 This homemade haunted graveyard cake was made out of two devils food chocolate cakes and I made a chocolate fudge frosting with coconut mixed in. I put a thin layer between the cake then coated the cake with it. To create the dirt on top I used toasted coconut, crushed almonds, and crushed thin mint … Read more 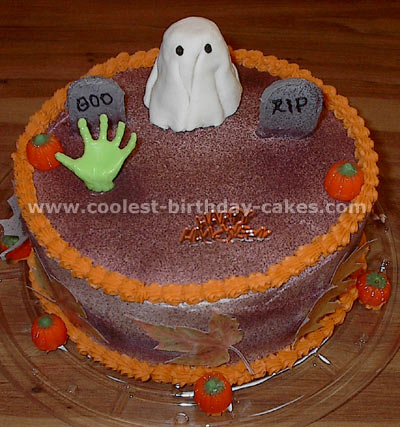 This is a two layer 8″ round spice Graveyard cake with cream cheese frosting which was airbrushed black/brown. The tombstones are Vienna Fingers cookies iced in gray, and the ghost is rice krispies treat covered with fondant. Edible rice paper leaves decorate the sides; and I added candy pumpkins all around. The hand’ and Happy … Read more 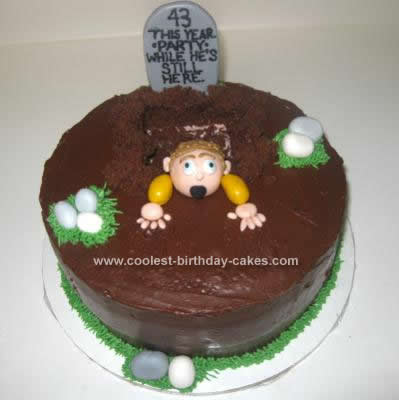 This cake is the result of a request for the theme “One foot in the grave.” My friend turned 43 this year, and I had no idea how to turn that into a cake. I found some ideas for a One Foot in the Grave Cake online, modified them, and came up with this. The … Read more 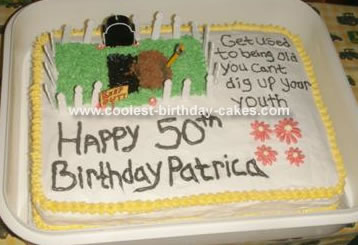 I made this graveyard cake for a friend’s mom. She was turning 50 and I came up with the idea for a grave symbolizing her youth. I looked for so many ideas on the net and got many ideas from many places including this site and threw it all together. I bought the fencing from … Read more 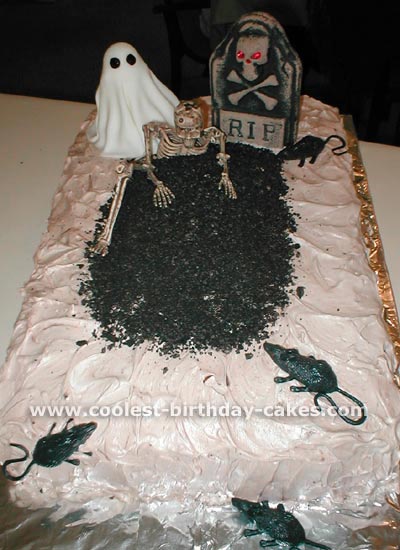 This Graveyard cake was made using two 9×13 pans. I used chocolate cake mixes. It had a filling that was a can of cherry pie filling mixed with one softened cream cheese. Once these ingredients are mixed, fold in a large container of Cool Whip and spread mixture between the two layers. The icing is … Read more