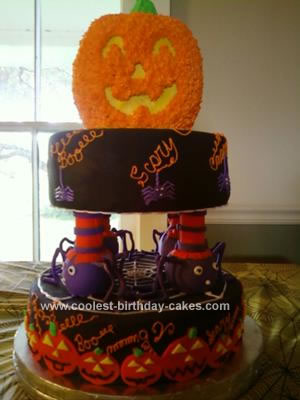 I did this Homemade Halloween Birthday Cake for a 6 year old having a Halloween theme birthday party. First time covering a whole cake in fondant. 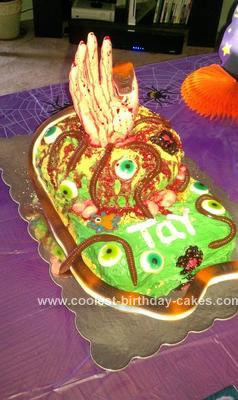 This is a Halloween cake I had made for my middle son, his birthday is in October. I used a regular sized cake pan and a bundt cake pan. I put the bundt cake on top of the regular size cake more towards either end of the cake. I frosted the entire cake with green … Read more 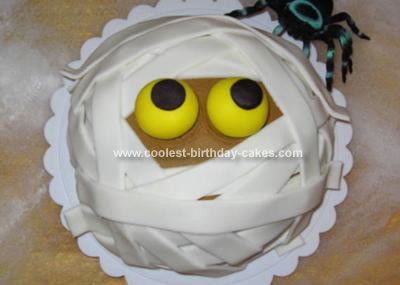 I used the Wilton Ball Cake for the mold of the face on this Homemade Mummy Cake. I used a chocolate frosting to cover the entire ball. I then used strips of white fondant and placed them in different areas and directions. The eyes were made using yellow and black fondant. 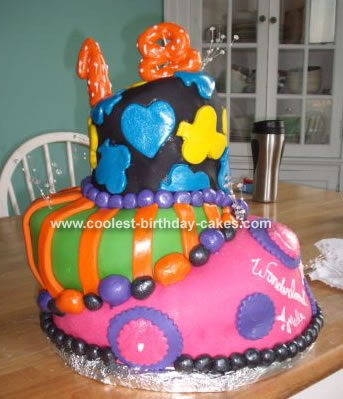 This Mad Hatter cake was made for my best friend who just turned 18. I was really excited to start this cake because it was my first time ever doing a cake this size and using fondant. However I think it turned out awsome and everyone loved it! I colored and flavored the fondant 3 … Read more 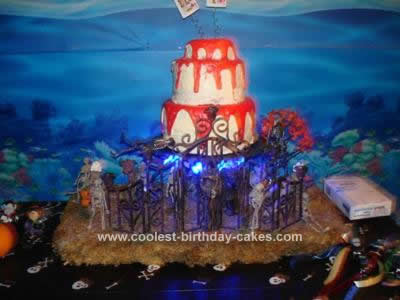 I make this Homemade Wedding Halloween Cake Idea for my wedding which was on Halloween. We were going to just have a Halloween party and decided at the last minute to get married. I wish I had a little bit more time to make the cake look perfect. It took me about 3 days to … Read more 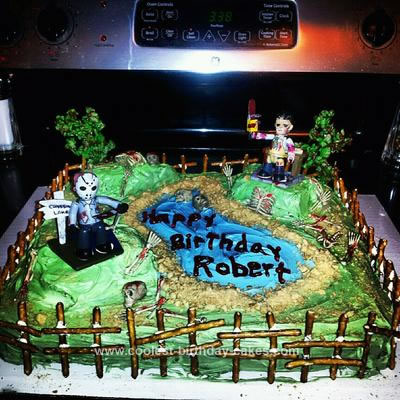 I made this Horror Movie birthday cake for my oldest son’s birthday. He loves scary movies so I decided to make him a horror movie cake. I used 2 chocolate cakes and put them side by side. I cut a 1 inch strip down along one side of each cake so that I could put … Read more 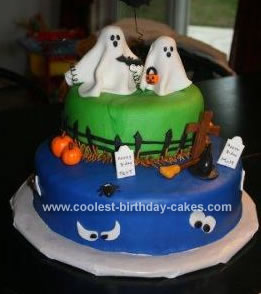 I made this Halloween Cake for my Mom and Troy (my brother in law) for their birthdays. It was Halloween time, so what a better cake to make then a “Halloween Theme” cake. This cake was fun to make. My sister made the cakes and of course rolled the fondant out for me, but after … Read more 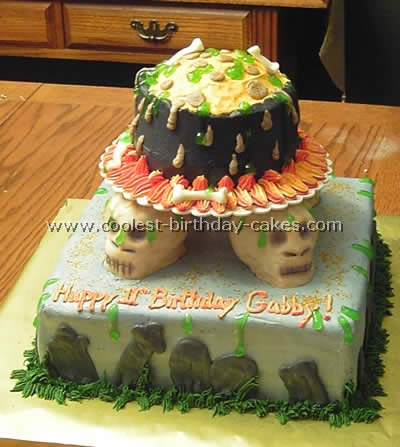 Most 11 year old girls want cakes that are flowery dainty and pink. Well this 11 year old wanted Halloween party cakes as her birthday was on Halloween. So I did a witchs cauldron on skeletons with a graveyard below. I started with a 12″ square double layer cake frosted in gray buttercream. Then using … Read more 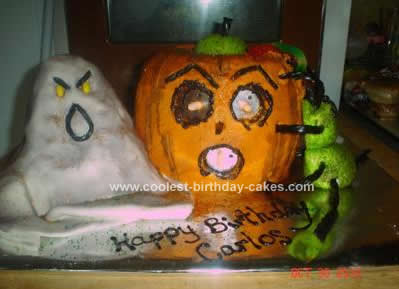 Every year I make a Halloween Birthday cake for my son. Last year was a 3D zombie. This year he couldn’t make up his mind so I combined a few Halloween basics and put them all together! I baked 2 cakes in bundt pans and stacked them on top of each other to make the … Read more 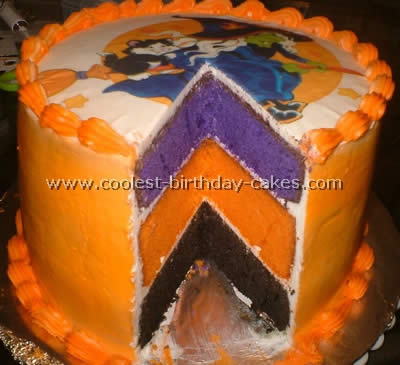 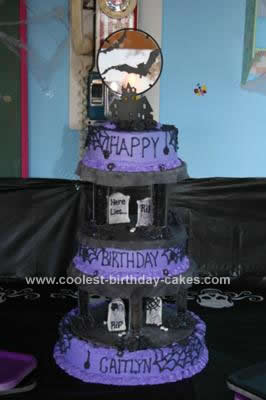 I created this Halloween Birthday Cake using 12″, 8″ and 6″ round pans. It was designed for my grand-daughters 12th birthday party. I used dividers with poles that I stuffed with black ribbon. I used rolled fondant colored black to cover the divider plates. For the top and middle plates, I let the fondant hang … Read more 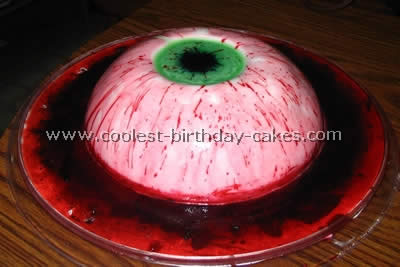 I used a soccer ball cake pan for this Halloween cake. After the cake cools cut out a hole in the top of the cake. Try to make the hole as perfectly round as possible. Cover the cake in white fondant icing making sure that the icing goes smoothly down into the hole and over … Read more 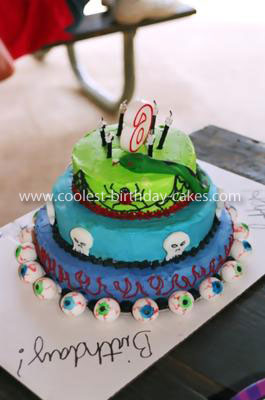 My son was turning six and was at the stage where all things gross, creepy, crawly and slimy are really cool. So we made him a Homemade Snakes Skulls and Spiders Birthday Cake! We called it the “tattoo” cake because that is what it reminded us of. For fun, we put food coloring in the … Read more 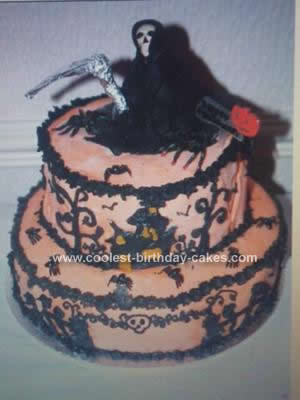 I made this Halloween Cake Idea for Halloween 2009, it went down a treat so I thought I’d share the idea with everyone. First I made 2 plain Victoria sponges, one 12″ and one 8″ rounds, (when they are both mixed up I used a tiny drop of red food colouring and swirled it into … Read more 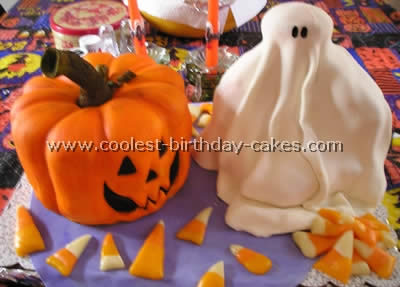 I made this Halloween cake for Halloween. I started with making three round pound cakes. I put them together and frosted them in middle then I placed them in freezer to get hard.Once I was done I painted orange colors using color gel in the creases and used Wilton color spray (orange) to color pumpkin. … Read more 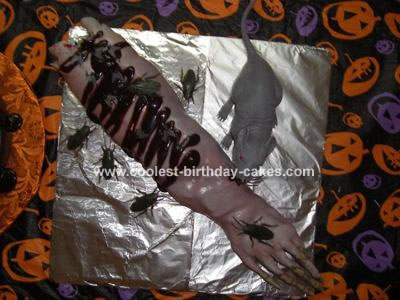 I made this severed arm cake for a Halloween celebration this year. I started off with rolling two ivory fondant tubes filled with red food dyed chocolate icing for marrow and refrigerated until they were solid. Next, I took angel food cake and raspberry filling and sculpted the arm. I covered the arm with rolled … Read more 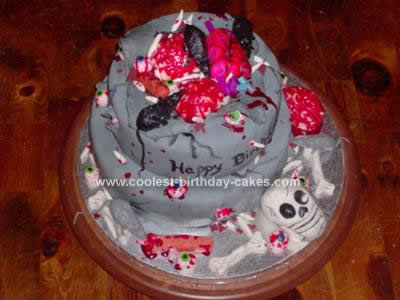 This gross Halloween Cake Design was made for my 13 year old cousin who wanted a Halloween themed party for his birthday. The cake is chocolate with a chocolate buttercream and then covered with fondant. I really had a lot of fun making the parts for this cake. Everything on this cake is edible except … Read more 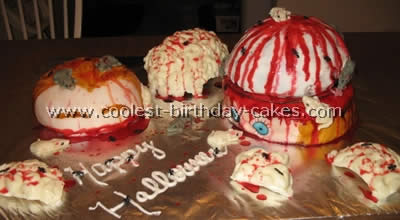 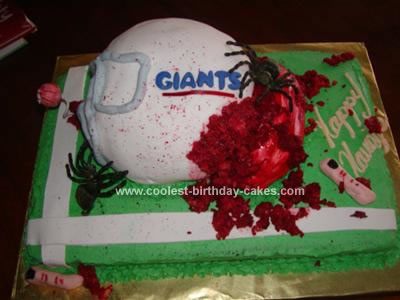 This oozing brain cake was made for a Pee-Wee Giant’s football team. It was for a Halloween party. The foot-ball field was a made out of chocolate in a 12x18x2in pan. Next, I made 2 more chocolate cakes using a 3D soccer mold. I froze them then I carved it to take shape like a … Read more 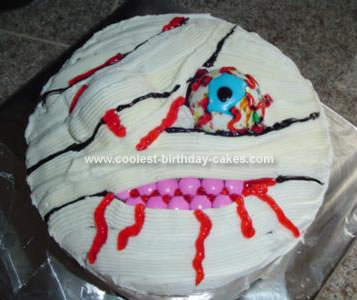 Traditionally for Halloween, but my son loves scary things, so he requested a Mummy birthday cake for his birthday. This is a double layer 9in round cake (easy) with decorations. I carved out a bit to hold the huge Okey-Dokey gumball (bulk barn) eyeballs, and did ribbon piping for the “wrapping”. Smarties for teeth and … Read more 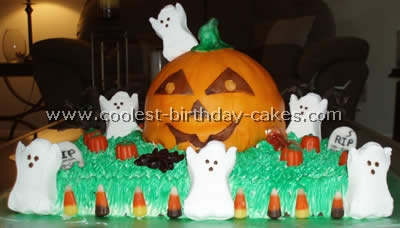 It was my fiancés sisters birthday and we wanted to bake a Halloween cake because her birthday was around Halloween time. we figured that we would attempt to make it a pumpkin cake. We tried it and I think it came out great. It was a carrot cake so it was a little difficult to … Read more 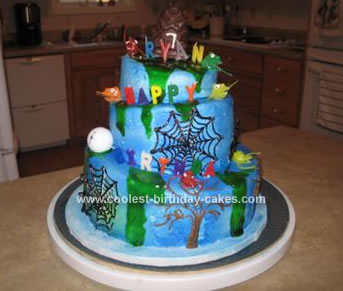 Since my grandson was having his birthday party in a place called Monster Golf, I decided to make a topsy turvy cake with a monster-theme design. I made layer cakes, stacked them up and then decorated them with buttercream icing. The cake was finally airbrushed with the colors and I was satisfied with the results. … Read more 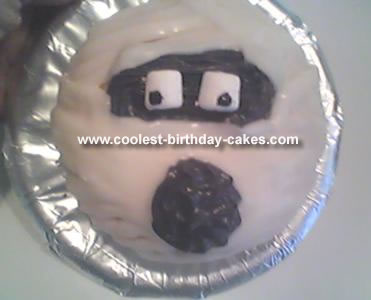 I used the round pan for this mummy cake. I made the mix from Duncan Hines and once cooled I frosted the sides. I filled in the area in black icing and placed mini marshmallows in for the eyes and mouth then with the leaf tip I did the strips across the face. It took … Read more 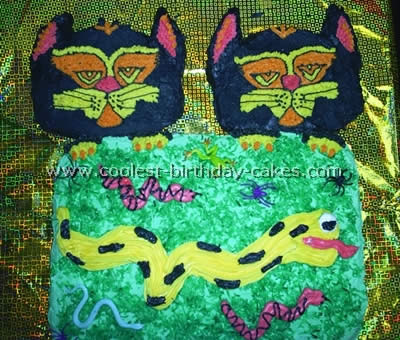 I made this Halloween cake for my boys. I made a traditional vanilla cake from Joy of Cooking cookbook and classic buttercream frosting. The cats were made out of circular cake pans and I just used cake corners for their ears. I got the cat faces from some Halloween Decorations with a little of my … Read more