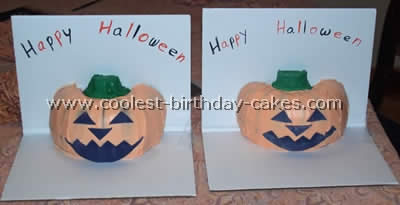 These cakes are for my daughters two different classrooms at school. They are two bundt cakes (one upside down on the bottom and then the other on top) to make the pumpkin and then a cupcake for the stem. I used a box mix for the cakes and just stole some of the batter to … Read more 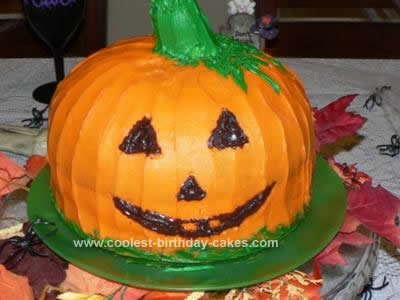 I made this Halloween Pumpkin Cake Design for the first ever Halloween costume party I hosted. It tasted good and everybody loved it. I used 2 French vanilla cake mixes and cream cheese icing. I baked using 2 Pyrex bowls. For the pumpkin, I used Wilton orange color and green for the leaves, vines and … Read more 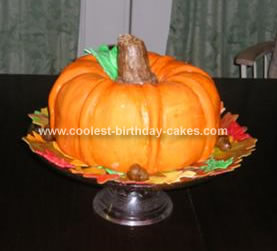 My sister and her husband were coming down to visit for Thanksgiving. So, I decided that I would make a Pumpkin Cake for the season. I used two pumpkin spice cake mixes and made two bundt cakes. After they had cooled, I had poured spiced rum over each cake. Then I iced them and put … Read more 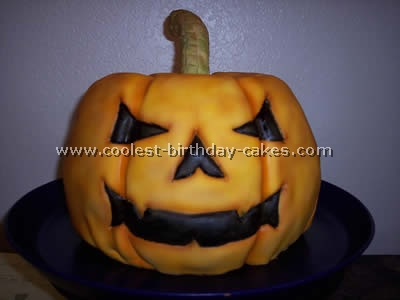 This pumpkin cake won me first place in a cake competition. The cake itself is a pumpkin spice cake from a recipe I found online and it used the accompanying pumpkin cream cheese frosting. It is made up of 3 10in round layers about 2 inches tall. Each layer was cut in half and frosted. … Read more 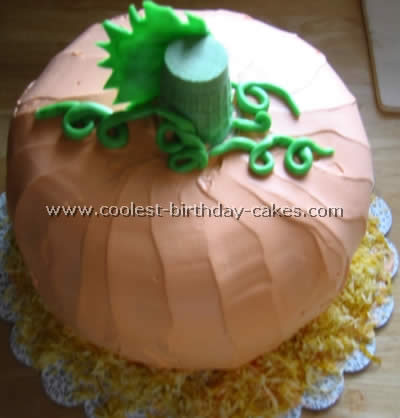 First of all I want to thank you for this great site. I took this idea from here for pumpkin cakes. I just baked two boxes of vanilla mix in two bundt pans and put some frosting in between and frosted with pastry pride tinted in orange. The steam is a green cone. For the … Read more 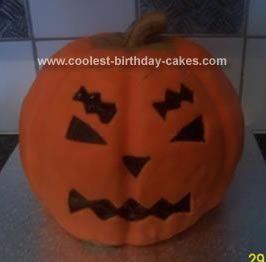 This Pumpkin Cake is a chocolate wedding cake I did for a close friend of mine. Firstly I cooked 6 round cakes and stacked them up, filled in between each one with thick choc butter cream then carved the cake into a pumpkin shape. When covering with icing I pushed it up to give the … Read more 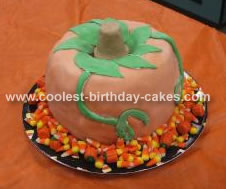 This was my first attempt at making a fondant cake. Next time I do a cake in fondant, I will try something less ambitious. I made 2 pumpkin spice bundt cakes and inverted one on top of the other. I did a crumb coat in buttercream frosting and then laid on the layer of orange … Read more 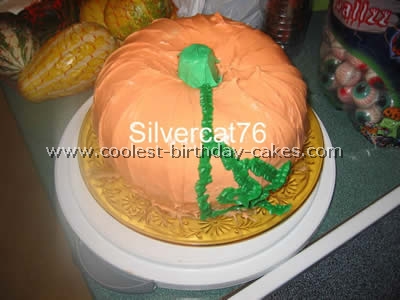 I got my idea because as a family tradition we get together every year to go pumpkin picking and than back to carve them out. I wanted to make a pumpkin cake to take a dessert so I searched it out on the net and asked a baking friend what ideas she had for me. … Read more 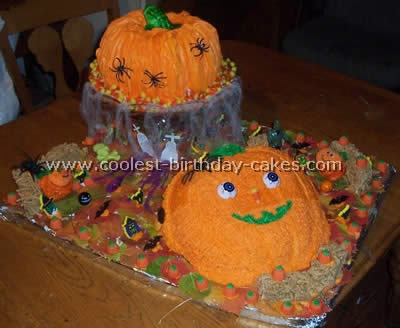 I made this cake for my sister in-law for a Halloween party at work in an adult foster home. The great pumpkin, the biggest one, I used two chocolate bunt cake pans. The frosting is buttercream I made. For the hay bales I used peanut butter chips and La Choy noodles. Melt the peanut butter … Read more 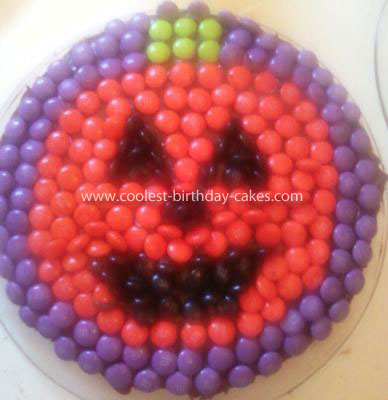 This Halloween Cake Jack O Lantern was a 9″ cake. I used box mix. Frosted it with chocolate frosting and then got a bag of M&M’s the Holiday special ones and decorated it like a Jack o Lantern. How I created the face was by playing around with the M&M’s on a plate first. It’s … Read more 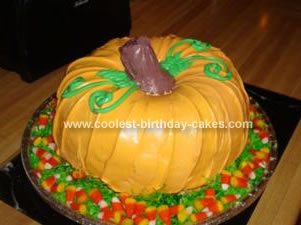 I made two butter pecan bundt cakes for this pumpkin cake. Then evened them out and placed them one top down then filled with butter cream icing and placed the other top side up. I then put a crumb coat on and placed in the fridge for a couple of hours. I took back out … Read more 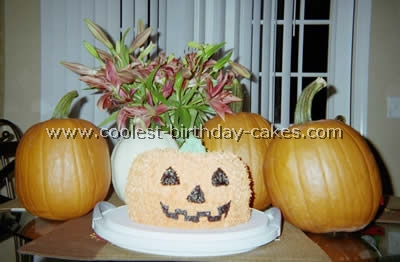 I made this pumpkin cake for Halloween. I used: 2- Reg. Box cake mix, Orange, black, and green coloring, Wilton buttercream icing, and a Bunt cake pan. I baked 2 bunt cakes. I cut the top off of both. I put the first bunt cake upside down. I put vanilla pudding in the middle and … Read more