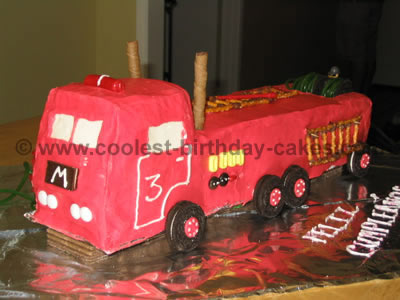 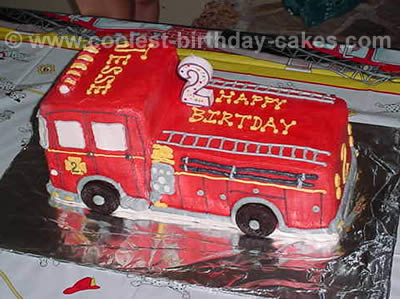 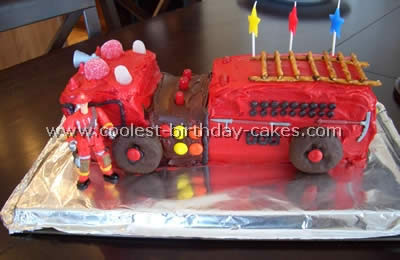 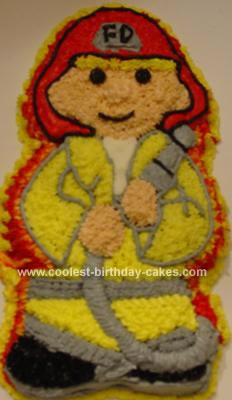 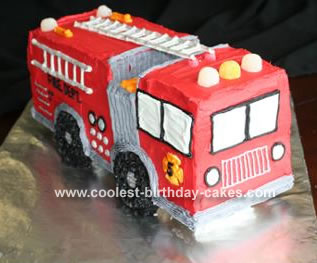 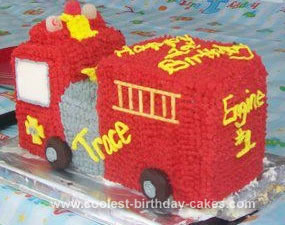 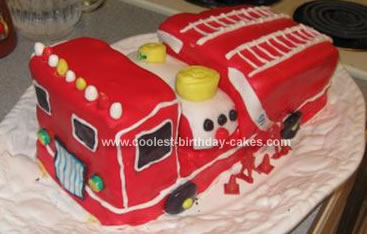 This Fire Truck Birthday Cake is my second cake I ever made, this I made for my son’s 3rd Birthday, as he loves fire truck’s and all other trucks. After I made my daisy cake I got inspired and thought I should make a cake similar to the daisy one for my son, also so … Read more 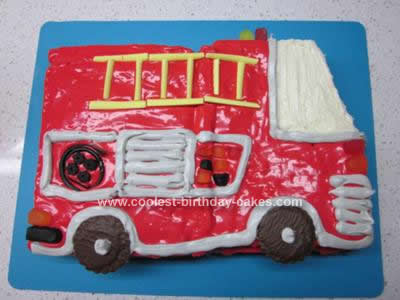 At first I had to look online to get some tips for a Fire Engine Birthday Cake, I found the Betty Crocker website to be very helpful in terms of how to spread icing on easily and without too much mess (especially when working with red icing!). I made 3 rectangular sized tins of vanilla … Read more 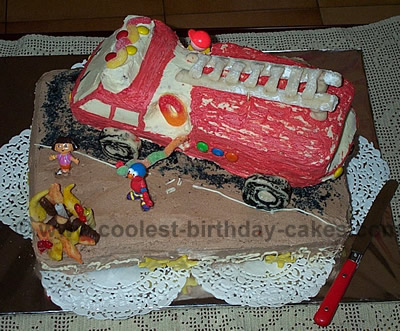 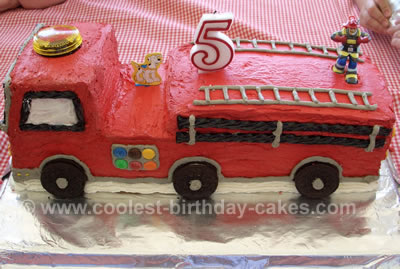 My son (5 years old) wanted a Rescue Hero birthday party so we started off with a firetruck cake. I got several kids cakes ideas from this website as well as others and sort of used a little bit of each of them. I made two sheet cakes (15 x 10 x 1; one chocolate … Read more 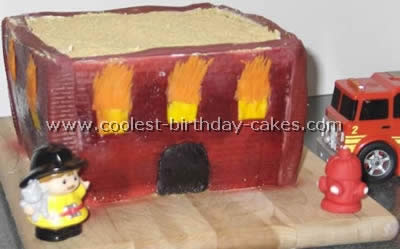 We had our sons birthday at a fire station and I decided I wanted something different. I decided to make a building on fire instead. The cake is a four-layer cake with butter cream icing (the size depends on the number of guests). I used colored fondant for the walls, door, windows and fire and … Read more 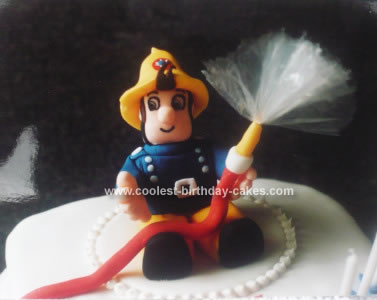 This is a fireman cake I made for my son’s 3rd birthday. I had already made him a Postman Pat cake for his 2nd Birthday, and decided I liked making character models. As he loved Fireman Sam by then, I rose to the challenge! I divided the sugar paste into small pieces and mixed in … Read more 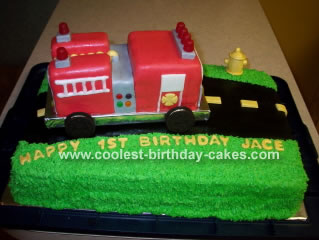 This firetruck cake was made on a double layer sheet cake. I then frosted the road with premade black frosting, which I don’t suggest using unless first softened in the microwave. I then cut small strips of yellow marshmallow fondant to make the stripes on the road. The grass was done with the Wilton grass/hair … Read more 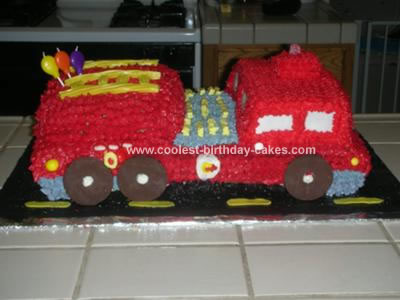 The general theme for this Fire Engine cake came from the invitations to a co-worker’s son’s third birthday party. We started by making three funfetti cakes. Two cakes were used to make the 9″ x 9″ sq cakes that make up the body of the fire engine, one loaf cake was used to make the … Read more 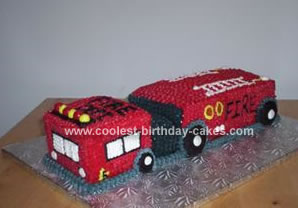 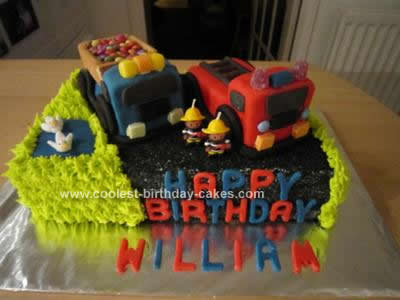 Another Firetruck Cake that requires no baking! The base is made from three Asda Madeira slab cakes glued together with jam. The covering is ready made butter icing coloured green and piped on with a star tip, the road is a thin layer of black sugar sprinkled over buttercream. I made the duck pond using … Read more 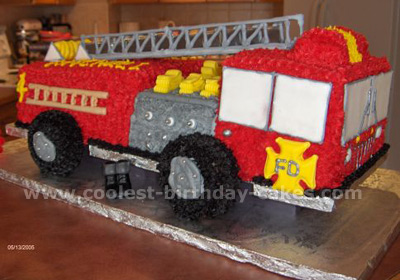 I purchased a Kit from EBay to help me with the dimensions and design. The cake itself was made from a 12×18 slab cake cut into sections to form the truck. For these kinds of kids cakes it is good to take a few weeks in advance during which I made Royal icing decorations and … Read more 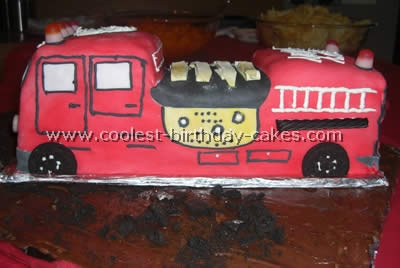 I used an 11×15 cake pan and filled it with two cake mixes and baked until the tooth pick came out clean! Then I froze the cake to make shaping it easier. Once the cakes were frozen I cut them length wise and then made two exact match rectangles (approx. 5×14). I cut off the … Read more 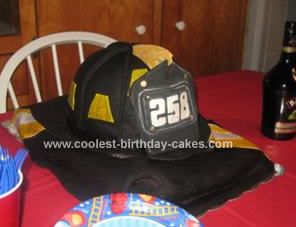 This FDNY helmet cake was made for my husband’s birthday/end of 1st year probation with the FDNY. The base is a sheet cake covered in fondant to resemble his bunker coat and the helmet is a close replica of his actual gear. The domed portion of the helmet was made from four layers (one 10″ … Read more 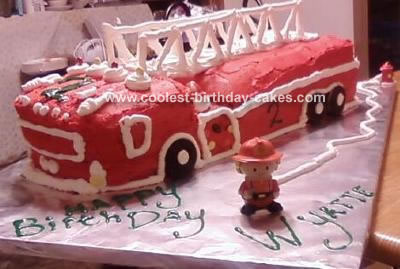 My son loves fire trucks so for his 2nd birthday I decided to make a fire truck cake. First of all it was a lot of work. I wanted to quit several times but it turned out good glade, I stuck with it. I made a sample one a month before just to see if … Read more 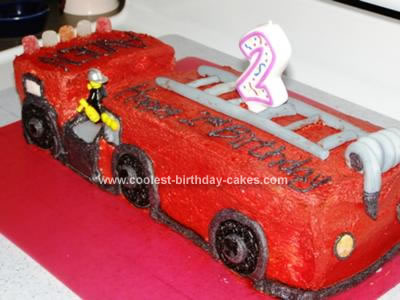 This Firetruck birthday cake was made using two large loaf pans and three small ones. The two large cakes were stacked to form the back of the truck. One small cake became the middle and two others were stacked to make the truck’s cab. I used buttercream, tinted with 1 1/2 jars of red icing, … Read more 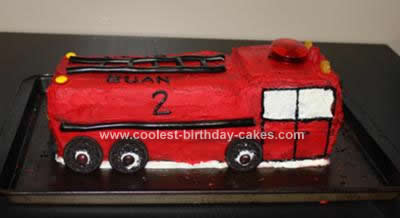 I wanted to make a cake that would be recognized and enjoyed by two 2 year old boys, one from Canada and one from Holland, and decided on a fire engine. I looked at many examples from various websites and took ideas from most of them. The only thing I did that I didn’t see … Read more 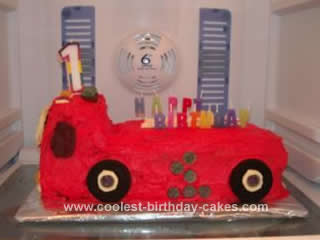 This is a Fire Engine Birthday Cake I made for my son’s first birthday. He really loved it and it was a huge hit and really quite simple to make. I had never made a themed cake before but I’m happy with how it came out! I made it by baking two pound Madeira cakes … Read more