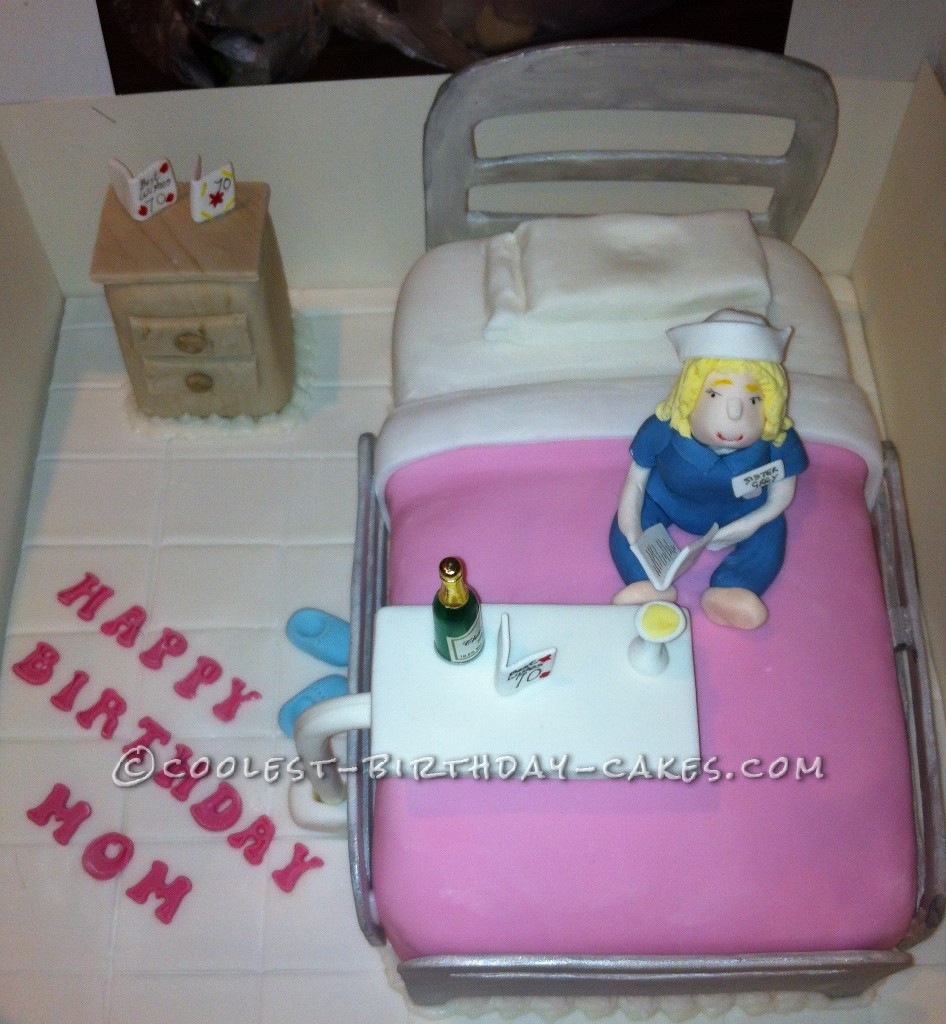 My sister in law’s friend wanted a hospital bed cake with a nurse sitting on it for a relations 70th birthday. I agreed to make it for her as I hadn’t made one like this before and this would be a challenge for me and I love a challenges. I worked out how big the bed … Read more 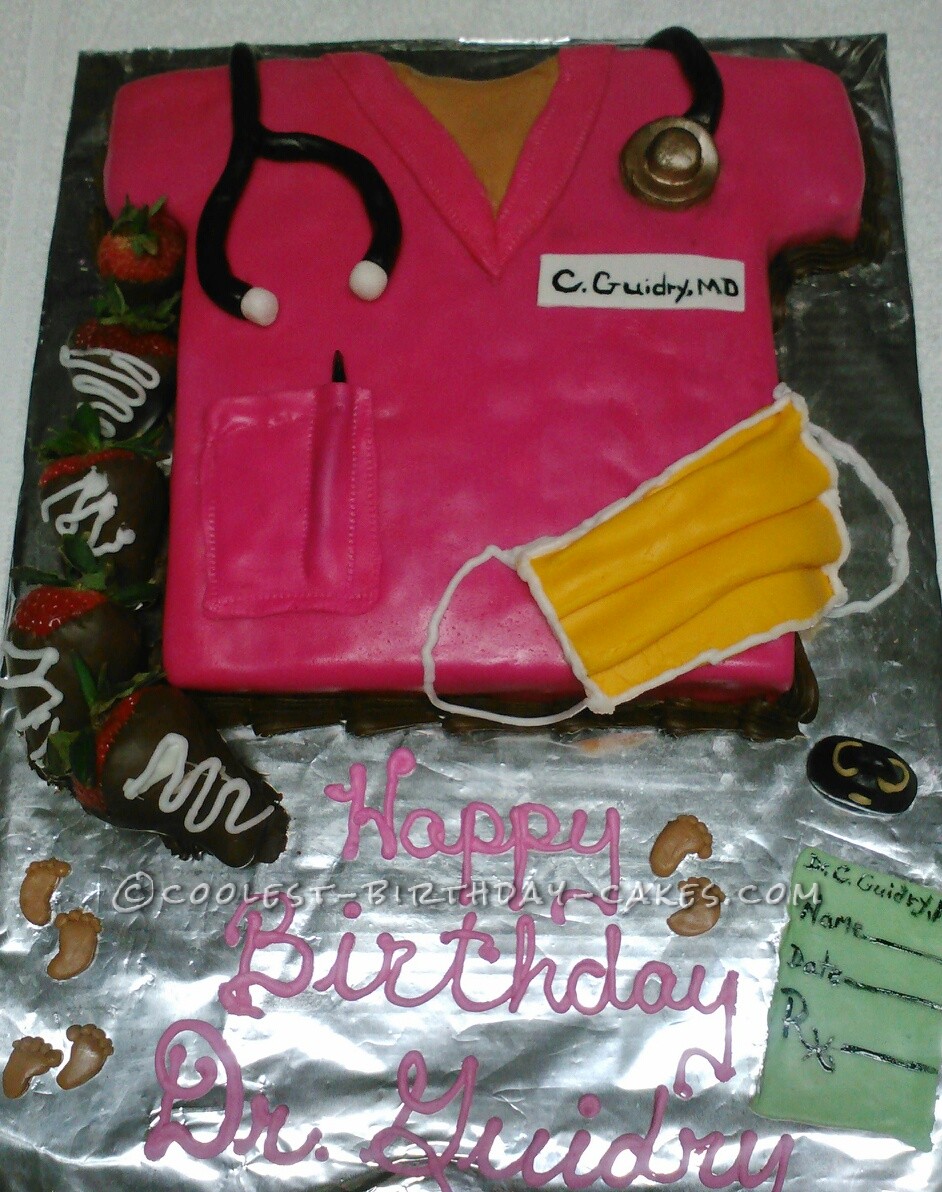 My daughter asked me to make a birthday cake for her obstetrician.  I made a 9×13 chocolate cake, carved the cake to make it look it like a scrub shirt. The cake was frosted with a raspberry milk chocolate butter cream frosting. I made a strawberry white chocolate marshmallow fondant to cover the cake. Pink is the Dr’s favorite … Read more 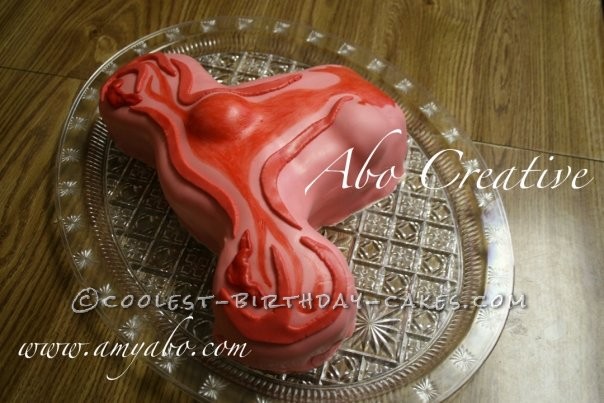 Has anyone you’ve known suffered from Fibroid pain? They are basically lumps in your uterus that are very painful and have to be surgically removed. So what better way to make a person suffering from Fibroid Pain feel better than make a uterus cake! Complete with fibroids, this friend of ours had two very large … Read more 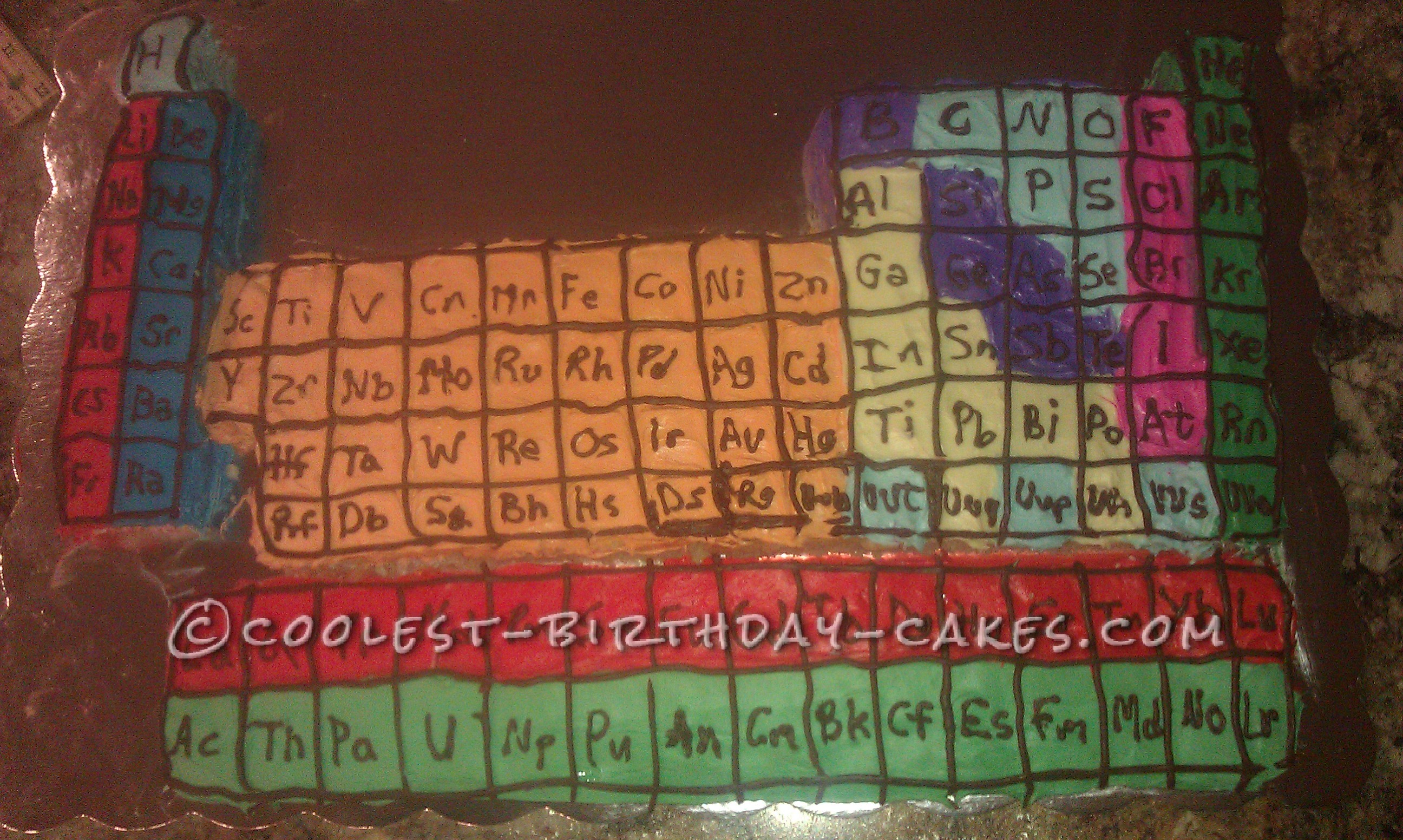 My son had a science-themed party. This was so much fun. He wanted a cake of the periodic table of elements. I originally was going to do cupcakes of each element and form them to represent the table and still may try this just yet, but he was only having about 8 friends to his … Read more 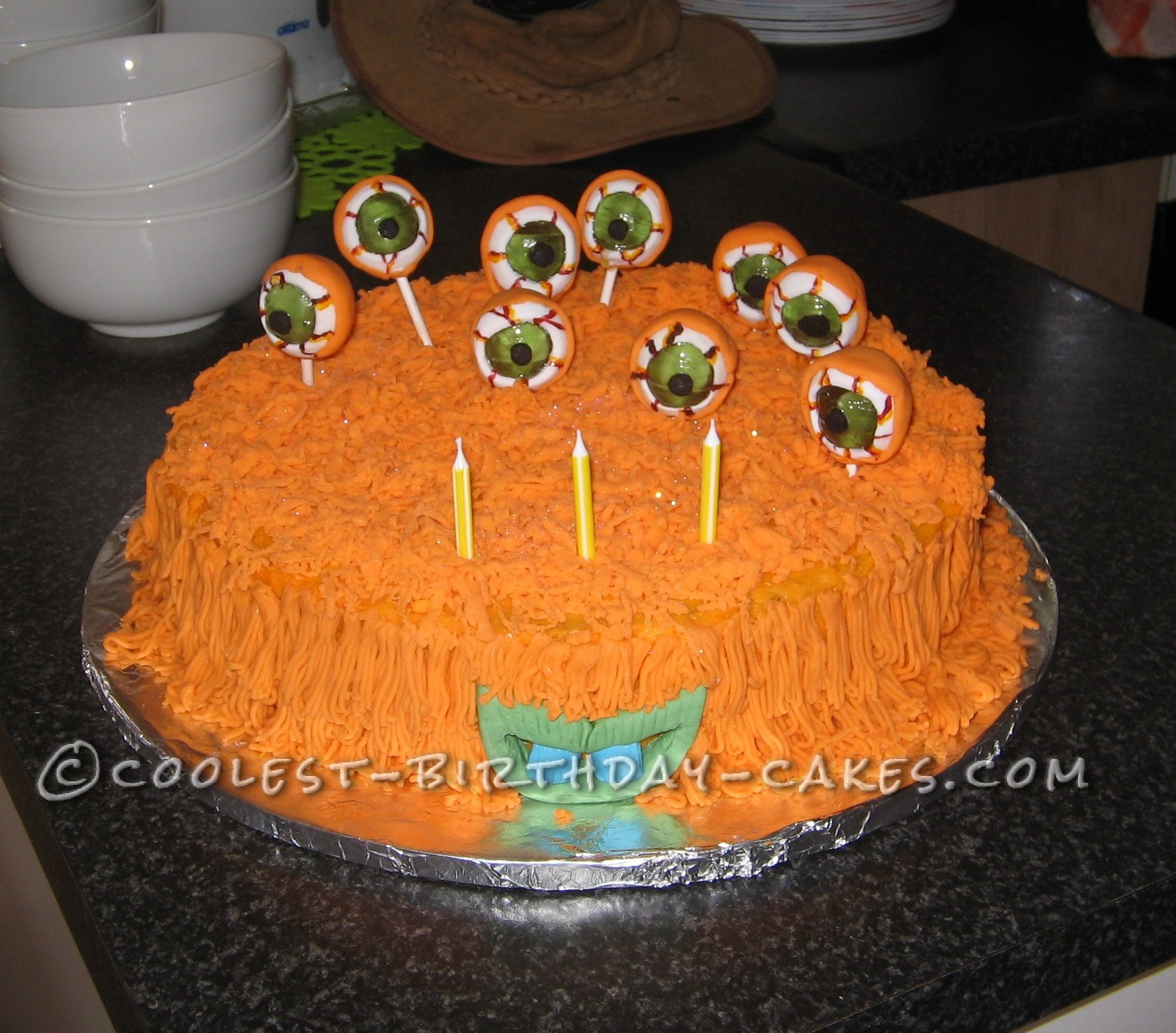 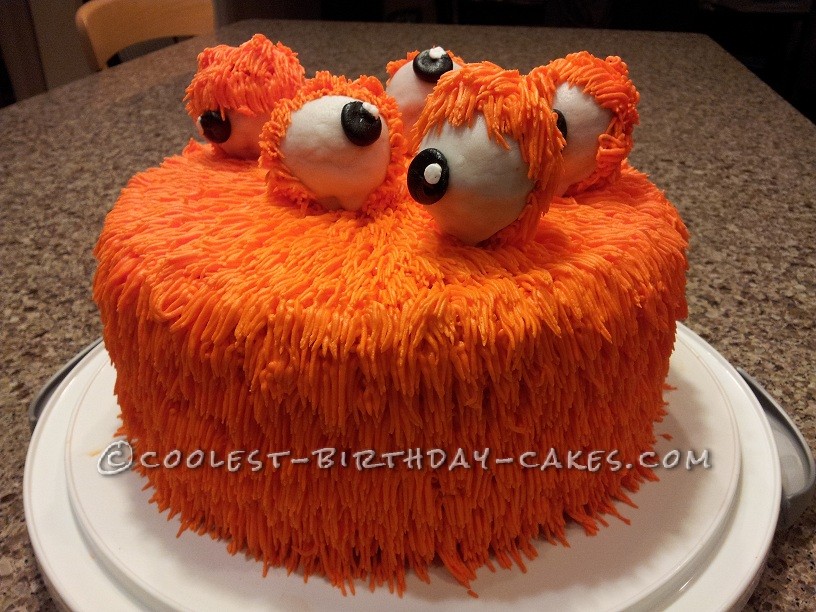 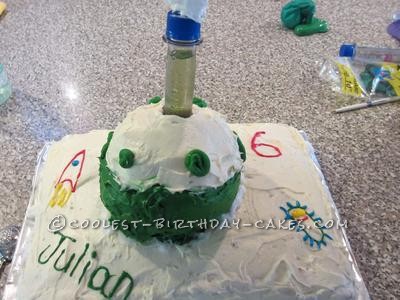 I never turn out professional looking cakes, but I aim for fun. My son, turning 6, wanted a mad science birthday party. I saw a few ideas online, but thought a lot were over his head (and perhaps my abilities). So, I went with a simple cake plan, and added some pizzas with an experiment ON the cake… … Read more 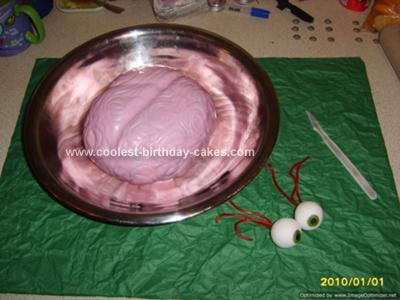 This Brain Cake was the inspiration of my wife, we were going to do a Lego cake but this was much more fun, The cake itself is a normal sponge cake coloured with red food colouring so that when we cut it open it will be red inside too, It was baked in a Pyrex … Read more 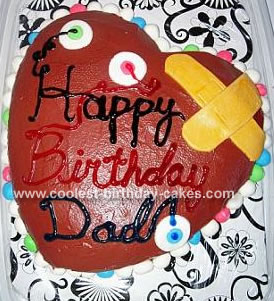 After some troubling recent bouts of arrythmia, my Dad, who has an oddball sense of humor, requested a birthday cake that would reflect his recent difficulties (including two hospitalizations, a host of EKGs and catheterizations, and the installation of a pacemaker and defibrillator). So, for this cardiac cake I made a one-layer white cake using … Read more 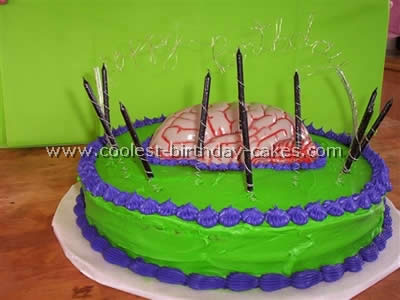 My son was having a Mad Science Birthday party and I wanted to make a Brain cake that really went along with the theme. I started by baking two 14″ wide 3″ deep round layers of red velvet cake. After cooling I leveled them and put them together with a layer of the lime green … Read more 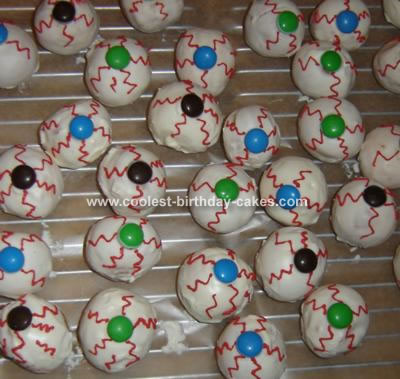 I saw these eye cakes in a magazine and thought I should try it. So easy and really fun! Using unglazed donut holes (holds frosting really well) and M&Ms these are great for a Halloween party. After looking at the grocery stores for weeks I was unable to find unglazed donut holes. So I went … Read more 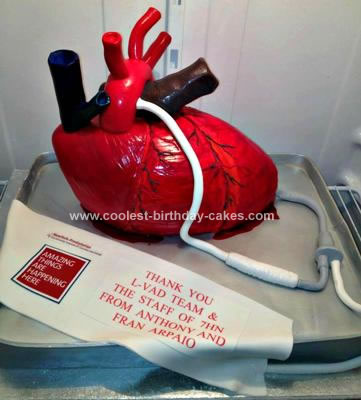 I made this Human Heart Cake for my oldest brother, he is currently on the heart transplant list in New York. He recently had a procedure done, they had to install whats called an LVAD unit, it assists the flow of blood thru the left side of his heart. This should help him until a … Read more