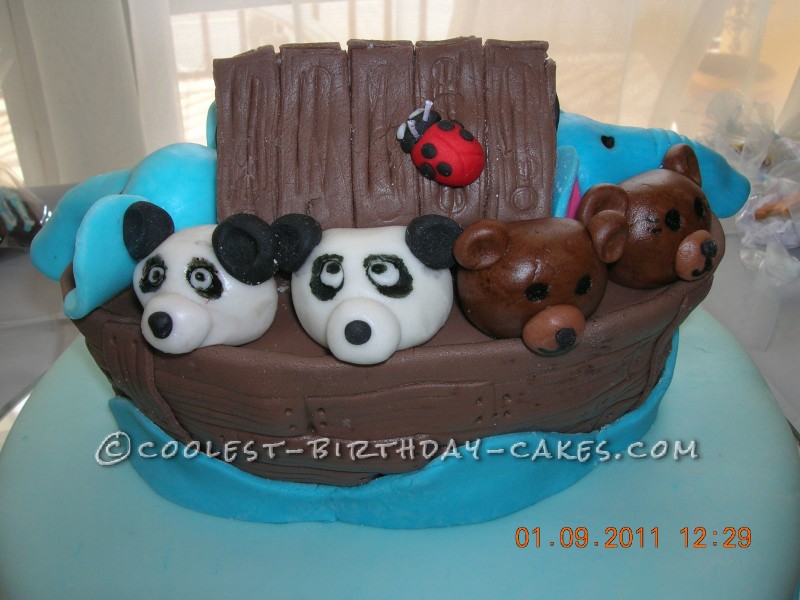 I made this Noah’s Ark cake for my nephew’s Baptism.  This was my first time modeling animals (or anything, for that matter), so everything that could go wrong, went wrong! First of all, I did the whole cake, decorations and all, the night before.  It came out OK, so I guess it was beginner’s luck!  … Read more 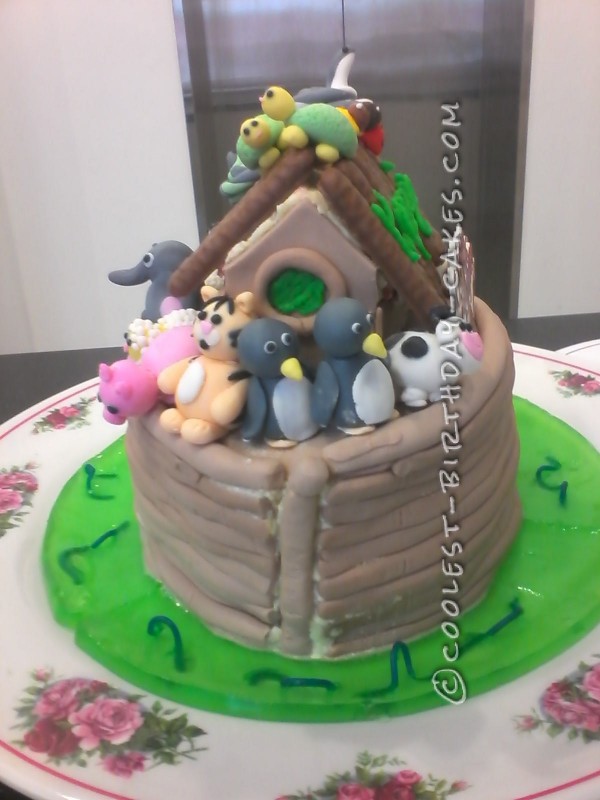 I planned to make this Noah’s Ark cake for my little girl who was turning 3, months ahead of her birthday. And since I am a working mum, I started to make the fondant animals one month before the birthday party was to be held and kept them in an airtight Tupperware. As the days … Read more 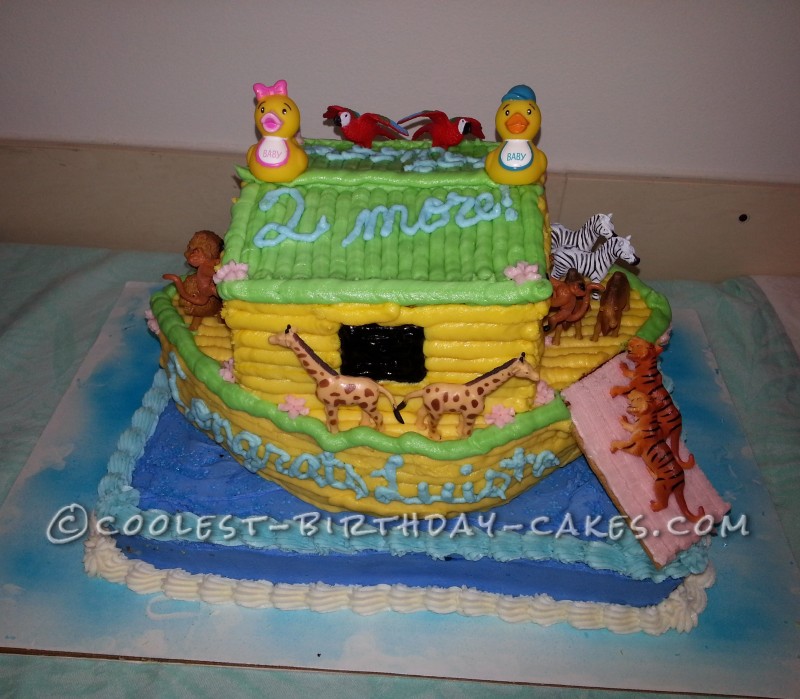 This Noah’s Ark baby shower cake was 5 layers, and took 4 cake mixes, so I mixed and matched flavors just for fun. The bottom layer is just a normal 9×13. The next 2 layers I baked as 9×13, but then carved into a sort of “football” shape for the base of the ark. I … Read more 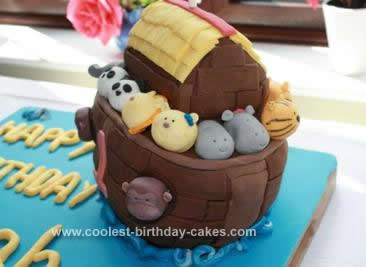 I made this Homemade Noah’s Ark Cake for my son Noah’s first birthday. I did lots of research for this cake as I wanted it to be perfect, and all in all it took a few days to finish! I baked a large Madeira sponge in a roasting tin then cut two ovals, one smaller … Read more 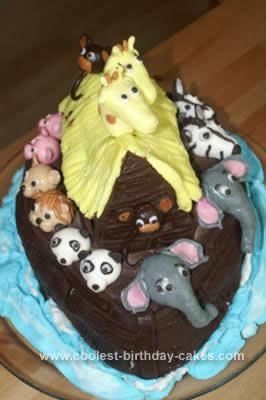 I made this Homemade Noah’s Ark Birthday Cake for my son’s birthday. I made the “boat” using a round cake and cut the sides with a knife. The top was made from honey graham crackers and the leftovers from the cake. All the animals I made from marshmallow fondant colored with the desired colors. I … Read more 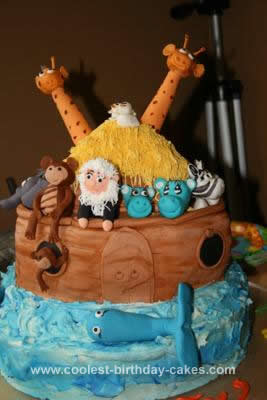 Our little boy’s FIRST birthday. I knew it had to be special!! So I started out baking this Homemade Naoh’s Ark Birthday Cake. I made a 10″, 8″ and 6″ vanilla bean cake, filled them with a pineapple filling with just a little coconut flavor added. Then I began carving. I “stacked” the 8″ and … Read more 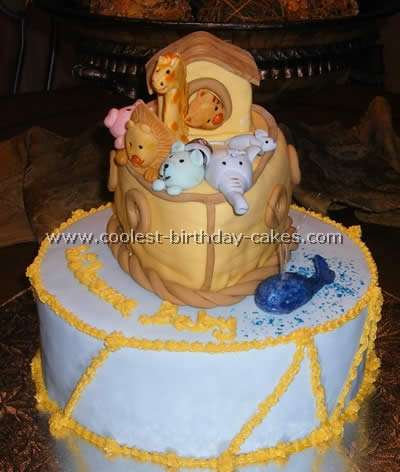 I made the cake for the daughter of one of my co-workers baby shower. It was a yellow cake with a combination of flavors. it was delicious and beautiful. The Noah’s Ark (on top of the cake) was a small shaped cake. I covered the whole cake with rolled fondant. I made the animal faces … Read more 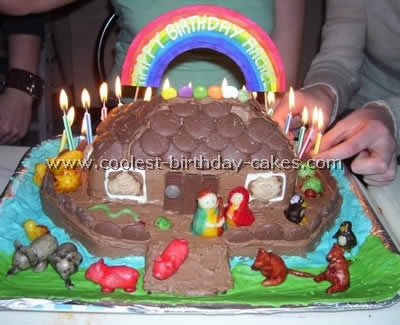 I made this for a friends 19th birthday. You’re never too old for child birthday cakes! Pretty self explanatory really, made base in flat roasting tin then shaped ends, central part is loaf cake with sides shaped for roof. Small cutting of cake made the ramp. All covered in chocolate butter icing and sweets used … Read more 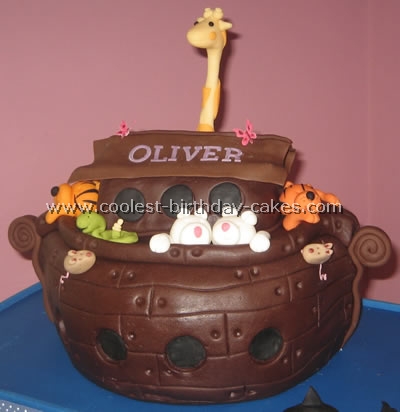 I made this cake using an oval tin and carved the sides with a knife. The top was a small rectangular cake. All the animals were made from sugar dough and the cake was covered in chocolate fondant. This is one of the many child birthday cakes that I make! 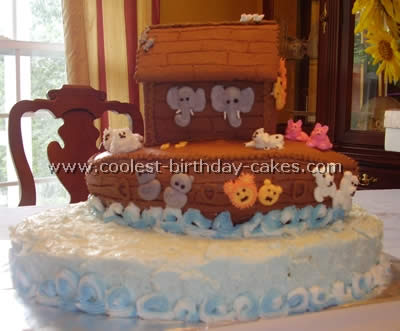 This cake was made for my twin nieces on their first birthday. I searched this site for child birthday cakes when I came across a Noah’s ark cake. The top of the ark is made of cookie and held together with royal icing. The animals were all made of royal icing. The boat of the … Read more 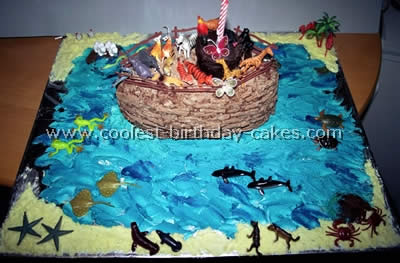 For my daughters second birthday I tried to think of child birthday cakes which are meaningful about two and came up with Noah’s Ark. The cake is two circle butter cakes joined with butter icing and cut into a boat shape. A chocolate muffin was placed on the stern and held into position by a … Read more 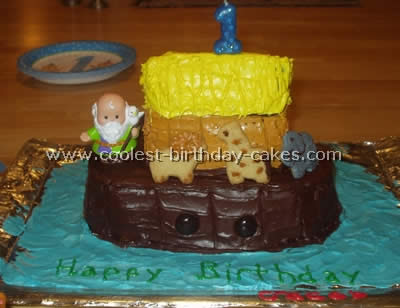 I love this cake! I made two cakes (one yellow and one devils food). I baked them in loaf pans and froze them. I tented the icings the colors I needed and then thawed the cakes about 80%. I cut off the corners of one cake for the base of the ark. I cut a … Read more 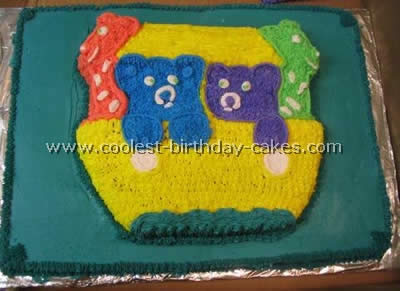 As you can see the background was just a smooth layer of butter cream icing. The ark and animals were butter cream star tips along with a round tip for the facial details and outlines. 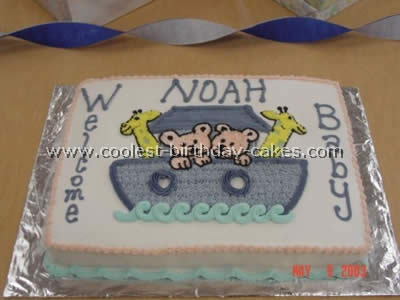 Fill in with the colors and detail and outline with black. I used different tips for dimension and detail. I prefer Duncan Hines’ cake mixes and with any flavor add 1 1/4c water, 3 eggs and 1 tablespoon of vegetable oil. When they come out of the oven and are still hot press the ‘hump’ … Read more 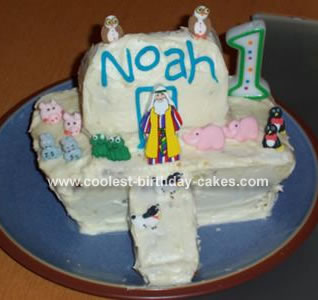 I made this Noah’s Ark cake for my son’s first birthday, his name is Noah, so it was an obvious choice! I made a lemon cake in a loaf tin and cut some pieces off the ends at about a 30 deg angle to form the main boat shape. I then used these pieces to … Read more 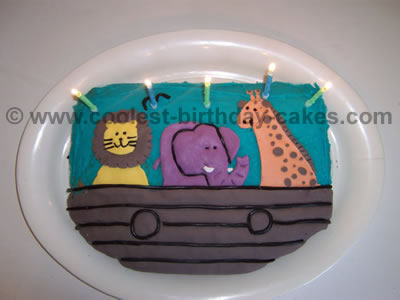 So we decided to make one of our own. Since my mom used to make the cake designs for our birthdays when we were little (a long time ago) she decided to do it again for her first grandson. We decided to create a giraffe, and, using a “Little People” giraffe model, this is what … Read more 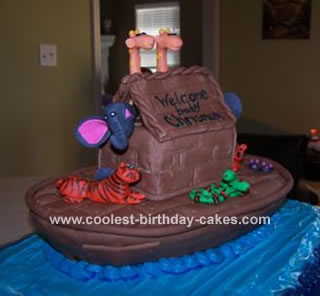 Okay so this Noah’s Ark cake turned out to be a little time consuming. I made the animals a couple of days in advance so they would dry out a little. All free hand and I used food coloring mixed with a little water for painting. The base cake was a sheet cake made out … Read more 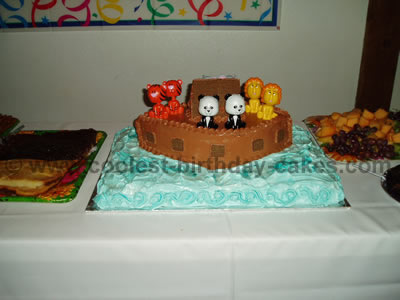 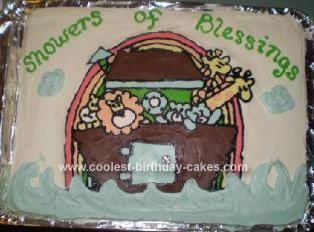 I used two box cake mixes for this Noah’s Ark cake and prepared according to the package directions in 9×13 pans. After the cakes cooled I put them side by side on a cookie sheet to make one large cake, trimmed off any uneveness, and put the cake in the freezer. After the cake was … Read more 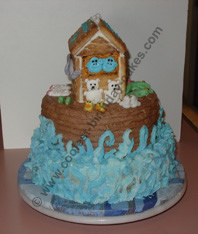 I iced and decorated a 9″ cake and stacked on top of it a 6″ cake iced with chocolate buttercream. Insert skewers into the cake to ensure that it stays stable. Stick precut cookies onto a square piece of cake with buttercream icing to form the house. With ready-to-roll fondant, color and shape into desired … Read more 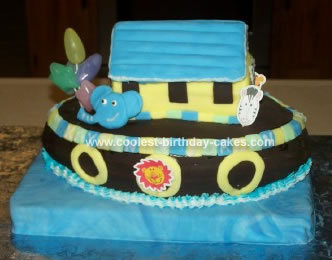 This Noahs Ark Cake was done for a baby shower. The base is a 9 x 13 vanilla cake, covered with buttercream then topped with fondant. I rolled white, pastel blue and primary blue together to get the look of water. The ark portion is a Wilton’s football shaped pan filled with vanilla cake. I … Read more 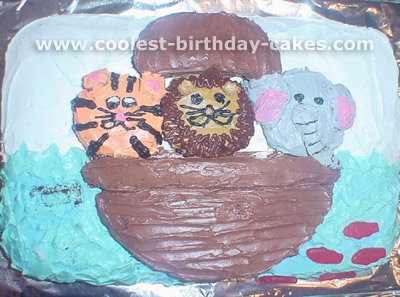 The round pan was cut in half and the bottom half became the boat and I cut the top half into two pieces. I stood the top rounded piece on edge to form the rim of the boat. I cut the other to form the top. I cut off the bottoms of the three cupcakes … Read more 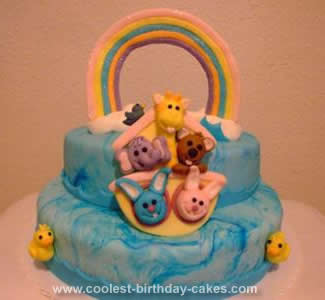 This Homemade Noah’s Arc Cake was inspired by a cake in the Wilton book. For the most part I followed book directions, but made a few changes. I used round cakes instead of oval, and also marbled the “water” blue instead of rolling out strips of multiple colored blue fondant. It was much easier and … Read more 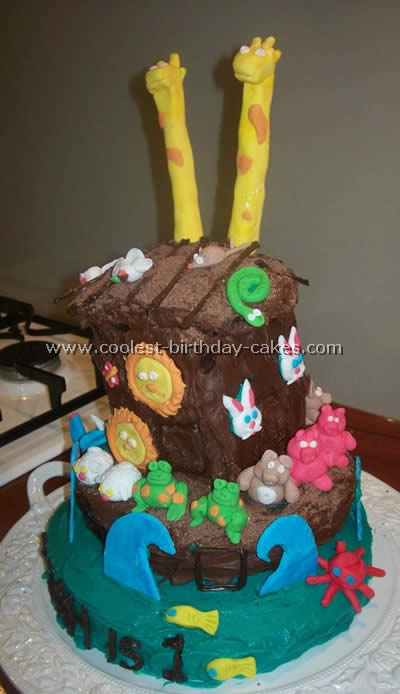 My sons name is Noah so for his first birthday I was inspired by this site to make him a Noahs Ark Cake. I made all of the animals with ready to roll fondant using plenty of food coloring and imagination. It was really fun. The bottom cake was a butter cake spread in blue … Read more