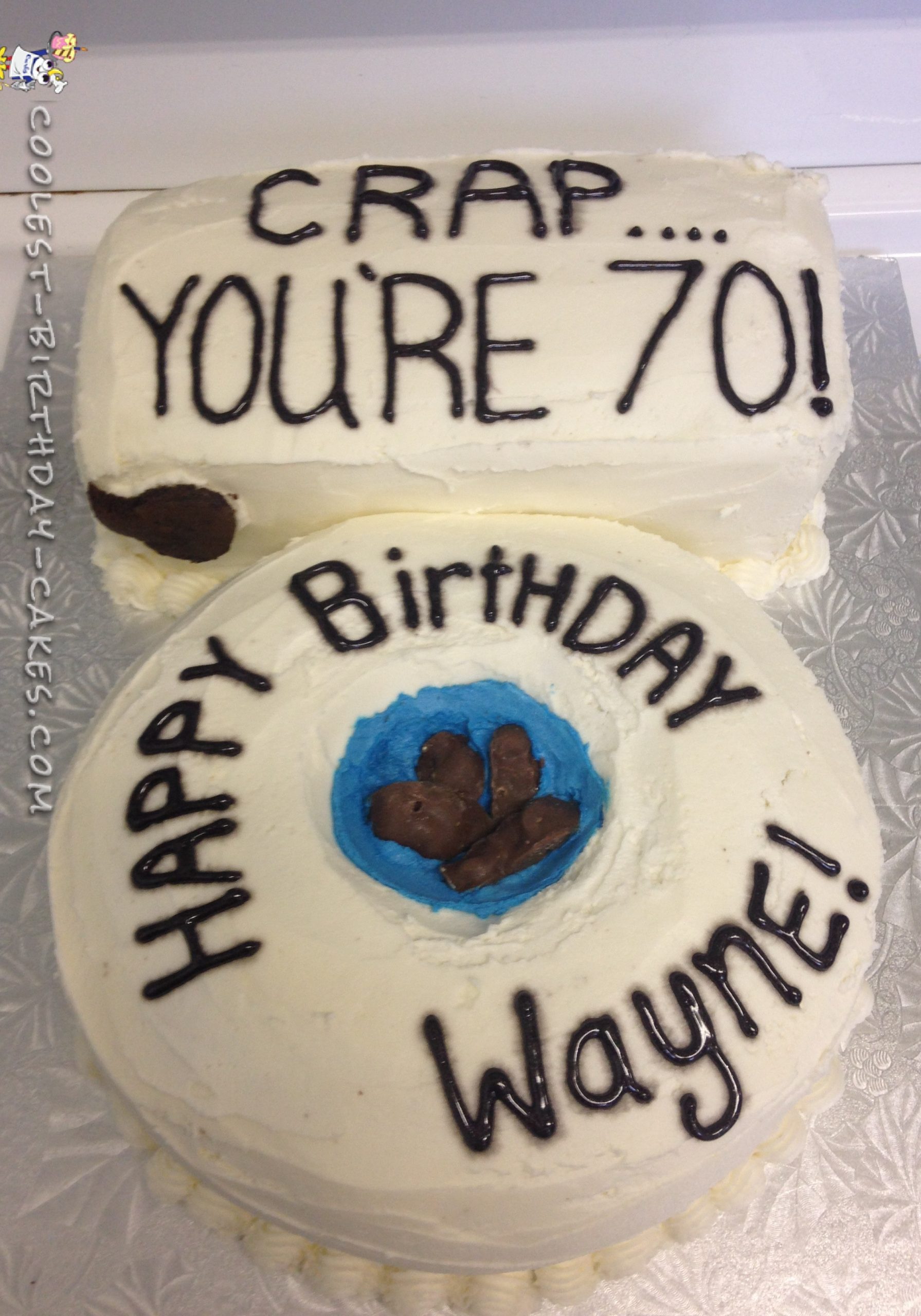 I made this chocolate fudge cake for my father in laws 70th birthday. He had just retired from working in hardware so thought this idea was perfect! He has sold toilets and all things plumbing for over 50 years (Plus he has a great sense of humour)! The cake was a huge hit at his surprise … Read more 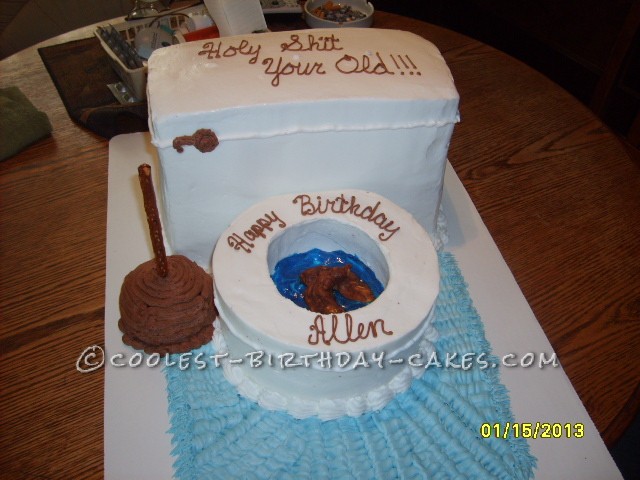 A friend’s husband complained constantly about getting older. “Crap I am getting old”, he’d say.  We grew tired of this continuous whining and made him this toilet cake for his 40th birthday. My friend found this cake idea on an internet site, so we had to try it. We had a lot of fun doing this … Read more 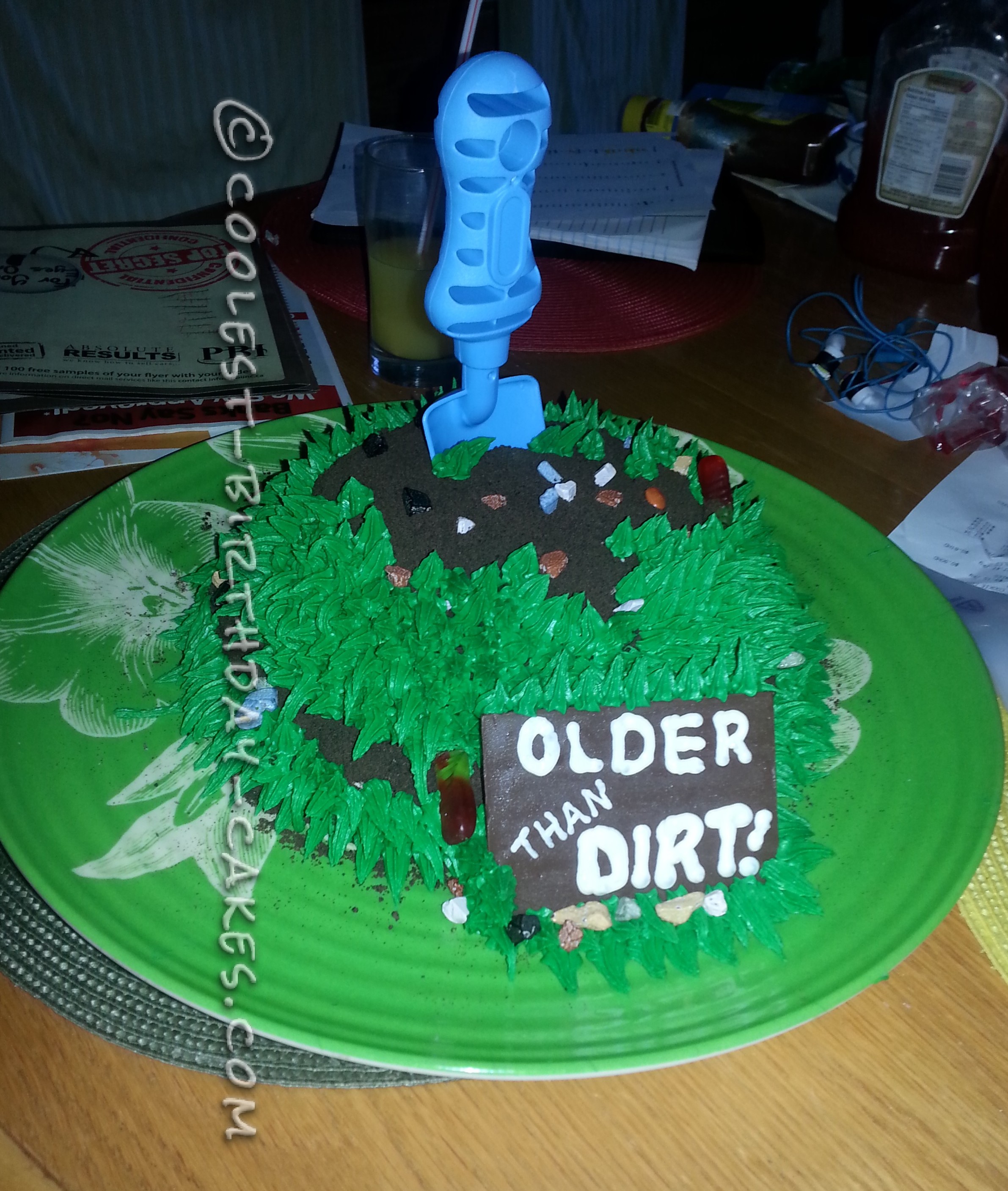 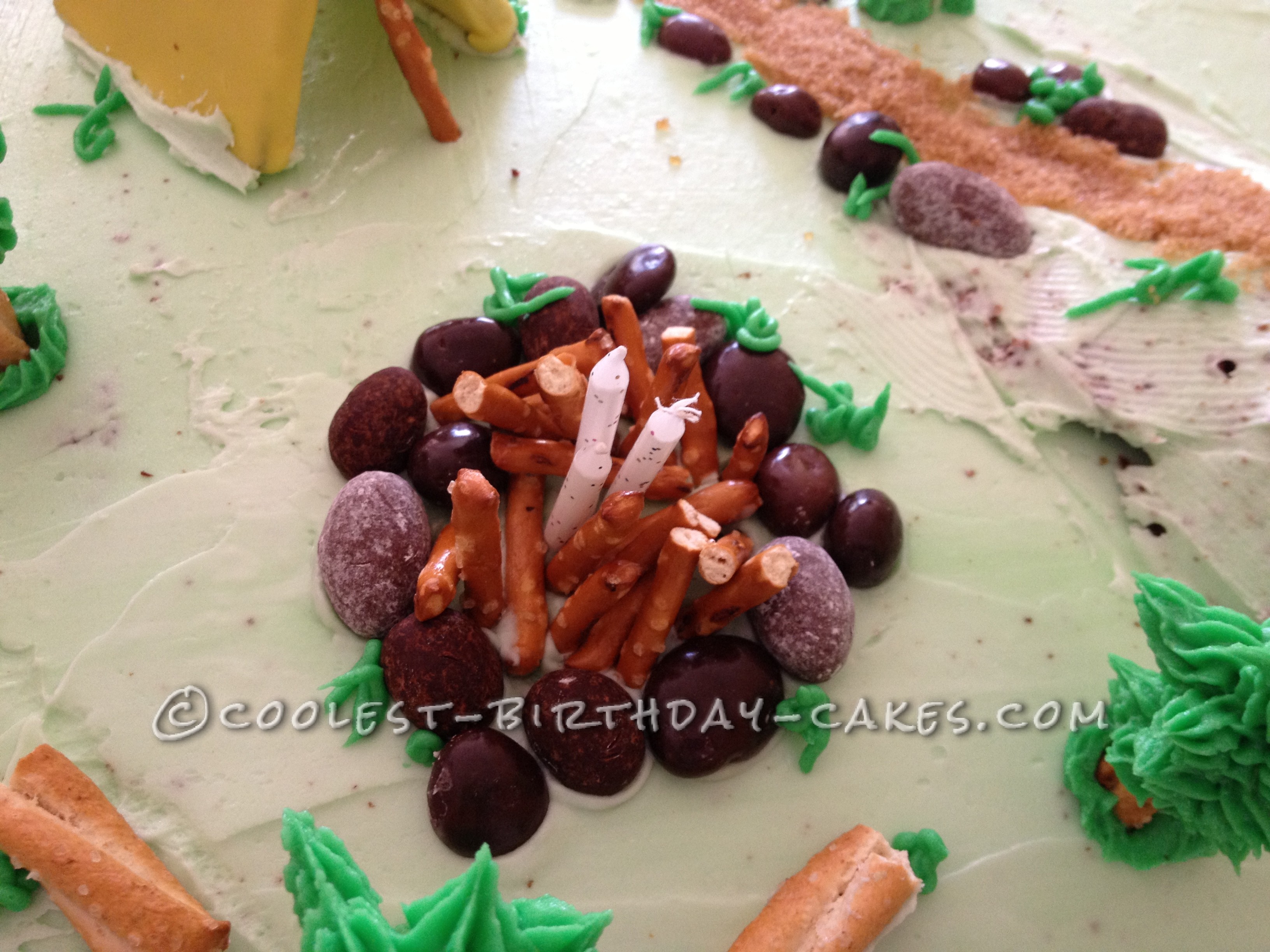 I have worked on baking and decorating several cakes but this one really “took the cake” both in terms of effort put in and accolades received. A friend who is an avid hiker was about to turn 40 and I took on the onus of baking the cake. This hiking theme cake was 11 inch … Read more 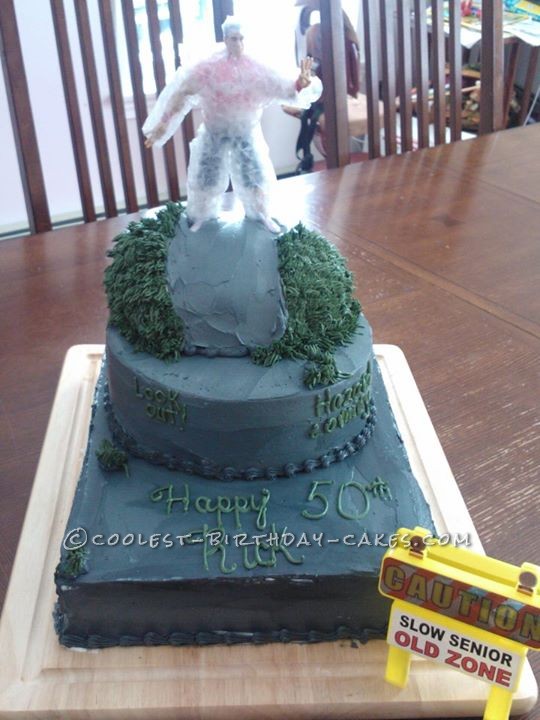 My uncle turned 50 and he is incredibly accident prone. Due to another accident, he had recently lost vision in his right eye.  My aunt wanted a fun cake that wouldn’t hurt his feelings. During a phone conversation with him, he spoke on the need to be bubble wrapped because of his latest injury. It … Read more

For my husband’s 40th birthday party I decided to go with an Over the Hill theme. I searched and searched for ideas for cakes and this is what I came up with. This cake is 2 layers of 9 by 13 cakes. After the second layer was placed, I cut out a small rectangular piece … Read more 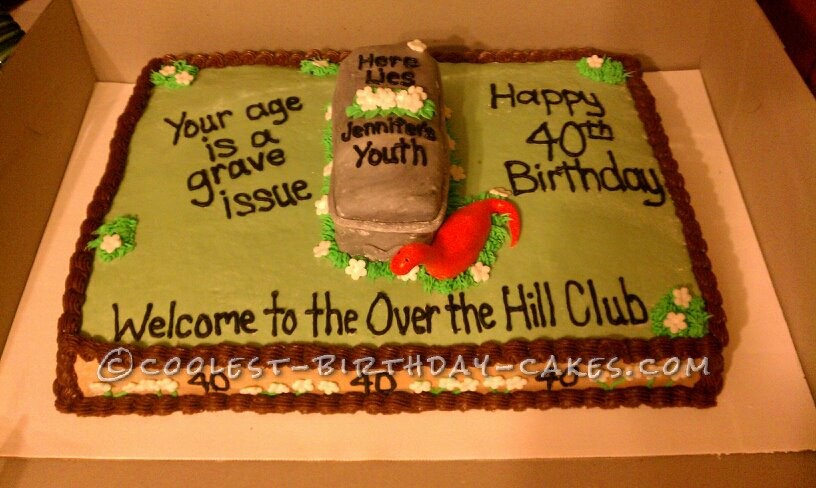 This Over the Hill cake was two 11″x15″ chocolate cakes filled with cherry pie filling. It was iced with chocolate butter cream and covered with fondant. The fondant on the sides was tinted with a small amount of brown, and the top was tinted with moss green. The casket was made using 4 cakes made … Read more 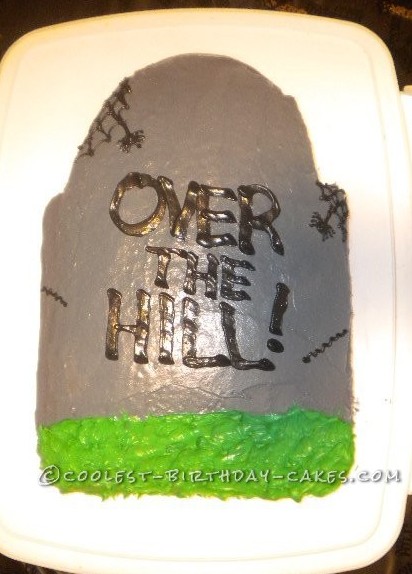 I made this Tombstone birthday cake for my dad’s surprise 50th birthday. It was really easy.  I just made a boxed cake in a 13×9 pan and cut it out in the shape or a tombstone.  It was very easy to decorate as well.  Just frosted the cake with colored frosting grey, then piped in the green, … Read more 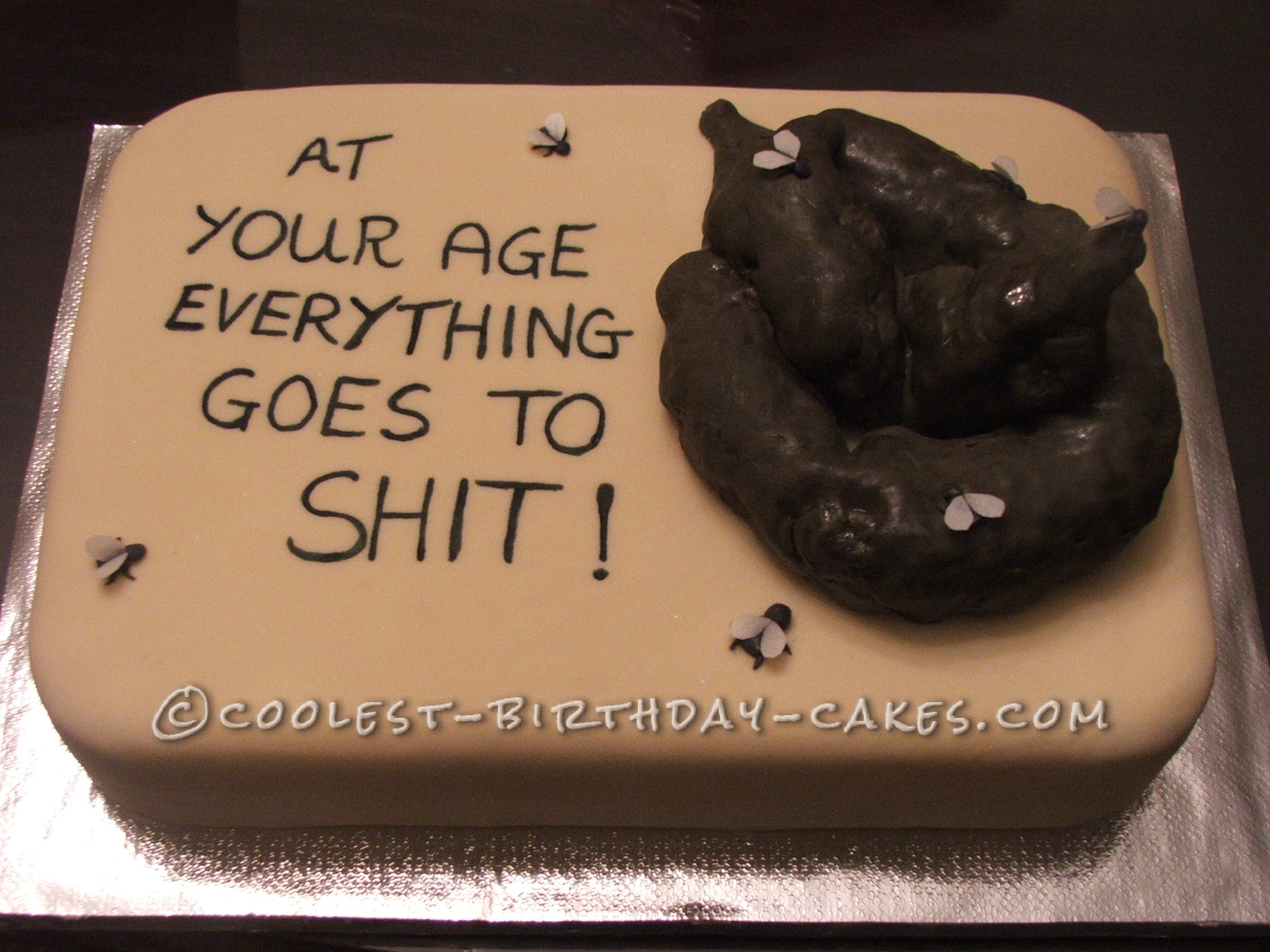 My husband and I have 4 couples who are our best friends. We go out together very often and meet at our respective homes too. One day the wife of one of them phoned me and asked me if i could make a cake for her husband’s 40th birthday. She was going to organize a surprise party for him … Read more 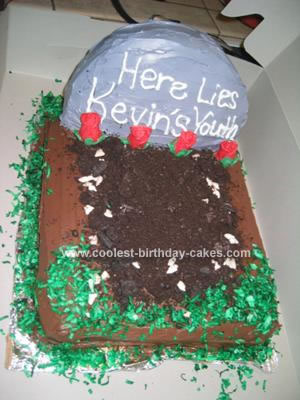 I used a 9×13 rectangle pan for the graveside, and a 9 inch round for the tombstone. I always freeze my cakes before decorating as it makes it easier to cut them and frost them. I cut a groove into the rectangle cake to make a place for the round one to sit. I cut … Read more 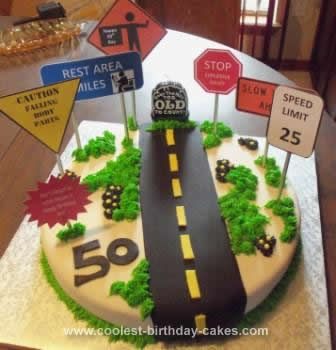 This Homemade Over the Hill Birthday Cake was so easy to make and took very little time. This cake is made with a 16” round cake pan and two boxed cake mixes. Suggest that you make the signs in advance. Cover the cake with a buttercream crumb coating prior to fondant. This cake is covered … Read more

I wanted to make a cake for my husband’s 40th birthday that would really “wow” him, represent his interests and make fun of while still celebrating the big 40. This Homemade Over the Hill 40th Birthday Cake is what I came up with. Since I wanted to use the car of his youth I decided … Read more