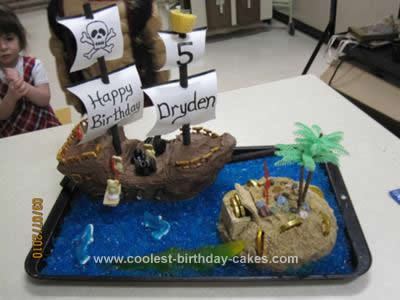 My son wanted a pirate ship cake for his fifth birthday. I decided to go all out! Here are the details of this Pirate Ship Cake Design: -Large loaf pan for ship (carved to shape) -Small loaf pan for rear of ship -Oreo sipper cookies for masts -Butter cream icing -Teddy Graham cookies for pirates … Read more 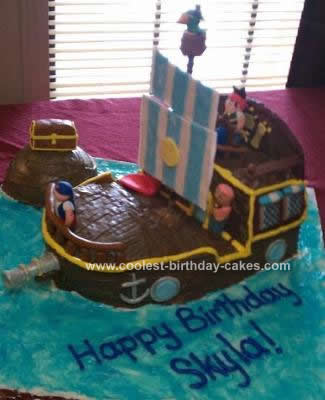 I made this pirate ship cake to look like Bucky from Jake and the Neverland Pirates. I started by baking 2 9×13 cakes and stacked them. Then for the stern, I baked 4 loaf cakes and stacked them, putting plastic dowels in every 2 layers to hold the weight. The steps up to the bow … Read more 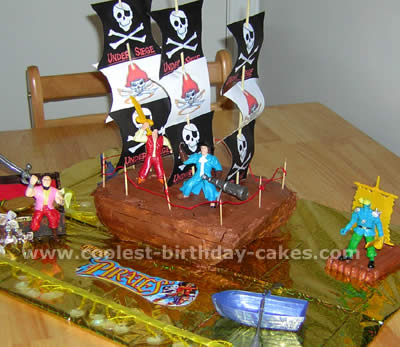 I got this idea from surfing the internet in search of a pirate cake; it was pretty simple. I used a bought cake mix and icing. Two round pans for the cake. Once baked, cut both into halves. Let cool. The pirates, boat, raft, etc. were all bought at the dollar store. All glued on … Read more 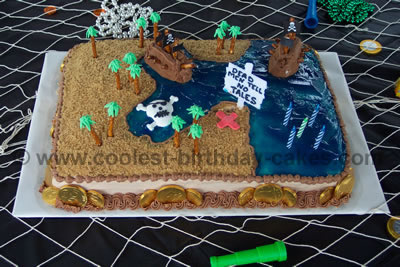 This Pirate birthday cake was for my sons 5th birthday. It’s an 11 X 14 pan. I use two cake mixes. The ships are built with Graham crackers and pretzels with paper sails attached with dots of icing. The water is made with Wilton Piping Gel tinted blue – the land is covered with brown … Read more 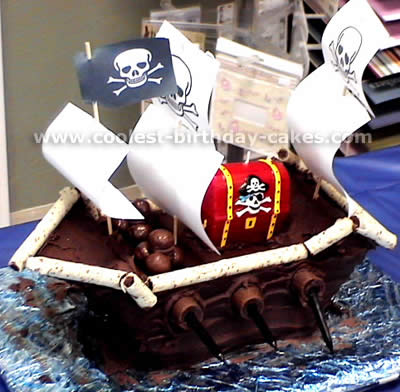 I baked a regular cake mix and baked it in a loaf pan. Then I carved the sides rounded like a ship would be. I took the extra pieces of cake and made the triangular piece on the front and raised deck on the back. I printed the pirate flag and sails on the computer. … Read more 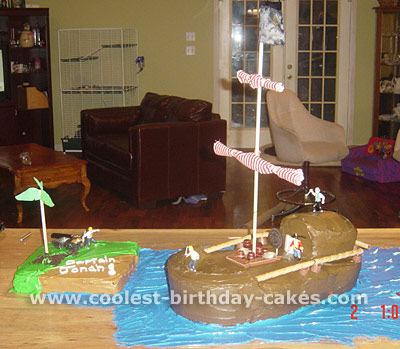 I got the great idea for this pirate cake from this website. I changed it a little because I needed a bigger pirate cake. This pirate cake was 5 round cakes and 1 square for the island. 4 rounds cut in half then slice off the bottoms just enough to make them stand. Then 1/2 … Read more 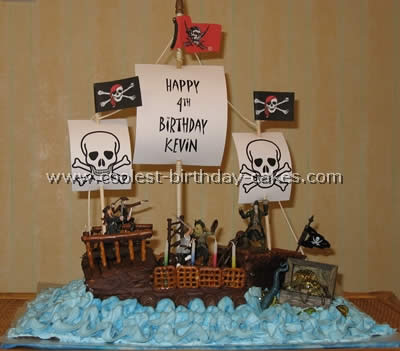 I baked this Pirate Ship Cake for my grandsons fourth birthday. To make the ship I baked two boxed cake mixes in 13×9″ pans. For the bottom of the ship I cut two corners off one end of the cake to form the shape. The second layer I cut a triangle for the front of … Read more 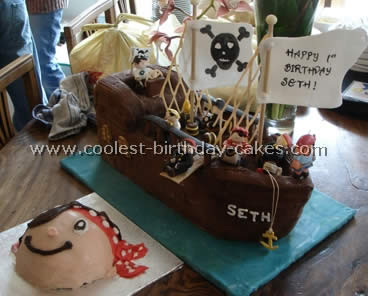