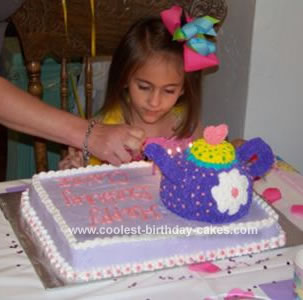 This tea party cake was made for a good friend’s little girl, her 5th birthday. The sheet cake is covered in buttercream icing, the tea pot is the sports ball cake pan, I trimmed the bottom and top, took one of the trimmings and used a circle cookie cutter to make the top of the … Read more 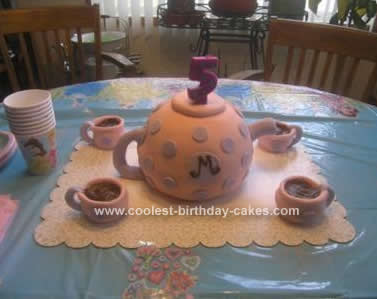 My daughter loves to play tea party. For her 5th birthday I decided a teapot cake would be perfect! I figured it would be quite a challenge since I had only ever made 3 cakes before this! To my amazement this Tea Party Birthday Cake ended up being easier to make than the others. I … Read more 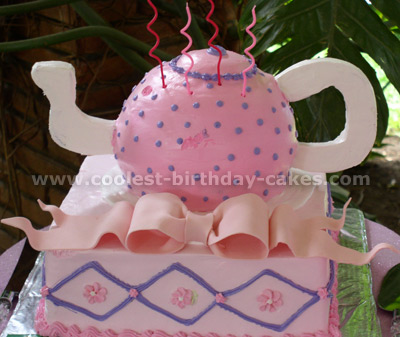 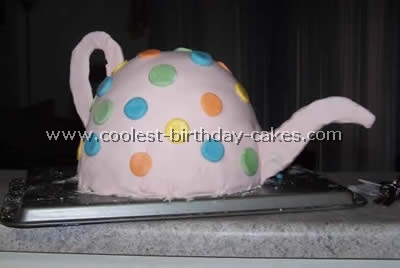 For the teapot shape I used the mixing bowl of a kitchen aide mixer (yes its safe to use in the oven) and the base to give height and shape was a 2-inch thick cake pan from Wilton. Inside the layers of the cake as well as the outside of the cake was a buttercream … Read more 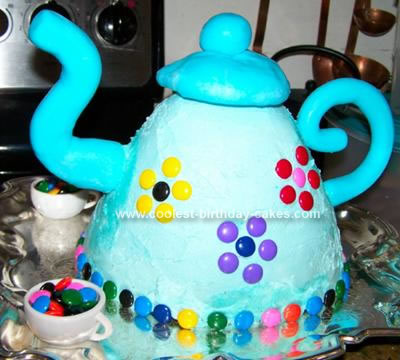 I was inspired by the cakes on this site to make this tea pot cake for my four year old’s tea party birthday party. I used the cake pan for the skirt of a Barbie doll cake. I made the lid, spout and handle from fondant that I tinted blue. The frosting was buttercream. The … Read more 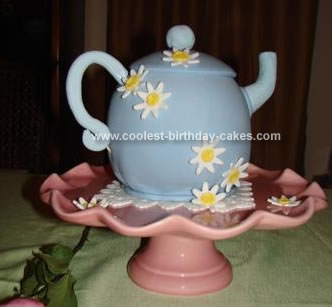 I had seen such cute teapot cakes, and I finally got a chance to make my own teapot cake! A couple of days ahead, I tinted some Wilton gumpaste with Wilton delphinium blue gel food color, and formed the spout and the handle and the little ball on the top of the cake. I inserted … Read more 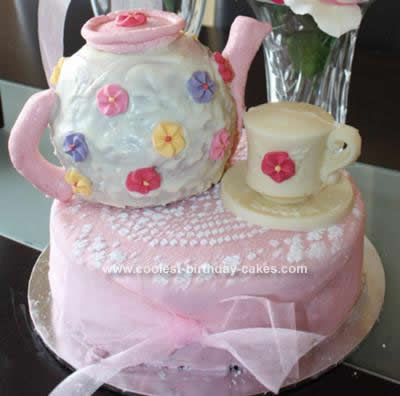 This Tea Party Birthday Cake is my first submission to this site so I hope you like it! After being asked by my 7 year old daughter for a Tea Party for her birthday I immediately knew I was going to have to make a Teapot cake. The idea evolved further when I found a … Read more 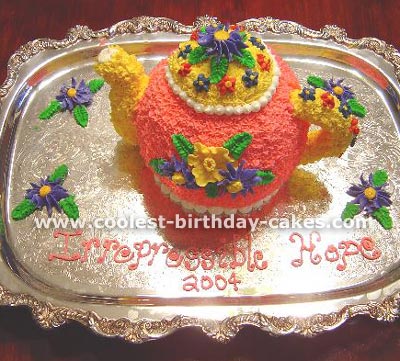 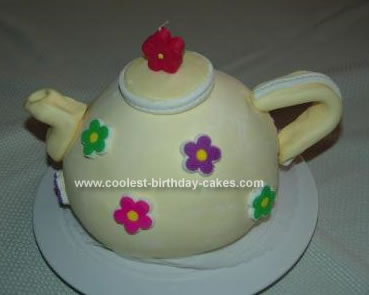 For my daughter’s 1st birthday I wanted to create a simple girly theme and make something that was fun,easy and typically British (to celebrate our heritage). I decided therefore that the way to go was to have a tea party with flower shaped sandwiches to nibble on and a teapot birthday cake as the centerpiece. … Read more 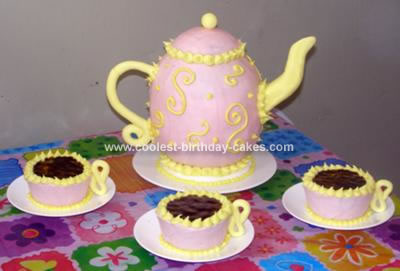 Everyone loved this tea party cake. I made it for my daughter’s 2nd birthday party. We had a tea party and the girls had a blast. I kept the cake hidden until it was time and everyone was blown away, especially my daughter! I used the Wilton ball cake pans along with two oval cakes … Read more 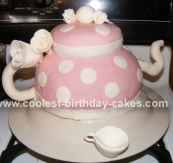 My 4 year old daughter wanted to have a tea party for her 4th birthday. To go with the theme I attempted a Polka Dot Teapot Birthday Cake. I used a glass Pyrex bowl and baked one cake in 2 bowls. Let them cool then shaped them and crumb coated them. After the frosting was … Read more 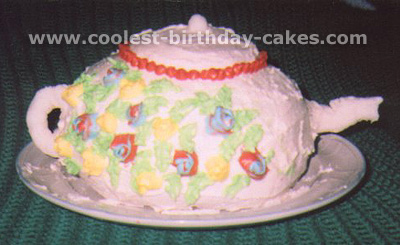 Here is the cake recipe: I baked two cakes in round glass baking bowls and made a large cupcake in a pot pie tin so it would mushroom out. I then cut the big top off and saved that for the teapot lid. I took the baked bowl shaped cakes and frosted the middle and … Read more 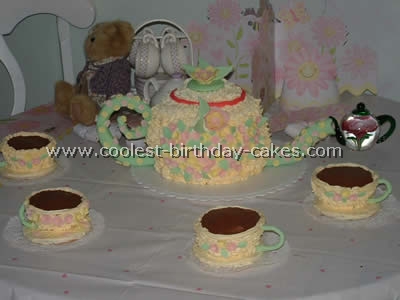 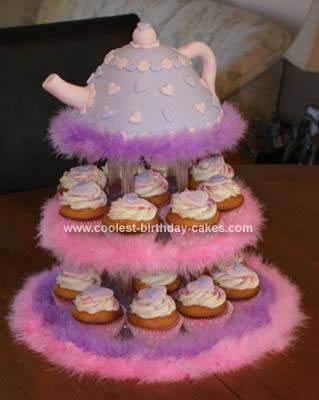 I made this Teapot Cake and Cupcakes for a young lady holding her first tea party. The most challenging part – getting the shape of the spout correct – I hope I did. I used the Wilton Classic Wonder Mold Doll Cake Pan for the teapot. I added CMC to the fondant before I made … Read more 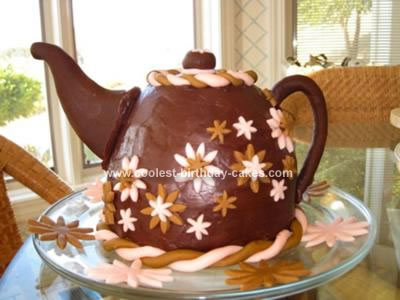 This Teapot cake was actually for my best friend’s bridal shower, and the colors match her wedding. The shower was at a tea house, so I thought a tea pot cake would be really fun. I’d never done a 3-D cake before, so I read up on this site for ideas first! I started by … Read more 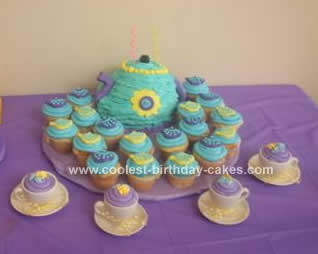 I made this Tea Party Birthday Cake for my daughter’s second birthday. We used the tea party/Alice in Wonderland theme. For the teapot I used the smallest pyrex glass bowl, with a cake mix in it. I made two of these and stuck them together with frosting and tooth picks to make a big 3D … Read more 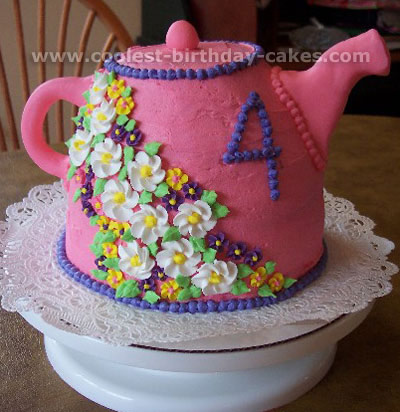 After the cakes were completely cooled, I spread frosting on the 8-inch layer and placed the dome-shaped cake on top. I frosted the cake with homemade frosting and then placed the handle and spout pieces on the teapot. I made those pieces several days prior with store bought fondant, which I colored and formed into … Read more 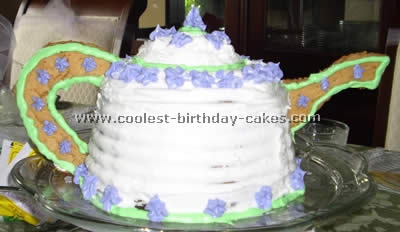 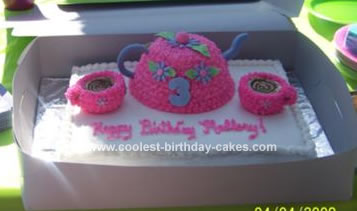 I used a pampered chef bowl to make the teapot. I used gum paste to form the flowers and the spout and handle. The bottom of the tea party cake is just a half sheet cake decorated in white buttercream icing. I used white icing to write the letters and then went over them in … Read more 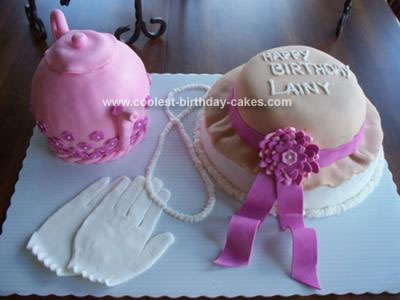 This Teapot Birthday Cake was for my 3 year old niece’s birthday day. She was having a Tea Party. I used the small batter bowl from pampered chef and one of the half sides of a ball pan. The hat is a pan I don’t think Wilton makes anymore, but would be easy to recreate. … Read more 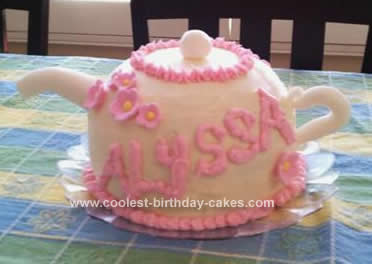 Thanks to the many great ideas and photos on this site, I was able to pull off the best Homemade Fancy Tea Party Teapot Cake I’ve ever made for my daughter’s 5th birthday! I bought 2 strawberry cake mixes, baked one in a (10 cup) Pyrex bowl and the other in a regular 13×9 cake … Read more 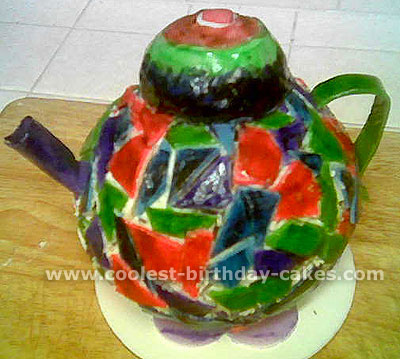 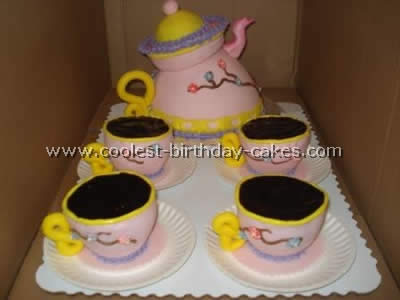