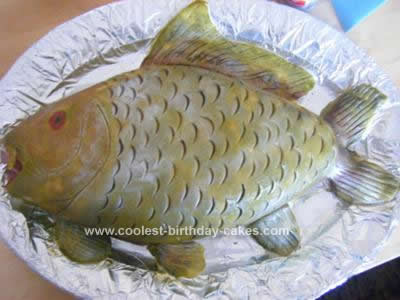 I baked 2 x 8inch Victoria sandwiches, sandwiched together with jam and butter cream then butter creamed the two cakes side by side big enough to cut a template out of a fish, omitting the fins and tail. When template was cut out I started to shape the fish to give it a realistic shape, … Read more 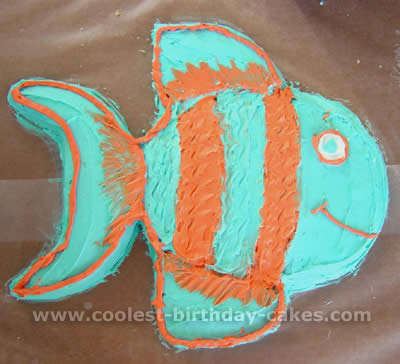 I baked this fish birthday cake in two round cake pans. The first circle made up the main body of the fish. From the second circle, I cut two crescents, a large one to form the tail, and a narrow one, which I placed on the front of the head to give him a more … Read more 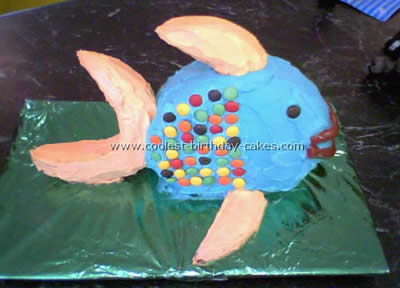 I made 2 round fish birthday cakes and trimmed them to make the fins. I used wooden skewers to attach the fins. I used mock cream/butter icing for the frosting colored blue. I used smarties for the scales and red licorice for the lips. These were secured with toothpicks. It was time consuming and I … Read more 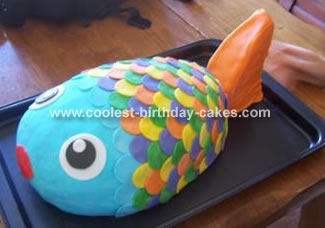 Two sheet cakes stacked, carve into whale like body for a fish cake. Fondant a layer over whole fish. Cut scales with round cookie cutter, layer on overlapping. Tail is cut from an additional square cake, make shape however you’d like. Frost with regular frosting or fondant like I did. Have fun, my nephew almost … Read more 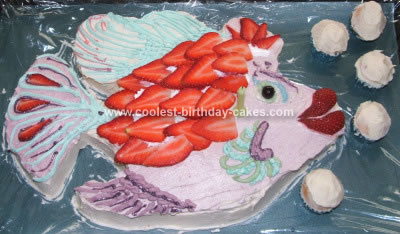 This Fish Birthday Cake is a completely gluten-free masterpiece, with the only dairy being butter so suitable for a lactose-free and caesin-free diet too. The design was inspired by some of the other fabulous cakes on this site (particularly cakes #40 & #46) along with a beautiful clipart I stumbled across on the net one … Read more 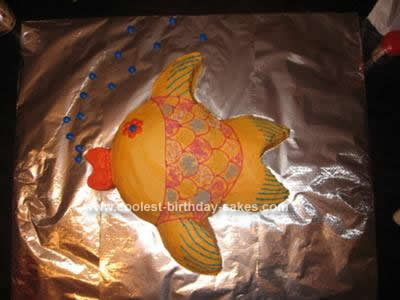 I made this Homemade Goldfish Birthday Cake for my daughter’s 1st birthday. I used packet cake mix for the cake part (Greens butter cake), it is really tasty and very reliable. I made butter icing for the icing and flavoured it with vanilla essence. My skills don’t lie in decorating so my husband and my … Read more 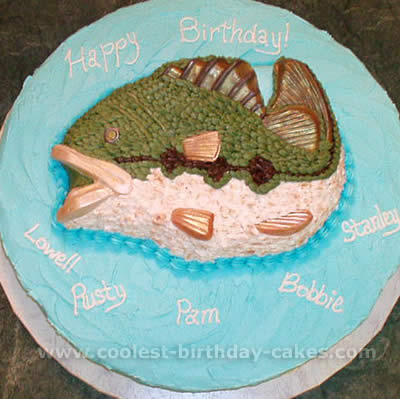 This fish is a chocolate cake with the mouth, fins and tail molded out of candy melts and then brushed with luster dust. 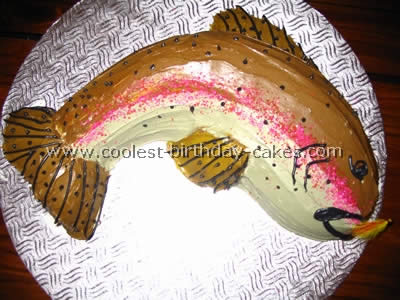 I used a “dolphin” shaped cake pan and cut off the dolphins snout after baking the cake. I then mixed food colorings to get brown grayish-green and other fish-like colors. I decorated with shiny sugar “cake decorating” crystals. The cake was for my husband’s birthday, he loves to fish so I thought it would be … Read more 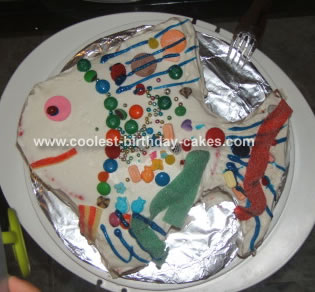 When my daughter told me that she wanted a fish cake, I thought, how in the world am I going to do that? After calling a custom cake bakery and discovering that it would be $50+ to have one made, I was determined to do this myself! Fortunately, your website came to the rescue! I … Read more 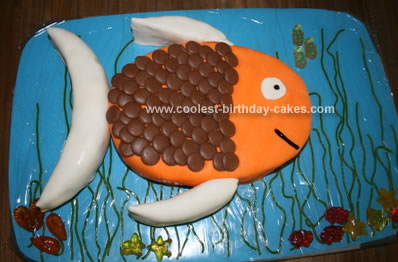 I made this fish birthday cake for my daughter’s second birthday. I hadn’t decorated a birthday cake in quite a few years so this was a challenge. It is made from one round cake tin. The cake itself is a flourless orange cake which is then covered with a marshmallow fondant icing. It was the … Read more 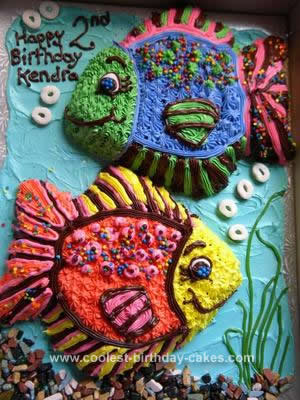 For my daughter’s 2nd birthday, we decided to throw an Under The Sea theme party, complete with a Pirate Treasure Hunt, Sea Crafts, and plenty of fun filled fish games. I ended up renting cake pans from the Bulk Barn (very inexpensive) and baked one vanilla and one chocolate cake. While the cakes were cooling … Read more 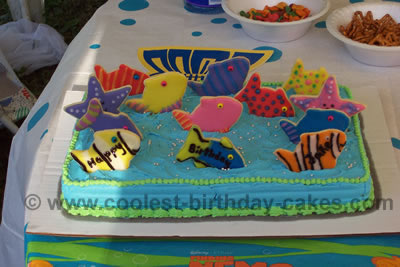 My girlfriend had used this fish birthday cake idea for my sons first birthday. His birthday is in the summer so I went with the Finding Nemo / Tropical theme. She did a sheet cake half white half chocolate with vanilla filling. The fish on are sugar cookies with a sugar icing glaze, they were … Read more 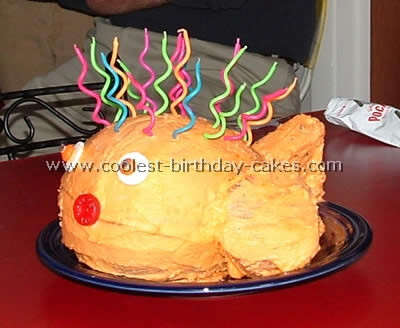 For a 19th birthday for a girl who LOVES fish we made 3D fish birthday cakes using a medium sized egg mold and a small rectangular pan. The egg halves were frosted together and the fins were cut out of the rectangular piece to be held in place with two toothpicks each. 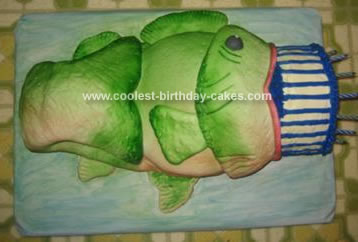 I saw this fish birthday cake on this site (originally submitted by Carol). I just had to try it. Where as I don’t think it came out as well as her’s, I was definitely happy with it. This was the first time I used rice cereal, fondant and air brushing. Making cakes is FUN! Unfortunately, … Read more 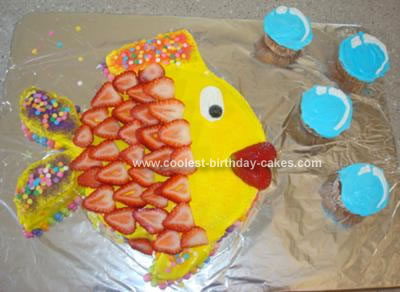 My daughter was about to turn two and we were looking for a theme for her birthday. We then realized that she loves fish so we started looking for a fish birthday cake. We found this website and were happy to find so many great ideas. This cake is a combination of the ideas we … Read more 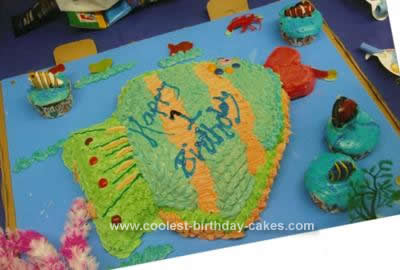 I made this Fish Birthday Cake Idea for my friend’s son’s 1st birthday. I used butter cream frosting and used plastic toys for decorations. I put cupcakes for the air bubbles.It was one of my first cakes I made. I used a fish shaped cake pan and cut a cupcake in half for the lips. … Read more 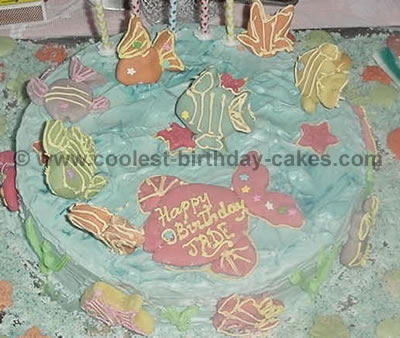 The theme was actually a fish party thus the idea for a fish birthday cake arose. I made the base of the cake with Betty Crockers readymade mix in a huge dish, made some glazed icing (icing sugar and water) after dry took a flat spatula, dipped it in hot water, dried it and put … Read more 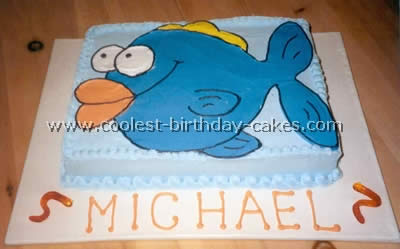 This was my first grandson, Michael, first birthday cake. They had a fish theme so I made fish birthday cakes, with a hot dog party and swimming in the backyard. They were given their birthday treats, bucket with a shovel. It was an 11” x 17” cake pan and it takes 2 cake mixes for … Read more 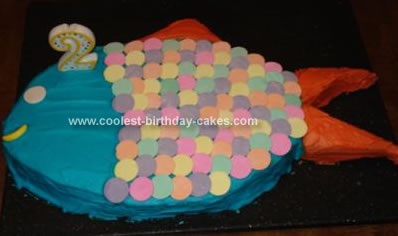 I made this fish birthday cake for my son’s 2nd birthday. He loved it! It was very easy. Use one cake mix, bake in a 9×13 pan, cut out the body shape and use the corners that you cut off as the tail and fin. I used Necco wafers(candy) on top for the scales but … Read more 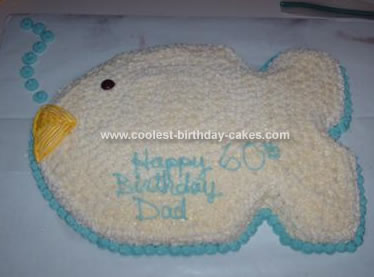 I made this Fish Birthday Cake for my Dad. It is a French vanilla cake and iced with homemade buttercream icing. I baked the cake in a typical dark coat pan. I let it cool for about 2 hours (on the counter). After cooling, I cut the shape of the fish out (while in the … Read more 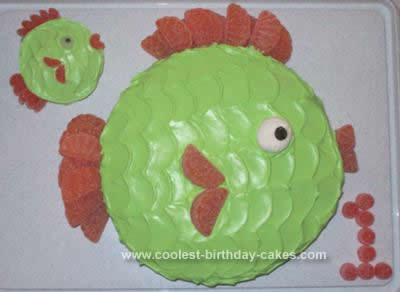 I saw a fish cake like this in a cake decorating book. It was so simple to make and was perfect for my son’s first birthday. I added to it by making the smaller fish so that he could have a “cake” all to himself and the gumdrop number 1 to mark the occasion. I … Read more 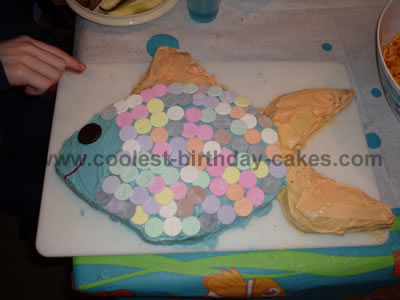 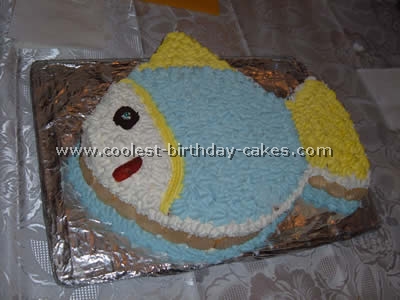 For our fish birthday cakes I used a plain chocolate sponge cake with some jam in the middle (if desired). I decorated it with whipping cream, colored yellow and blue with food coloring. I used ice cream wafers cut with a small round cutter. 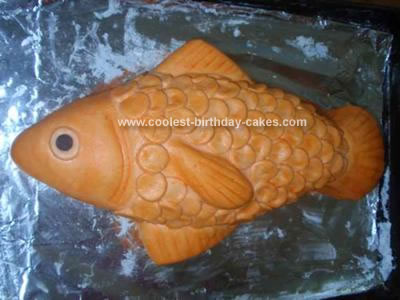 For my husband’s birthday, I wanted to make a fish cake. My daughter said it should be a goldfish cake (her favorite cracker). We started with a cake baked in a 9x 13″ pan. Once cooled, I leveled it and cut it lengthwise to make two long rectangles. With frosting in the middle, we stacked … Read more