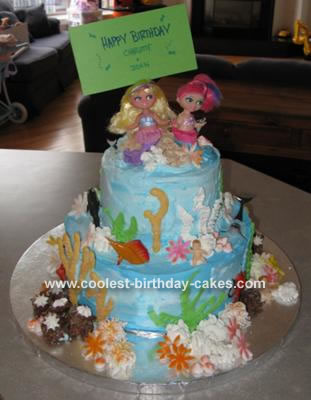 I made this under the sea cake for my 4 year old daughter’s birthday. She asked for a cake with ‘everything like mermaids and fish and crabs’ on it. I started several days before and made the decorations for the coral reef. They included chocolate coral (melted white chocolate colored and piped onto wax paper), … Read more 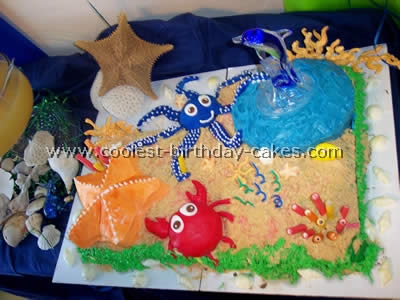 This ocean cake was made using four cake mixes. I put vanilla wafers in the food processor for the “sea floor”. The crab and octopus were made from a small custard dish to bake the cake mix. I covered it with colored fondant and then molded legs and eyes from the colored fondant. The “tube … Read more 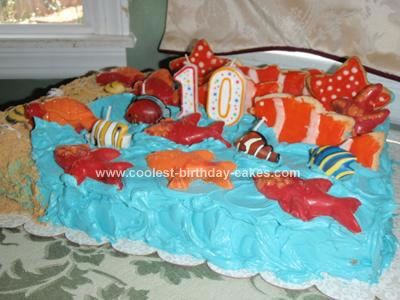 This cake was not hard to make at all, but it did require a lot of prep work. I saw a very similar homemade fish ocean birthday cake online and my son loved it. This is what I came up with. 1. I had to make a batch of sugar cookies cut out in the … Read more 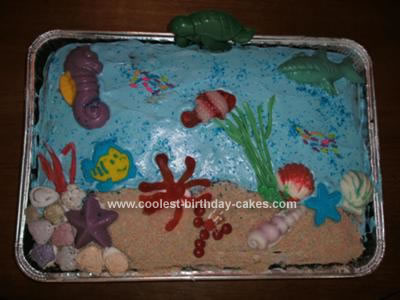 I made this under the sea cake for a teacher appreciation week with this theme. I took a lot of ideas off this site and just free handed it. The cake was just a mix in a 9×13 pan. I used ready made frosting, and did the sand first, its the stuff from the bottom … Read more 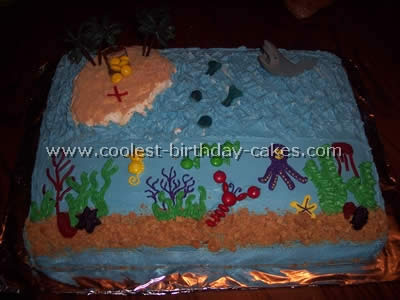 Cakes are my new hobby. Being a mom of FOUR with two children in school Ive got plenty of them to make! This ocean cake was for my daughters Kindergarten class learning about the ocean. I made a butter cream frosting, made the octopus seaweed barnacle (red barnacle is twizzler) and starfish freehand with the … Read more 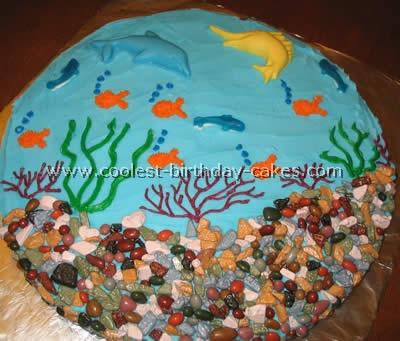 I used a chocolate cake for the inside of this ocean cake. Then I used pre made icing form a bulk store and colored it to the colors I wanted. The fish rocks are also bought from a bulk store (I put them on one at a time). People asked me all the time if … Read more 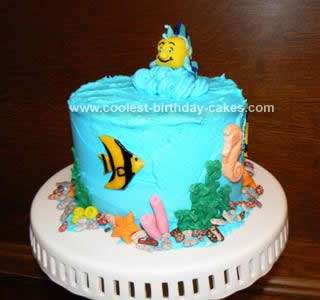 I made this Under Sea Birthday Cake for a dear friend whose daughter was turning 5. This was a very small cake, 2-6 inch rounds with blue butter cream. I put it on a pedestal plate because there was a Little Mermaid doll next to the cake and I wanted height. I used marshmallow fondant … Read more 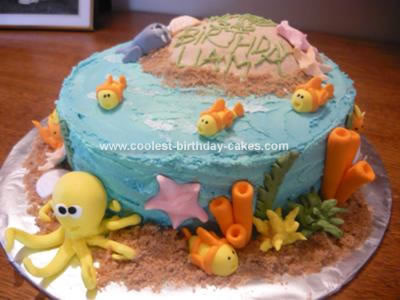 This under the sea cake is a plain chocolate cake that I made for a 3 year old (also made a tool cake for his twin brother). The icing is buttercream with fondant sea creatures. To achieve the two-toned effect with the icing, I first used blue icing around the side then used teal around … Read more 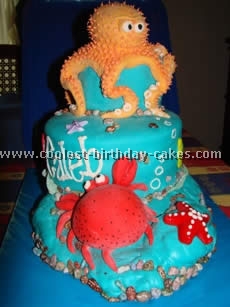 The birthday boy wanted something octopus – like for a sea themed party (a summer swimming party.) It needed to serve a large number of people, so I wanted to create an ocean cake that was made of three stacked cakes.The bottom cake is a two-layer chocolate cake, baked in a large oval pan, and … Read more 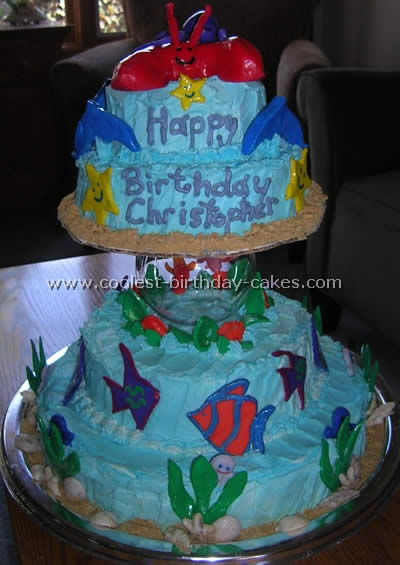 My son wanted an ocean cake so I made some creatures out of candy melts using a cookie cutter mold and covered them in fondant. The sea shells are made out of candy melts, the fish are from fondant painted with edible paint, and the sand is crushed graham crackers. The middle is glass globe … Read more 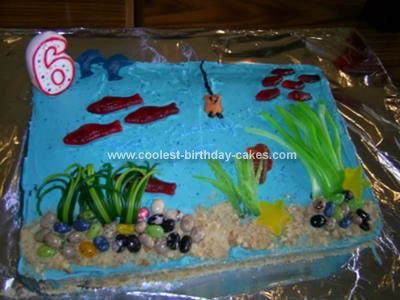 This ocean birthday cake was the first time I ever decorated a cake, other than putting icing on it and writing “Happy Birthday”. It was so easy and fun. This was a couple of years ago, but I think I can remember how I made it. The cake was chocolate, my son’s favorite. I used … Read more 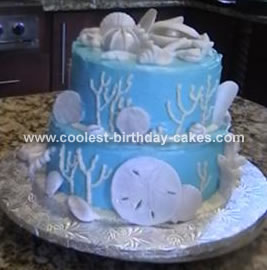 This is a birthday cake I made for my mother-in-law’s birthday (Cheryl). This seashell cake is a dual tiered (yellow & chocolate layers) seashell ocean themed cake. Standard 10″ and 8″ cakes iced with homemade buttercream icing tinted an aqua/blue color. All the seashells, sanddollars and coral are hand sculpted out of white fondant. After … Read more