I made this Roxy Logo Birthday Cake for a girl who was turning 8. The Roxy logo was the theme. The cake was a banana cake using Betty Crocker’s vanilla cake mix with two mashed bananas mixed into it. YUMMY! I used 3 cake mixes baked in a large square cake tin. I made up … Read more 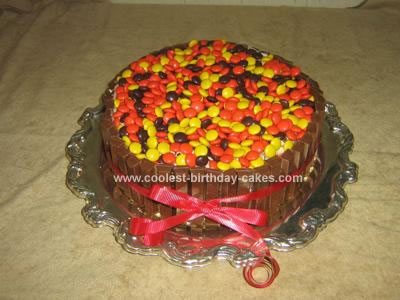 This Candy Barrel Cake was chocolate cake, frosted with chocolate peanut butter frosting, ringed with Kit Kat candies, and topped with Reese’s Pieces candy. It is the simplest cake to make, just be sure to hollow out the top of the cake to below the top of the Kit Kats, so that the candies on … Read more 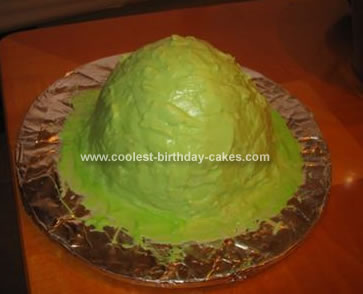 My little sister is nicknamed Booger so it’s only fitting that I made her a booger cake for her birthday. She requested red velvet so the interior is just a box red velvet cake. I had to improvise the shape as I wasn’t entirely too sure what shape to make a Booger Cake. The bottom … Read more 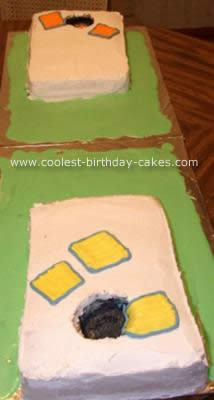 I made an 11×15 cake and then cut it in half to make 2 rectangles. To make it look more like a corn hole board I angled the tops of the cakes. I then iced them smooth white using the Wilton recipe icing. I cut the holes using a measuring cup as a guide and … Read more 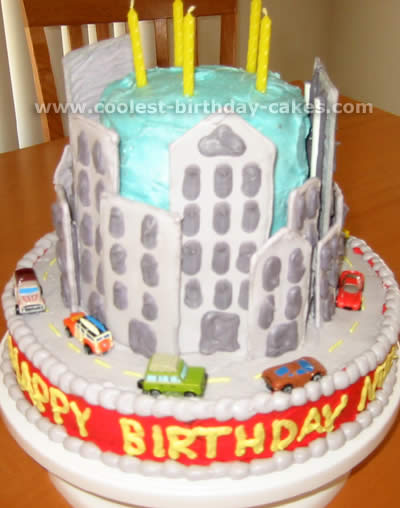 The base is a 12″ round, and the “tower” is three 5″ rounds. Its all decorated with buttercream. The skyscrapers are made of royal icing, which I had made on waxed paper the day before, and they were extremely breakable. Luckily I made several extras because they kept breaking! Wilton said to make them with … Read more 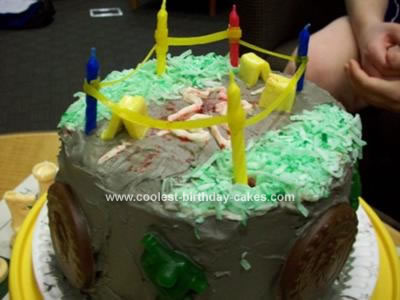 I made this crime scene cake based off of the TV show NCIS (a show basically about Navy cops). The cake is red velvet with cream cheese icing, which I turned gray with food coloring, (2 blue, 4 red, and 4 yellow over and over again until I thought it looked like road gray). The … Read more 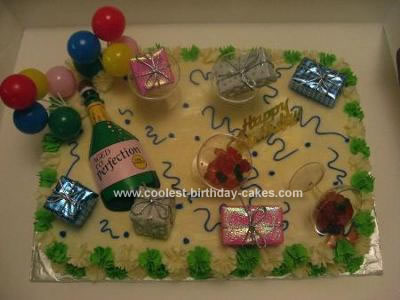 I made this 40th birthday cake for my brother’s birthday. To make this cake I used a rectangle cake pan and for the decorations I used a liquor bottle shaped ornament, four small plastic wine glasses, handmade gift boxes in various colors and balloons. First I covered the entire cake with butter icing and I … Read more 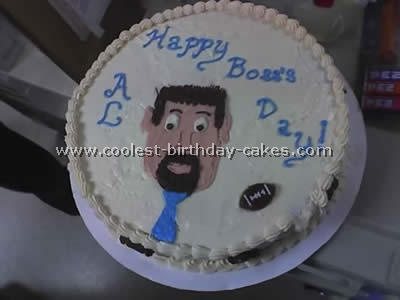 To do his face I just let my initial icing layer firm up a bit then outlined what I wanted to draw and filled it in then smoothed it out. Then I went back in and added details after that firmed up a bit. The football on the cake is a cheat. I bought those … Read more