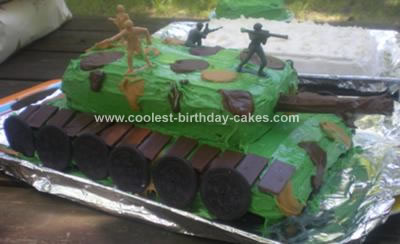 We were inspired to make this homemade tank birthday cake from this website. I made this for my son’s 6th birthday. The bottom of the tank is a 9 x 13 pan, the top is a bread loaf pan. The gun pointing out is a cereal straw that was dipped in melted chocolate chips. I … Read more 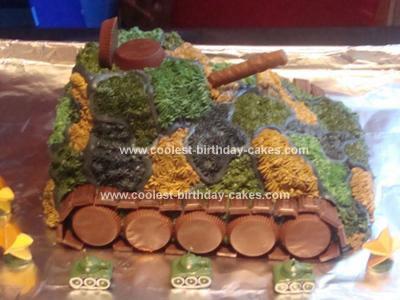 My son wanted an army-themed party, so I searched this site for Army Tank Birthday Cake designs. This cake, therefore, has a little of everyone’s ideas and I thank you all! I started by baking two 9″ x 13″ mixed chocolate and vanilla, tinted green, cakes. I then baked the third layer, which was a … Read more 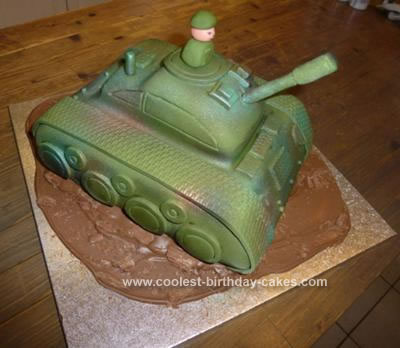 This is the tank cake I made for a friend’s little boy’s 10th birthday. He loves all things military and really wanted a tank for his birthday cake. It’s not something I had ever tried to do before so thought it would be fun to have a go. I made two large rectangular chocolate sponge … Read more 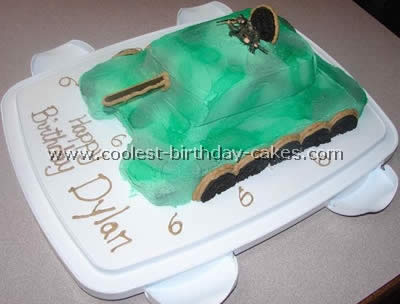 From ideas I got on this website I came up with this army cake for my sons sixth birthday. I used a 9×13 cake pan and split the 9×13 cake recipe into another a smaller pan for the top. Once cooled I cut out a bit in the front and back for some shape, iced … Read more 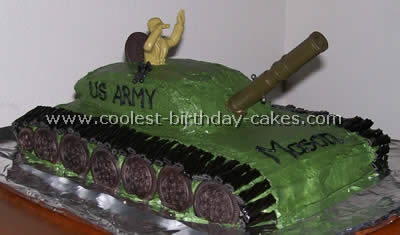 My son wanted a tank cake and I was wondering how in the world I was going to accomplish that. Then I stumbled on your website and couldnt wait to get started. I knew it was going to turn out awesome! I simply made a 9×13 cake for the bottom and then made two 9” … Read more 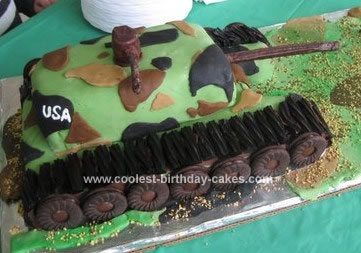 This Camouflage Tank Cake is a lot easier than it looks, so don’t be afraid! What I love most is that the whole cake is edible! It is a 9×13 on bottom and a loaf pan on top. While the cake was baking I coated the pretzel sticks, pretzel rod and marshmallows in chocolate (I … Read more 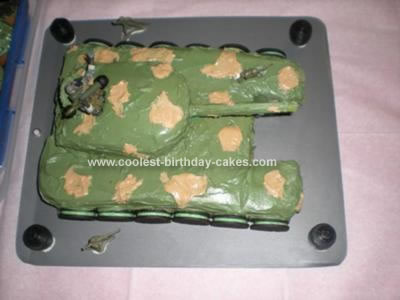 I made this tank cake for my son’s 6th birthday for his army themed party. Thanks to this site I used some of the creative ideas from others. I used two boxed cake mixes one 9×13 pan, and one loaf pan for the turret that I trimmed to the appropriate size. I stacked the small … Read more 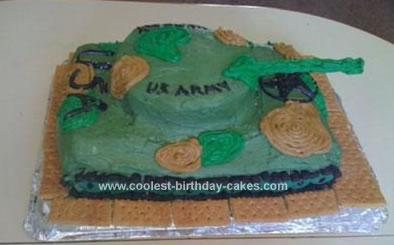 My son was having a ‘SPY/SWAT/ARMY’ birthday. He and his mom picked out a tank piñata so I figured a homemade US army tank cake would be perfect. The bottom is made out of two 9x13s with the tops shaved off of each so that they were flat. The turret is a single 8×8 cake … Read more 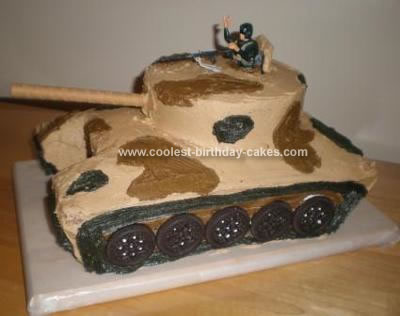 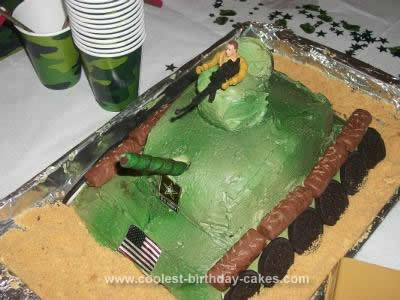 First layer was a marble cake with the vanilla colored green so the cake had the camo look when cut. Second layer was a devil food cake, and the cupcake on top was also camo. Icing was a homemade butter cream (with butter base) colored with green, brown and a little yellow for the olive … Read more 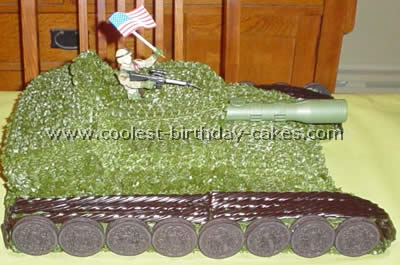 I am so excited to find your website! I was inspired by your website for the army cake! One thing that was tricky was finding the right color for the tank. I want to say that it takes a lot of green and brown coloring to get that perfect “army green”. I used a large … Read more 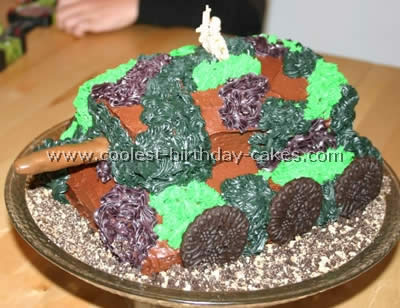 I made this tank cake for my best friends ten year old son. He’s really into the army thing. I used two bread pans to form the cake, one smaller than the other. I combined purple and red to make that dark army green color. I also used regular green and a milk chocolate brown. … Read more