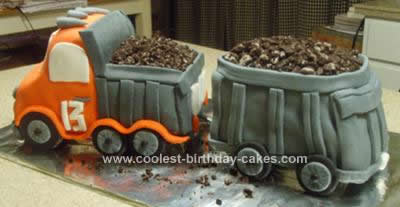 A friend of ours has a company of dump trucks. I was asked to commission a truck cake for their to be 13 year old son. His mother suggested a Homemade Double Dump Truck Cake and said that orange was his favorite color. After making the main truck and realizing it was rather small (they … Read more 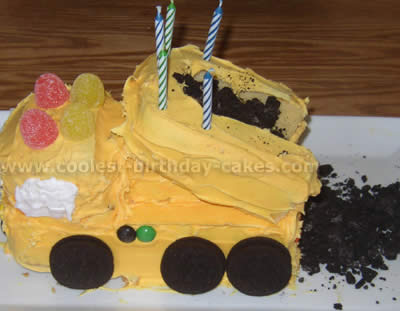 For this Dump Truck construction cake, I cut up two-pound cakes (just the pre-made kind in the freezer at the grocery store). I arranged the pieces to resemble a regular delivery truck, and then carved out the section of the back piece to make it the bed of a dump truck. I sliced a wedge … Read more 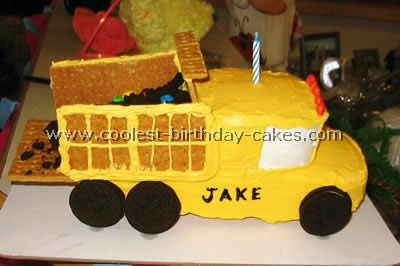 This dump cake was for my sons 1st birthday. His favorite toy was a yellow dump truck so that’s where the idea came from. I used a couple of Sara Lee frozen pound cakes and cut to shape. I had seen directions somewhere on how to cut the pieces but when the time came to … Read more 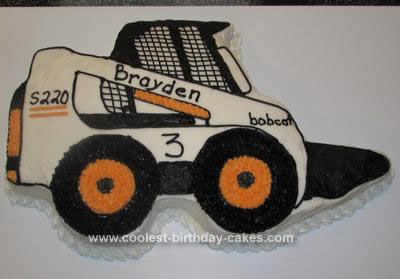 I made this cake for my 3 yr old son. He has been wanting a bobcat cake for months. His daddy has taken him for many bobcat rides, so this was defiantly going to be his birthday theme! I baked a 9×13 size yellow cake and then cut the shape of a bobcat. I had … Read more 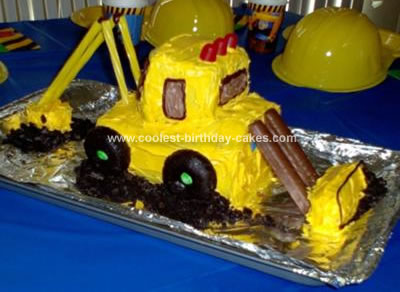 After researching a great construction vehicle cake for my twins’ 3rd birthday, I found the perfect example of a Excavator Birthday Cake I was looking for on funfamily.com. I baked a pound cake instead of buying a pre-made one like it suggested, cut off one end and placed on top for the cab. The entire … Read more 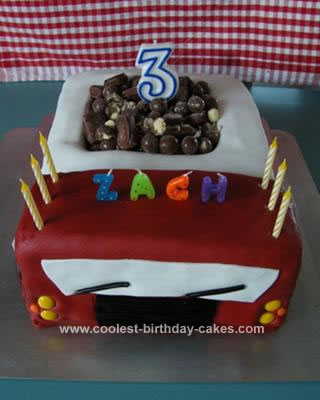 My son Zach LOVES trucks, so we decided on a BIG truck construction party theme for his 3rd birthday party. I wanted to make a dump truck birthday cake for him and looked on this website for inspiration. I got some great ideas to add to the ones I had in my head. Turning them … Read more

The base of this dump cake is a 9×13 cake pan. The wheels are 4 mini-bundt cake pans. The “cab” is a mini loaf pan cut to shape. The bed of the truck is made of two 9×9 cake pans. One cut to make the sides. The “lift” is a cake mix box. The dump … Read more 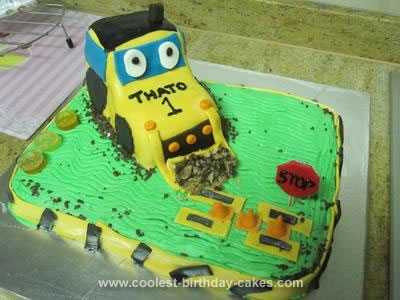 I made a dozer cake for my son’s school party and after a few people saw it, I got my first order. The hardest part was constructing the dozer and the sponge was crumbling because I prefer using a sponge cake for a good tasting cake. Everthing is edible on the cake, and the fondant … Read more 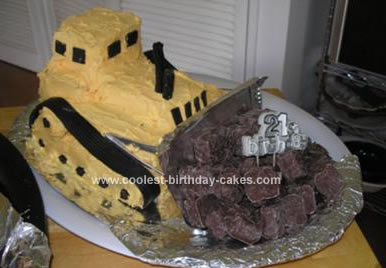 My son was approaching his 21st and said he would like a bulldozer cake. He works for Caterpillar as a heavy machinery mechanic, so I knew he would pay attention to detail. My daughter and I spent the morning with all sorts of machinery books, rectangular sponges, yellow icing and licorice covering our dining table. … Read more 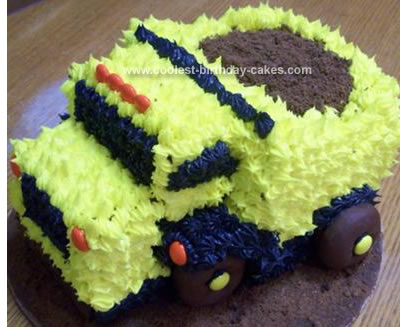 I made this dump truck birthday cake as a smash cake for my God son’s first birthday! I had been looking at dump truck cakes online trying to find a recipe and some instructions I could follow. I never really found one that I fell in love with so I sketched out a blueprint for … Read more 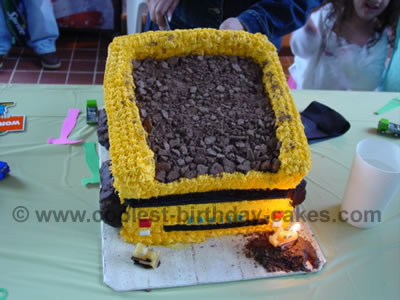 My nephew/godson turned one on June 3rd and since I gave his mom the idea of doing a construction site birthday theme & he is nicknamed tank, I figured it was only logical that I make him a Tonka truck. I used 3 sheet cakes for the main body parts, French Curlers dipped in chocolate … Read more 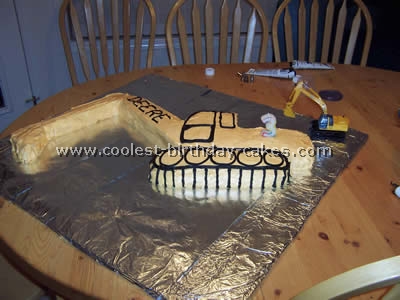 Other than running to the grocery store at 10:00 pm for more yellow food coloring this dump cake was fairly simple to make. You will need two 11 x 13 cakes and a fairly large (4 ft x 4 ft) piece of cardboard to assemble it on. Step 1: Cut out a section of one … Read more 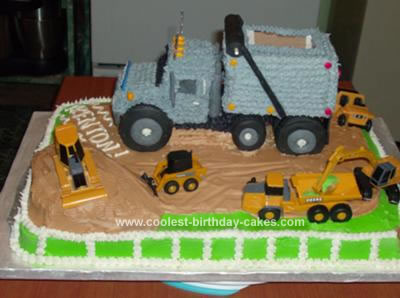 I made this Construction birthday cake for a four year old friend of mine. The base cake, which formed the construction site, was a yellow cake and the dump truck was a pound cake. 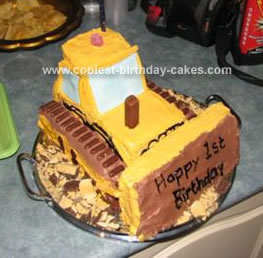 I made this bulldozer cake for my son’s first birthday. It was made out of 2 loaf tins (large and medium) and a 24cm square cake. I used 4 Green’s buttercake packet mixes. To construct it I used the large loaf cake for the body of the bulldozer, cut the medium loaf as the cab … Read more 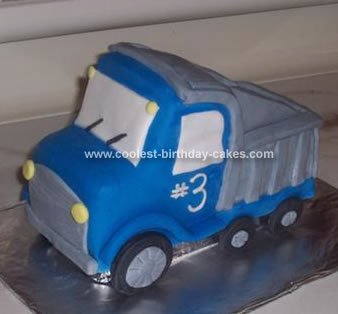 I made this Dump Truck Birthday Cake for my son’s 3rd birthday. I got the idea from a Wilton Fondant Yearbook. We used blue and grey to match my husband’s flat bed truck. To make the truck I covered a Styrofoam block with foil to raise the cake. For the truck body, I baked chocolate … Read more

To make this construction cake, I started with a rectangular cake. I printed the image off on the computer, and placed it on to the cake. I carved around the paper to shape the cake. Then, I iced the Shrek cake using butter cream icing. 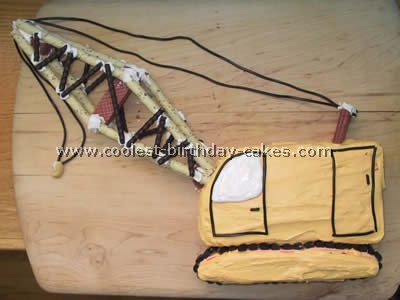 My son announced he did not want a dump cake for his construction-themed 4th birthday party but a crane cake! And not only a crane but a crawler crane — not a truck crane. (No using of cookies or doughnuts for wheels!) Well I like a challenge. The crane arm is pieced together with Pepperidge … Read more 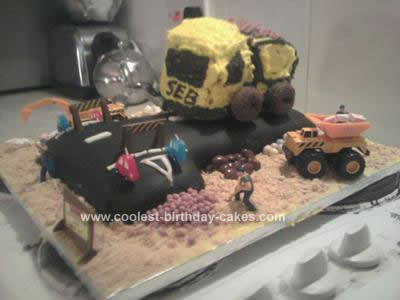 This Construction Site Dumper Truck Cake is my second attempt at making a creative birthday cake, the first one was a Disney princess castle. I made this for my nephew’s first birthday and was told by my sister that the theme of the party was dumper trucks and diggers. So I started off thinking about … Read more 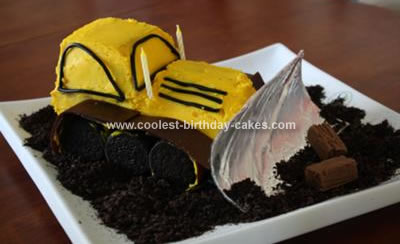 With a little boy who loves bulldozers and me keen to try cake making, this seemed to be the best way to do my first decorated bulldozer cake. I made a cake in a 27cm long loaf tin that had pretty straight sides. I then cut the top 1/3 of the cake off and placed … Read more 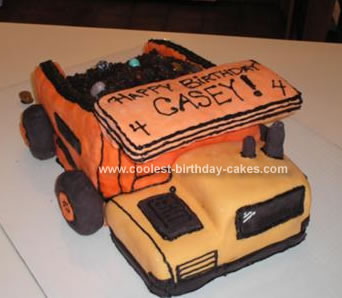 This dump truck cake was the second cake I have every made. It was more of a challenge than I thought it was going to be. I first made a homemade chocolate cake in a half sheet pan. I then cut out the shape of the truck free hand, and set a side the extra … Read more

This is my sons 1st birthday cake – a dump truck. I used 3 loaf pans and cut out the shape of the front of the truck in one and cut a hollow in the other for the dump and used the other to fill in and heighten it. To join it I used a … Read more 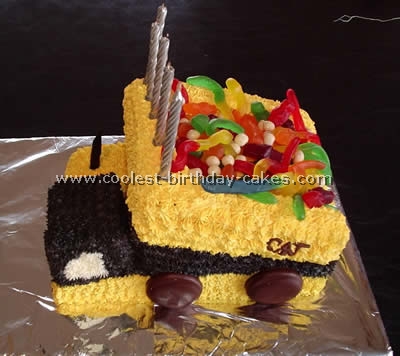 We live in a mining town and my son is obsessed with the haul pack trucks his dad fixes. I made this dump cake out of 3 23cm cakes. One cake I cut a little off one side to make it rectangular and that was the base piece. I used the next cake to create … Read more 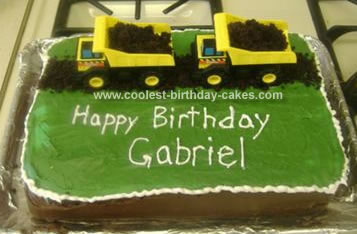 I made this Tonka cake for my son’s 2nd birthday, it was a Tonka theme party. It is 2 13×9 cakes layered. I used the extra cake from when I leveled it for the dirt path and the dirt in the trucks. I found some trucks he had in his toy box and used them … Read more