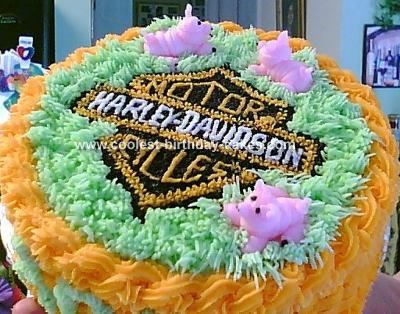 This motorcycle cake was made for a friend’s husband, and we all know that a Harley is the only “true” bike. The cake was a great yellow cake, baked in 8″ pans, prepared the standard way. The cakes were frozen,(always!),overnight. I leveled the cakes, torted them, and filled them with a purchased Mississippi Mud pie … Read more 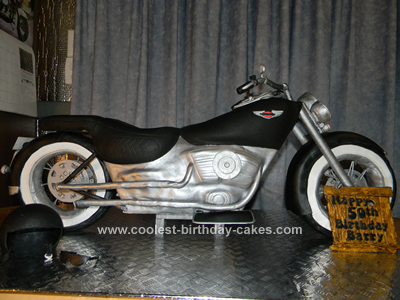 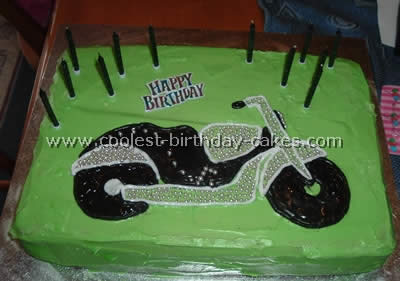 I tried to keep the design of the bike very simple. I used black icing for the major design and silver cachous to give the chrome effect then outlined this with white icing to give definition.

I made this Dirt Bike Birthday Cake Design for a friend of mine, she has twin boys who love their dirt bikes. I baked square chocolate cakes (10×10) and stacked 3 together with the filling and froze them overnight. I carved it so the bikes weren’t just flat on the cake. I covered them in … Read more 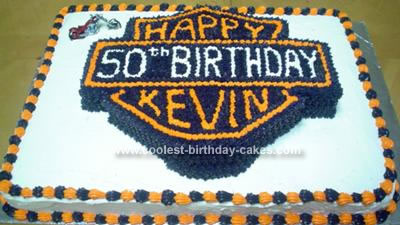 I made this Harley Davidson cake for a 50th birthday party. I made the cake with 2 13×9 cakes side by side. One yellow and one chocolate. Then I baked another 13×9 yellow cake and put it one top of the other ones long ways. I got a picture of the Harley Davidson logo online … Read more 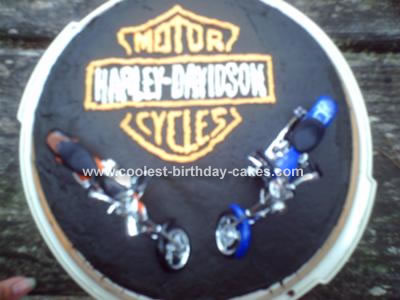 I made this Harley Davidson cake for my mom’s husband and he loved it. I took advice from another cake maker on how to get the designs transferred to the cake easier and found it worked great for me. That is to trace the picture on wax paper with a sharpie. Flip the paper over … Read more 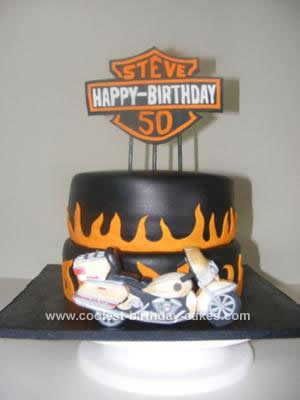 The base of the Harley Davidson Birthday Cake is just a simple sheet cake with white frosting. The emblem in the middle is made with black fondant. Icing was used to pipe the letters on. 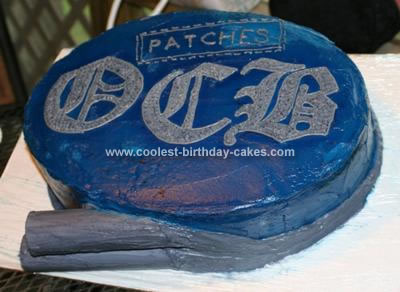 This motorcycle club emblem cake was for a Club member’s birthday. His Nickname is “Patches”. It was made in an Oval Pan (triple layers) with the OCB to match the club symbol. The “Pipes” were added with papertowel rolls cut diagonally & pressed slightly into the cake after it was already frosted. I was surprised … Read more 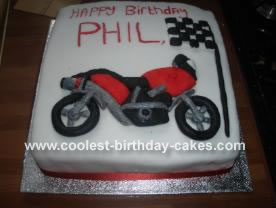 I made this motorbike cake for my friend Phil on his birthday as he is a motorbike fanatic. I printed an image of another cake and a motorbike so that I would have a rough idea of shape and the separate parts to the bikes detail. I made an 8″ sponge cake filled with homemade … Read more 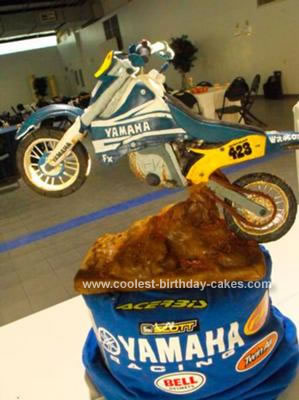 I made this groomsmen motor cycle cake for my cousin. It is an exact replica of his dirt-bike, a Yamaha WR-450F. It is sculpted from German chocolate cake(his favorite), and has rice-crispy treats, fondant, licorice chains and wiring, has a light up Speedometer, and the front wheel spins. The frame is made of wood (to … Read more 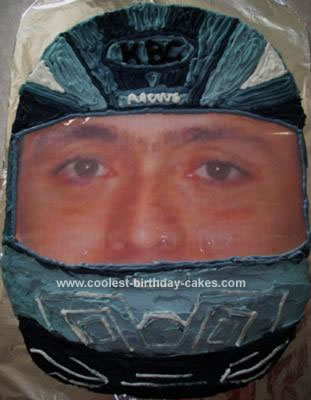 My son-in-law Nick is a motorcycle guy. For his birthday we secretly took a picture of his helmet and then I recreated the pattern as best I could to make a motorcycle helmet cake. I baked 2 cake mixes in a large roasting pan, allowed it to freeze then cut a slightly oval shape. I … Read more 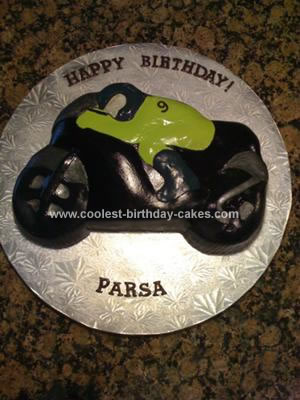 I made this Motorcycle Cake for a 9 year old boy. I purchased the pan from this site. After letting the cake cool for a few hours I cut the cake into 2 to put a layer of chocolate icing inside and then put a very thin layer of icing around the entire cake. I … Read more 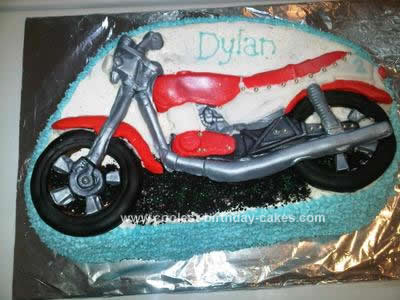 This Motorbike Cake is for a friend’s son’s 2nd birthday that had a biker theme. I used a pan (from amazon) with the motorbike outline part of the pan. I made another rectangular cake as well to make sure the cake would be big enough. I put the rectangular cake underneath and carved the corners … Read more 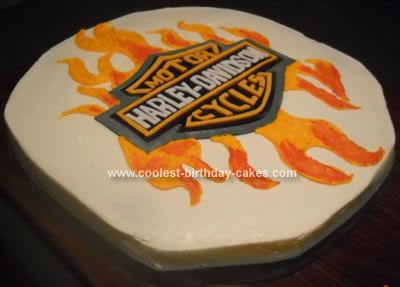 I was asked by a woman at my son’s preschool if I could make a homemade Harley Davidson cake for her husband’s surprise 39th birthday party. He is a big fan of Harley’s (she wanted just the logo). I gave her some ideas and pics of other cakes and she picked one with the logo … Read more 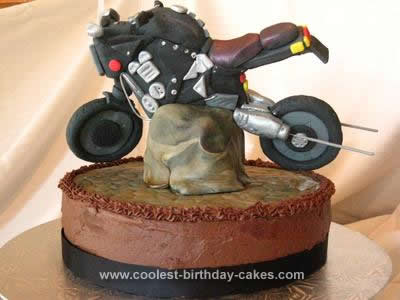 This Motor Cycle cake was for my husband who turned 50 this year! I made the motorcycle completely out of fondant and a small triangle of styrofoam for the engine compartment. The windshield is cut out of a sour cream lid and the wire pipes were cut from florist wire. The tires were attached using … Read more 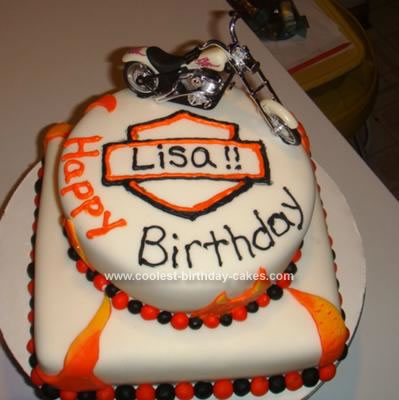 This cake was for my co-worker and best friend’s birthday. I love watching Cake Boss and Ace of Cakes. I also love learning new things so I decided to try and take a swing at using fondant. First time ever and I wasn’t too keen on doing it. I only had one size cake pan … Read more 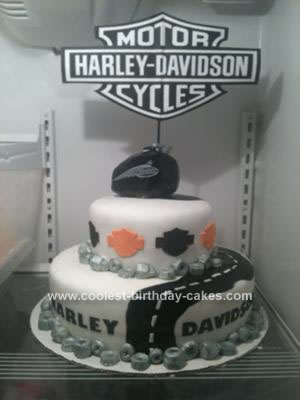 I made this Harley birthday cake in my home kitchen for my husband’s 40th birthday. He loves his Harley so this cake was a big hit. This cake was on of my favorites that I’ve made to date. I made two cakes, a 10in and a 8in. I layered each cake and filled the center … Read more 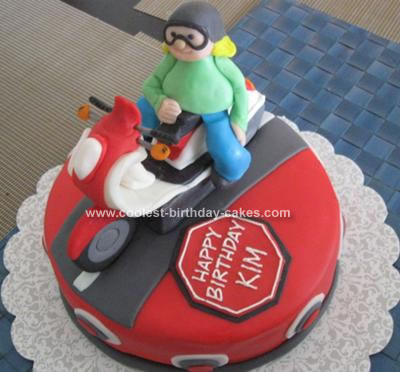 I made this homemade scooter birthday cake for a friend who owns a scooter similar to this one. I had a photo of her exact scooter as my guide. It is a chocolate cake covered in buttercream flavored fondant (store-bought) and the entire scooter and figure is made of fondant as well except for a … Read more 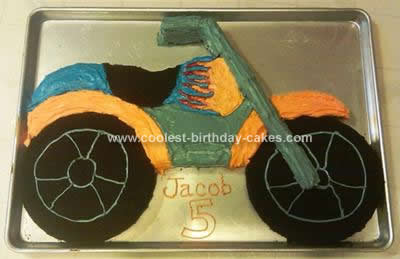 My son told me everyday, for weeks before his party that he wanted a motorcycle cake. I looked and looked online and got some ideas but couldn’t find exactly what I wanted. So I designed this Motorcycle Cake. I used 9″ inch rounds for the wheels and two 13×9 inch cakes for the rest of … Read more 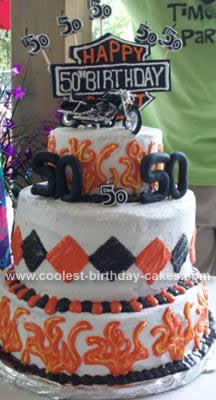 My uncle is really into Harley Davidson’s, so my aunt asked me to make this Harley Davidson Birthday Cake. This is the 3rd cake that I have made, and I thought it turned out pretty good. The top and bottom layers are vanilla pound cake and the middle is chocolate pound cake. Each layer is … Read more 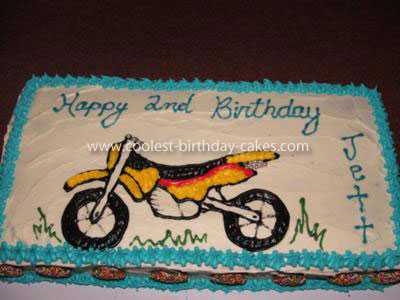 This Coolest Motorbike Cake was inspired by a very happy little 2yr old motorbike fan. I used a simple butter cake recipe in a rectangler tin and iced with with butter icing. I found this very easy to work with as you can change the consistancy of the icing and really doesn’t need to be … Read more