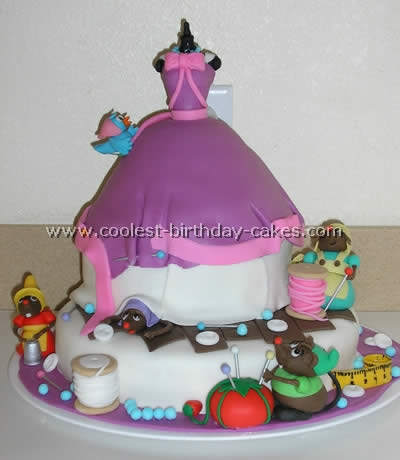 This Cinderella birthday cake is the exact replica of Cinderella’s dress from the movie. I used the wonder mold with a 6″cake on bottom of wonder mold and a 10″ for the base. Very challenging but worth every minute of it. All was fondant accents 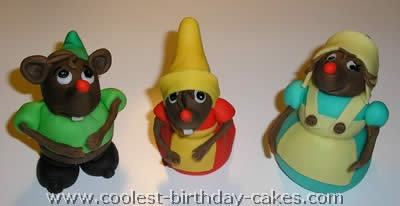 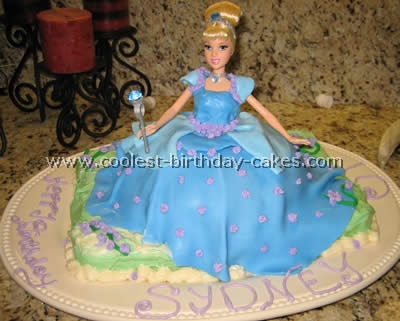 This website inspired me to make my own Cinderella birthday cake using all of your suggestions for your cakes! Thank you! I made two cakes, a flat rectangular cake for the base and a Pyrex-bowl shaped caked for her dress. I iced both cakes and placed the “dress” on the base. Then I took off Cinderella’s legs, wrapped her lower half in saran wrap and stuck her in the hole I cut out at the top of the dress cake.

I worked two different versions of food coloring into the fondant (a darker blue for most of the dress and a lighter blue for the accents). I rolled out the fondant and layered it over Cinderella for her skirt letting it naturally fall over the base in folds. I tried to then make the upper part of her dress and connect it to the lower part and then created the accents. I found the fondant a bit difficult to work with but overall it was kind of cool! I used icing to pipe flowers over areas on the dress where I made mistakes or wanted something a bit “more.”

My five year old daughter definitely enjoyed her Cinderella birthday cake and it was a great learning experience though it took quite a bit of time, about three hours from start to finish! I’m an amateur!

Cake by Jackie W., Portland, ME 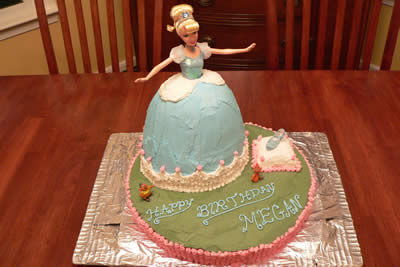 I had a lot of great tips from this site for making a Cinderella birthday cake so thank you all! This was the most fun cake I’ve ever made. I purchased the Cinderella Barbie which my daughter wanted as a birthday gift so it was a 2-for-1 cake decoration and toy!

For her dress I baked two boxes of cake mix divided between an 8 inch round pan and a bowl with a nice dress shape (the bowl wasn’t tall enough on it’s own to cover her lower body so I used the 8 inch pan to add another layer to the bottom of the gown). Then I made another large round cake to put her on. I hollowed out the middle of the bowl shaped cake, wrapped Cinderella’s lower body in Saran Wrap to protect it from the cake and frosting then slipped her into the hole after stacking the cakes together. I used some scrap pieces to build the little pillow for the glass slipper.

Everything was frosted with homemade buttercream icing. It was a big hit! 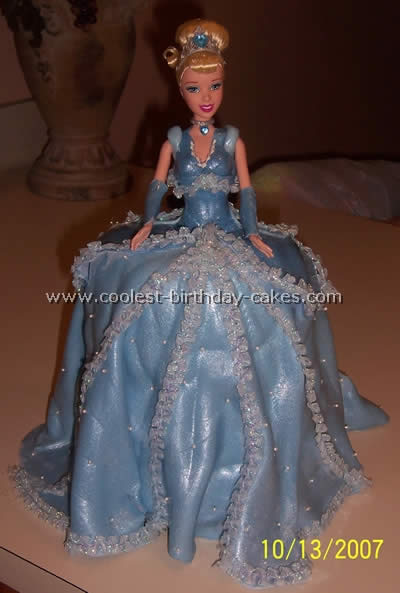 First of all I’d like to thank Kathy my friend of 25 years for driving three hours to create this Cinderella birthday cake with me for my three year old daughter. I searched the web and nothing compared to this site. It gave us so many ideas and we combined many to come up with our cake.

We started with simple box cake mix in a 10″ and an 8″ stoneware bowl. After stacking them on top of each other we frosted them with butter cream frosting. She purchased a Cinderella Barbie doll and removed the clothes. The dolls bodice was tailored out of fondant using Wilton cornflower blue icing color.

The doll was then placed in the middle of the cake and fondant was draped around the cake to create her dress.

Non-edible ribbon was hot glued onto the fondant. Decorative pins and a fondant tool created the quilting pattern. Edible glitter was sprinkled on to finish off the design. Even though the fondant had to be removed before eating it turned out excellent.

The whole decorating process took about six hours but this was the first time we ever used fondant and attempted a cake like this. Even if you don’t think you can do it grab a friend and start creating. The memories we made making this cake were priceless. I’ll never forget the look in my daughter’s eyes when she saw it. 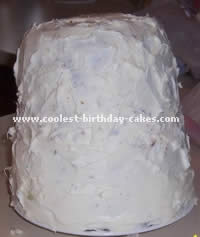 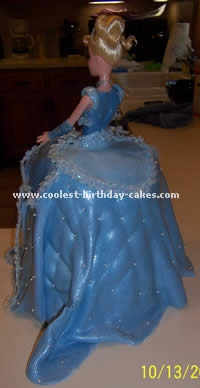 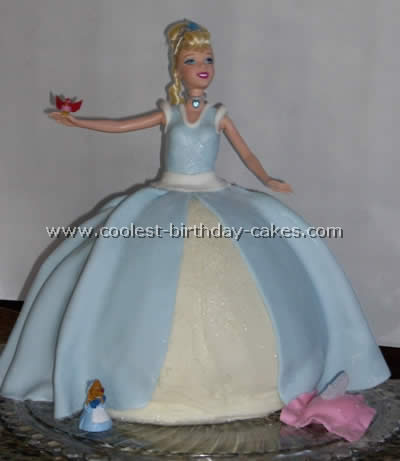 This was the first cake I’ve ever made. I used all the information from the web for a Cinderella birthday cake. I had the help of two friends (all non-bakers) but everyone was blown away with the results. I used 100% marshmallow fondant and decorators’ buttercream icing. I baked the cake in the stainless steel bowl from my Kitchen Aide Mixer. It was a perfect fit. Two cake mixes filled the bowl and then I made a tube out of foil to insert in the middle for even cooking.

I covered the cake in buttercream and then layered the fondant over the icing. It was an amazing cake. I will definitely use the fondant icing again. Thanks to everyone who posted tips.

Cake by Paula A., England 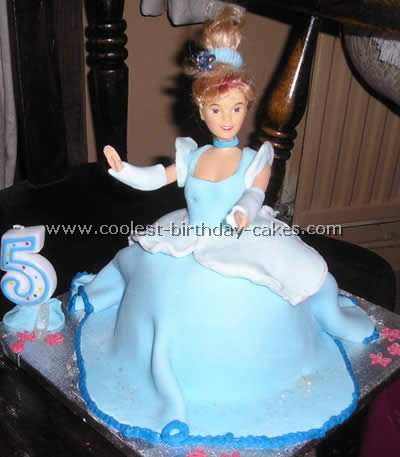 I made a basic cake mixture in a pudding bowl then sliced it in layers and filled with jam and butter cream. Then spread outside of cake with rest of butter cream and covered in fondant icing I had colored blue as near to Cinderella as possible. Then put a special cake Barbie that has a spear on it to fit into the cake into the top and dressed the Barbie in icing, made gloves and put a sparkly hair accessory on.

Everyone was delighted with this Cinderella birthday cake including me!

I made this Cinderella cake for my daughter’s princess birthday party. The bottom half is a three tier wedding cake cut and shaped and the entire top is made of rice crispy treats and fondant. I used boxed cake and canned icing. 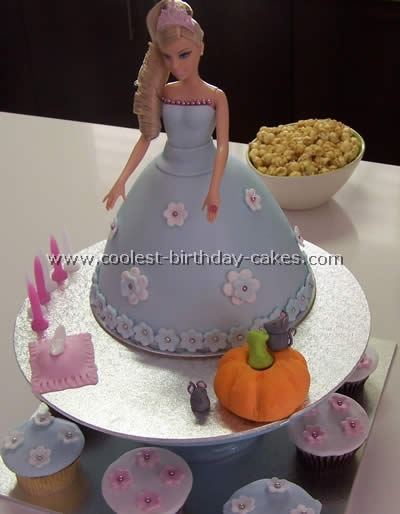 I made this Cinderella cake using a Dolly Varden tin. I layered the cake with chocolate ganache and also covered the entire cake with ganache before applying the fondant. I brushed the fondant with luster dust to create some sparkle. I made the pumpkin, mice and pillow from modeling paste.

The cake was for my six year old niece’s party so I also made cupcakes to match.