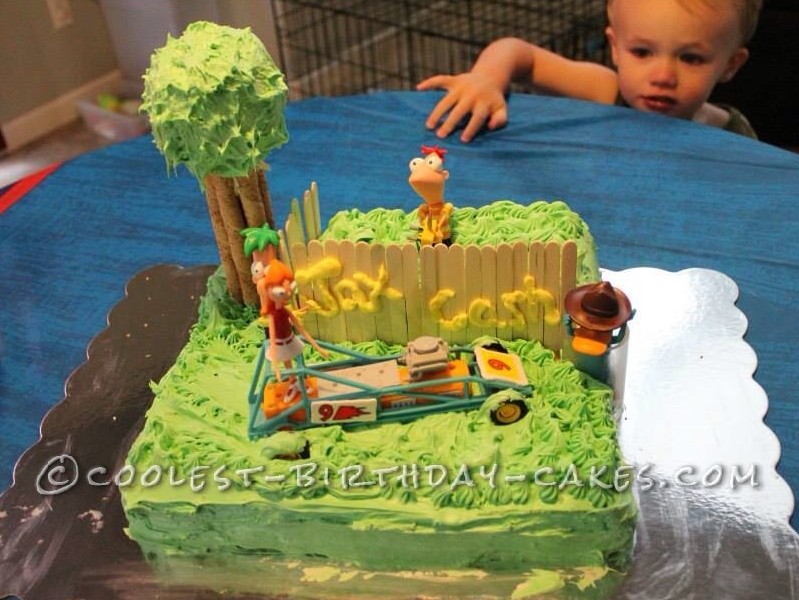 I enjoy making my kids a themed cake every year. This year they wanted a Phineas and Ferb cake. I knew this was going to be hard to find any decorations for because it’s not really something mainstream stores carry. So, I ordered a play set on amazon for the decorations. I figured the kids could play with it afterwards so it wasn’t a big deal.

I hate fondant so I used buttercream icing. I dyed the icing with green food coloring. For the grass I piped on icing. I cut out a corner of the cake for Perry to go down the tube… like in the cartoon.

I made the tree out of peroutte sticks and I put a Styrofoam ball on top using a toothpick. I piped more icing onto the tree to make it look real. This was the hardest part. I had to put the icing on the Styrofoam ball and let it sit in the fridge for a couple of hours.

The fence is made out of Popsicles sticks. In my first attempt I attempted to “glue” them together with icing, but that didn’t work, so I just stuck them in the cake. I made it look like Ferb was writing the kids’ names on the fence by putting icing on his hands. It was difficult to write the name on the fence since it was vertical. If I had it to do over I probably would have tried harder to glue the fence together with icing before putting it on the cake. Phineas had the “remote control” in his hand to make it look like he was controlling the car.

I wasn’t sure what to do with Candace, so I just threw her on the car and tried to make it look like she was holding on. I also dragged the car through the icing to form tire tracks. All in all, it took about 2 hours to make this cake!