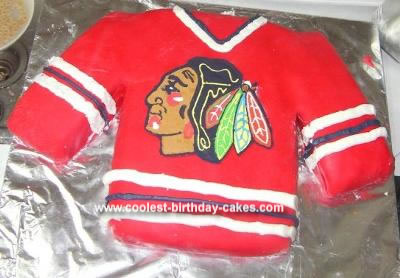 My oldest son is a huge Chicago Blackhawks fan – and asked for a jersey for his birthday cake.

For the homemade Chicago Blackhawks cake I started by making the logo which took about 4 hours in total. I printed the logo out and traced it onto waxed paper. I then flipped the waxed paper over, and using royal icing and a size 3 tip – outlined the symbol in black. I then filled it in with all of the different colours. When it was dry it was just a matter of carefully flipping it upside down and attaching it to the cake with some butter cream.

I cooked up two 9×13 inch cakes using one for the torso and cut the second into thirds (width wise) and used two of the thirds for arms (I angled them so they fit right against the torso) I buttercreamed it and then added some red fondant. I had initially wanted to do the stripes on the jersey in fondant – but ran out of time so (hastily) just piped them on.

It was a HUGE success and the homemade Chicago Blackhawks cake got a lot of comments from people who were at the party location.