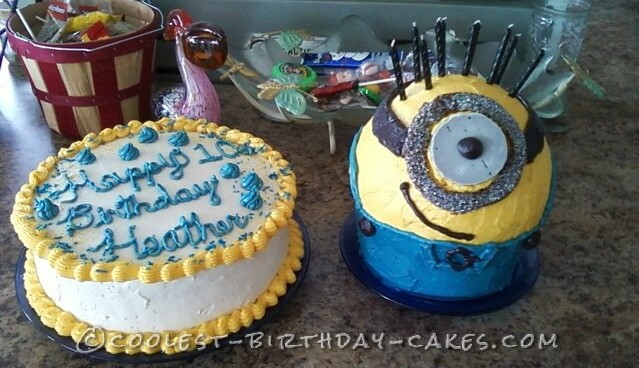 I decided to attempt to make this Minion cake for my daughter’s 10th birthday, she wasn’t so confident in me but I proved myself, and this cake turned out great!

I used a giant cupcake silicone cake mold to make the minion, and just made the lower half smaller than what it would normally be, then used frosting to round it out more to look like a minion and not a cupcake. I used homemade frosting: 1 stick butter, 1/2 cup shortening, 1 cup sugar, 2 tsp vanilla, mix well with electric mixer, 4 TBS flour and 1 cup milk (cook flour and milk in small pot til thick, then cool and add to other ingredients).

I made at least 2 batches of the frosting for this cake. After assembling to two halves, I tinted some frosting blue and frosted the lower half to make the pants of the minion. Let it chill in fridge to set up, then tinted some vibrant yellow frosting and covered the top half, I thought it would be difficult to round out the cupcake shape but it was actually rather easy, the challenging part was to not get the yellow into the blue.

I then used a little more blue on the bottom to make sure the shape was right. Then put it in the fridge overnight so the frosting would be nicely set up to finish decorating. The next day I placed a cookie on it for the eye, using a stripe of yellow to “glue” it on (a chocolate with white frosting stripes works great). Then with 2 long tootsie rolls, very slightly heated, rolled them together to form the goggle. Once it cooled and set, brushed lightly with corn syrup and coated with silver sugar.

After the goggle set up, glued on with yellow frosting. Then made the strap for the goggle using a can of black frosting (which is quite difficult to maneuver, I’d recommend a tube or something similar instead), also its a good idea to mark with a toothpick for  the strap to be sure it is straight. Then to finish it up I used more of the blue and made straps for his pants and the pocket on the front of his pants using a flat tip. Then, using the black, I filled in the hole of the cookie for the pupil, made buttons for the straps of his pants, put the “G” on his pocket, and made his sly little smile.

For the finishing touch I put 10 black candles on top for his hair. The cake was a hit for sure and was not as hard as I thought to make it (especially being the first cake like this I have ever attempted!). My father in law even asked me where I bought it from. 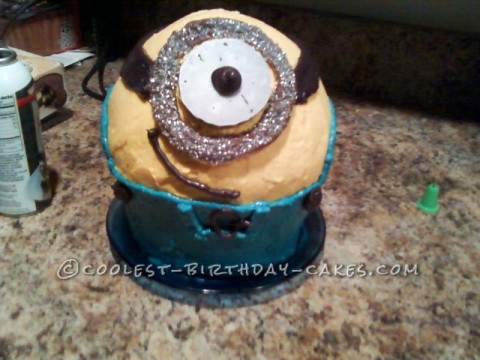 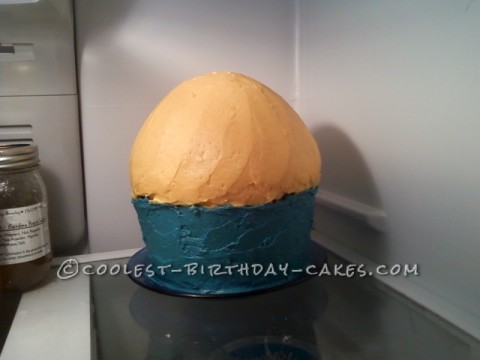