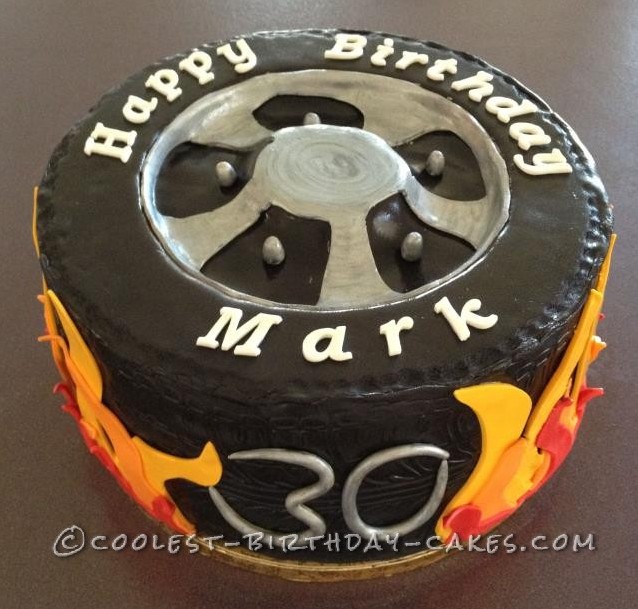 When I was asked to make this tyre cake I was a bit scared but I went ahead had a go. Many hours later after I managed to get away from Google ( who has a despicably diabolical hold over me), I drew, my template for the rim and hub. In the end I had to ask my daughter who is 21 to do that for me as it has been a very long time since I used a protractor.

The actual making of the cake is basically baking 2  10″ x 3″ cakes, torting, filling and crumb coating them. I bought a tread pattern from my local cake shop and then the fun started. If you have ever tried to use one of those things it’s not as easy as it looks and I wasted a lot of black fondant but eventually it started to look like it should… omg! Then I realized that I had covered the sides first when I shouldv’e carved and covered the top!! It took me a few hours to get that template for the hub done as I had to make 5 marks every 72 deg around the edge of the rim and then more 15 deg apart so I got the five holes in the rim. Ah… I need to go back to school! Who knew that you would need math to make cakes!!

Finally it all came together and I popped the top on, smoothed it into the dip and over the hub. Then came the hub itself, sprayed shiny silver and placed that in the middle. I had already made that once and realized that it didn’t fit because I hadn’t allowed for the dip in the rim… so second try and in it went. I had to pinch all around the rim to get the top to join the sides and then make some 3D flames to place on the sides of the cake. It turned out great!