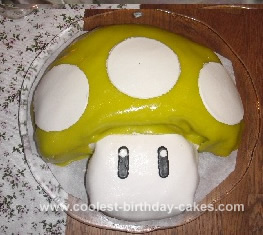 My girlfriend is a huge Nintendo fan, with particular love for Super Mario. Her 22nd birthday was coming up, and since it was her first birthday we celebrated together I wanted to do something special for her. And I came up with a 1-up Mushroom Birthday Cake!

All the ideas and ingredients were my idea. I didn’t look up a single thing on the internet, which makes me very proud, since it’s the first time I’ve ever made a cake.

Since her favourite flavor is mango, I decided to go for a cake that contains mango. I started with a round yellow cake, in three seperate layers. On the first layer, I put mango/passionfruit mousse with bits of mango. On the second layer I put a dark chocolate mousse with chocolate crisp in it. And on the top layer I put on a lot of whipped cream (to give it that mushroom shape) mixed with vanilla powder, since my girlfriend doesn’t like whipped cream.

My mother helped me to cut out (aka: forced me to letting her do it). The shape sadly didn’t come out exactly as I wanted it. I blame my mom for that.

Then I got two marzipan lids, one green and one white. From the white, I cut out the shape of three round ”spots” by pushing a glass to it. Then I took the smallest measuring cup I could find, and pushed it against the marzipan. They smaller spots came out a little bit too big though, so I had to cut it with a scissor. After that, we took half the marzipan lid and cut it into half. We then covered the ”face-part” of the cake with it. We cut of the excess.

Then, we covered the ”hatpart” with the green marzipan lid, cut of the excess, and used it to mend the cakes little holes (since the hat wasn’t entirely round).

Finally, I put on the three big spots, and cut black winegums in half, to make eyes. I took a little whipped cream and glued the smaller spots on. The cake became really big, and we’ve been munching on it since Sunday, and there is still cake left. And, on top of it all, it’s really delicious.