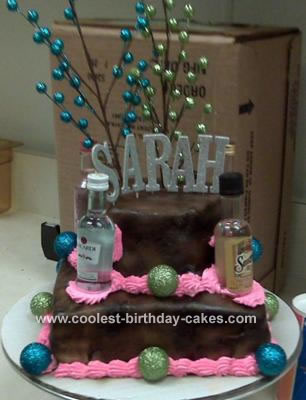 I made this 21st Birthday Cake for my sister. I used a store bought chocolate cake mix. I made 2 6 in circle pans and 2 9 in square pans.

After baking the cakes and letting it cool, I stacked the 2 circle cakes with a chocolate fudge icing in the middle. I did the same to the 2 square cakes.

I then airbrushed the cakes brown.

I put a pink border around the bottom of both layers. Then I placed round green and blue Christmas ornaments around both layers of the cake. I put extra icing on top of the corners of the square layer (around the circle layer) to hold the small bottles of liquor. After that I placed the green and blue branch ornaments on top of the cake and the letters that spelled out her name.

All the green and blue ornaments I found in a craft store in the Christmas decorations. The letters where in the scrapbooking aisle. I just glued them to some toothpicks so they would stand on the cake.