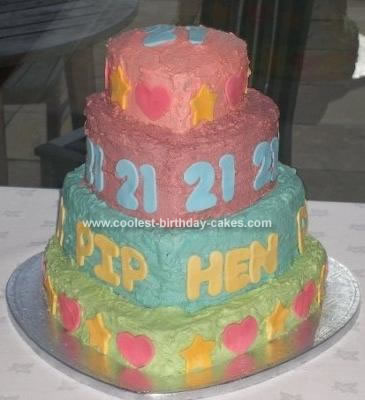 This 21st Birthday Cake was made for my housemates, Pip and Hen, who were having a joint party for their 21st birthdays.

I had never made a cake like this before so I had to read up on how to tier a cake properly. I also got some advice from a lady who worked in my local cake decorating shop.

I started with a sturdy cakeboard as I knew the cake was going to be heavy when completed! Each layer was made with a basic Victoria sponge mix (although I wish id used something like genoa or Madeira as it would have been more stable). Dowling rods were inserted into each layer, measured, then trimmed to size before being re-inserted and then having the next cake board placed on top and starting the process over again. The top three layers were all cut in half and sandwiched together with jam.

The top layer was a gluten free chocolate cake as Hen has celiac disease. This recipe was a basic chocolate recipe using gluten free flour with a good slosh of milk to make the mixture runny as g.f. has a tendency to be dry and crumbly.

The whole cake, once assembled, was covered in basic butter cream (butter, icing sugar, vanilla essence) each dyed with a different food colouring. I had already made the lettering and hearts and stars in advance and kept them flat in a box, separated by sheets of clingfilm. They were made out of royal icing, and i used cookie cutters to get the shapes/letters. Once the icing was on i just pushed the letters and decorations into the icing. I then sprinkled the cake in edible glitter to make it sparkle in the light.

Everyone at the party loved it (had to feed about 100 guests) and I was really complemented when people thought they had commissioned it from a professional shop!