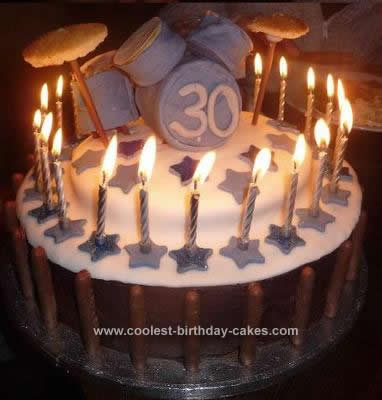 This 30th Drum Cake was my first attempt of making a fancyish cake and the most important thing for me was that absolutely everything apart from the candles was edible. Although it didn’t all go completely to plan the cake survived transit from kitchen to pub and it tasted good which was good enough for me!

The base is a 12’ 12 egg vanilla Madeira cake. Madeira is a lot easier to shape and less delicate than sponge which is why I chose it. The original plan was to make two but it came out a good 3’ thick so I scrapped that idea. The raised platform is a 4 egg lemon Madeira – I made two as this is the cake the drums are cut from.

I cut the base cake in half and used a 250g batch of chocolate buttercream to sandwich it back together (I’d heard Madeira was dry so overdid it somewhat!) I used more buttercream to get the lemon cake on top and then covered the whole top with apricot seedless jam, from what I can tell it’s half the price of apricot glaze and that’s the only difference.

The sides are covered in chocolate fudge and then chocolate fingers. The top was iced with a ready rolled piece of fondant to cover an 8’ cake, this fit perfectly to the edge of both cakes which was more miracle than planning. The drums were cut out of the lemon cake using cookie cutters and then cut down/joined together with jam to the correct sized. I then spent the best part of two hours colouring, rolling and swearing at the fondant before completing the covering of the drums. The drums skins are circles of rice paper jammed on and all of the supports/stool legs/kick pedal are made from mikado chocolate sticks.

Stars were made using cutters and alternately covered in edible glitter and the cymbals were pieces of cake rolled flat and then precariously balanced on top of tiny balls of fondant on the mikados at the last minute. How they were still on as the cake was brought out I will never know!