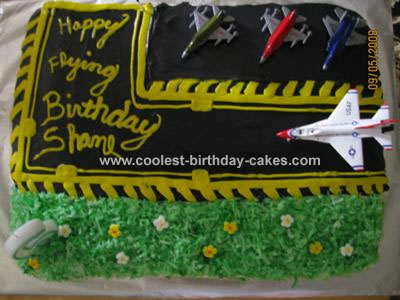 My son wanted an airplane cake for his 6 birthday. He specifically said he wanted a plane landing on the road made out of icing. So I baked a 11 x 15 cake. I put icing over the whole cake first then I took a toothpick to mark an air strip out with the large icing tip I piped out black icing for strip,then took Wilton large spatula dipped it in cup of water and then smoothed the icing out this also gave it a shine.

Using tip #47 for straight yellow lines then tip # 103 for the slanted yellow lines. In order to make the plane look as if it was landing I took 2 toothpicks for each end and taped them together making one side longer than the other. On the bottom side of the plane were screw holes I took just a tiny peace of handi- tacki, stuck it in the holes securely, then placed toothpicks in there. Then placed onto the cake.( Note: Do not place airplane on til you have cake to its party place.)

I took coconut dyed green w/ food coloring for the grass then placed sugar flowers in it. My son was so proud of his cake. It was a big hit. I enjoyed making it.