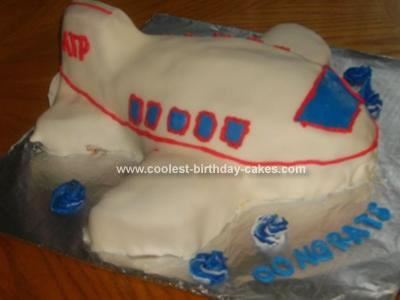 My husband got his Commercial Pilots License and challenged me to make him an airplane cake to celebrate. He wanted one that looked like the planes he was flying in flight school, but I wanted to make one to look more like the airliners he would be flying soon, and a women always gets her way. So this is what I did.

I made two 9X 13 in cakes and 1- 8 in round cake. I shaved the first layer of the 9 x13 like we always do for a flat cake but I left the second one with the baking bump to help with the shape and keep me from having a whole lot of shaving to do to the top. I then used the round cake and cut it in quarters using 2 full quarter pieces for the wings and I cut one of the other into the shape of the tail.

I carved the nose section with a bread knife and covered the whole thing in buttercream frosting, using a piping bag because of all of the carving it was to difficult with a spatula. I then covered it in fondant. This took awhile as I had never covered an odd shape before, you have to smooth from the top and make sure to get all the spaces, in order for it to look right.

I used blue fondant square cut outs for the windows and went around them with some red colored buttercream just for a more finished look. I also put some blue and white buttercream, together in a piping bag and squired some clouds on the side of the plane. I used fondant letters to spell out the congrats.

My husband saw it and said “where are the engines?” I could have beaten him up after all that work. LOL. But he loved it.