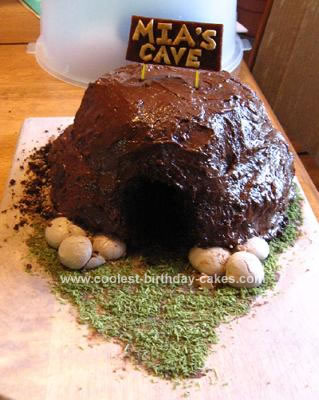 My friend’s about-to-turn-five-year-old daughter was into caves, so I was challenged to make an appropriate [dairy-free, nut-free, gluten-free, soy-free] birthday cake. Having never made a cave-themed cake before, I skimmed the Coolest Birthday Cakes website for inspiration and got some great ideas and useful tips for an Allergen-Free, 99% Edible Cave Cake.

I used a King Arthur gluten-free chocolate cake mix. I used a bundt pan to make the base and one 8″ round pan for the roof of the cave. I cut a chunk out of the bundt cake for the doorway and a small section of the corresponding area on the inverted round cake. I also scooped some of the middle of the round cake out to make a roomier cave with a domed ceiling.

Inside the cave I cut bat shapes out of fruit flats and hung them from the ceiling with uncooked corn spaghetti. I also rolled some fruit flat scraps into long cones and stuck them into the ceiling with spaghetti and to the floor with icing to form stalac- and stalagmites. For the crowning touch I put a battery-operated flickering tea light (like for Jack-o-lanterns) inside the cave and sprinkled some crystalline cake sprinkles onto the iced inside of the cave to add a geode-ish effect!

And by the way, I assembled the inside of the cave BEFORE gluing the round-cake top onto the base with icing! Once the top was in place, I trimmed it with a knife to achieve a domed shape. I iced it with Cherrybrook Kitchen’s chocolate icing (I accidentally softened the butter too much, melting it most of the way, for the icing, which is why I think it turned out so dark!?). The rocks are meringues with some cocoa powder mixed in – I Googled a recipe for that. The sign itself is a fruit flat; the letters are cut out of dried apple slices, and the posts are spaghetti.

Around the base of the cave I iced the platform with a thin layer of icing, sprinkled some cake crumbs and crushed GF vanilla cookies for dirt/sand, and, my favorite discovery, the grass is shredded coconut shaken up with some green drink powder (unfortunately the drink powder does list soy lecithin among its ingredients, so this is the one part of the cake that soy-avoiders cannot have, oh, and the tea light and candles were not edible, either!).

The party-goers were duly impressed and I had a great time making it! 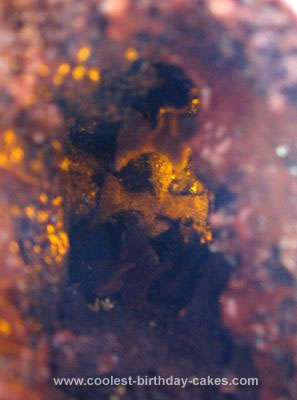